LITTLE groups of smokers hanging around outside cafés and pubs, puffing away and complaining about the smoking ban have now become a reality in Slovakia, just as in much of the rest of Europe. It will probably take a few years before Slovak society accepts an overall ban, but the effect of the stricter anti-smoking legislation that recently came into force can already be felt – or smelt – all around the country. 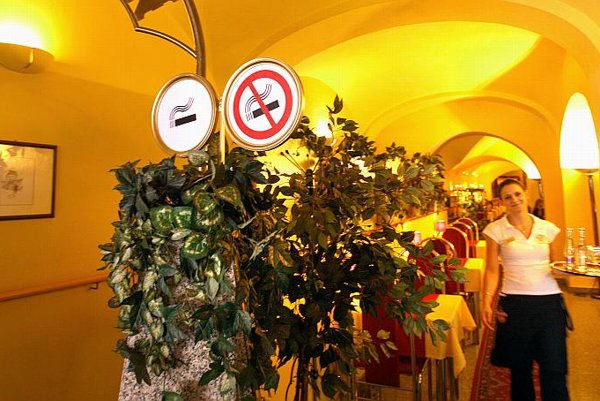 LITTLE groups of smokers hanging around outside cafés and pubs, puffing away and complaining about the smoking ban have now become a reality in Slovakia, just as in much of the rest of Europe. It will probably take a few years before Slovak society accepts an overall ban, but the effect of the stricter anti-smoking legislation that recently came into force can already be felt – or smelt – all around the country.

The law on protection of non-smokers, passed by the Slovak parliament in February 2009, came into effect on September 1 and, despite facing criticism for being inaccurate and ineffective, it has cleared the air in most Slovak restaurants, cafés, bars and pubs. According to the amended law, if a restaurant, pub or similar facility wants to allow smoking within its premises, it has to have a separate room for smokers, divided from the rest of the establishment by a solid wall. To avoid complications and reconstruction, many restaurant or pub owners have opted to go entirely non-smoking.

According to the general secretary of the Association of Hotels and Restaurants in Slovakia, Pavol Kašuba, rebuilding facilities proved either too expensive or technically impossible for many operators of bars and restaurants.

“There will not be too many examples where operators have separated rooms for smokers by a solid wall,” Kašuba said, as quoted by the SITA newswire.

As of September 1 smoking is also completely banned in public offices, theatres, cinemas, shops, museums and health-care facilities. Any violations of the anti-smoking law can be sanctioned with fines of up to €3,319 or even an operating ban on the facility.

“This bill represents an important milestone in the protection of non-smokers and a step towards the introduction of further limits on smoking in bars and cafés,” Róbert Ochaba from the Public Health Bureau, a government body which promotes public health, told the AFP newswire when the law was passed by parliament.

If respected and followed, the stricter anti-smoking legislation could help to reduce the smoking habits of the population at large, Imrich Šteliar from the National Monitoring Centre for Drugs told The Slovak Spectator.

“Perhaps thanks to stricter measures on several fronts [tobacco tax hikes, a smoking ban in some public places], the situation with smoking has stabilised and we have noted a slight fall in the numbers of smokers, but smoking among young girls, for instance, is on the rise and therefore should be continuously watched and prevented,” Šteliar told The Slovak Spectator.

Tobacco is the leading risk factor for premature mortality in the European Region, causing about 1.6 million deaths, the WHO reports. According to the TASR newswire, an estimated 62 percent of the Slovak population are non-smokers – the rest are regular or occasional smokers.

Strict anti-smoking legislation has been introduced in about a third of the EU so far.

In March 2004 Ireland became the first country in the world to impose a total ban on smoking in workplaces. Irish legislation bans smoking at workplaces, which automatically means a ban on smoking in pubs and restaurants. Other countries, such as Italy or the UK, which were once thought of as belonging to the ‘everybody-smokes-here’ club, soon followed suit. They now say that their experience has been uniquely positive.

“In the beginning customers used to complain every time they had to stand up and go for a smoke outside, but there was no decrease in customers coming to my bar,” Fulvio Santi, the owner of the San Giorgio Hotel and Bar in Udine, Italy, told The Slovak Spectator.

“But it took only a few months for people to get used to the new rules; they even started to smoke less. Indeed, I used to smoke a lot, and was one of the first ones to cut my daily dose of tobacco and now I am a non-smoker.”

Santi said he would welcome it if smoking were also banned in hotel rooms and toilets, which at the moment are regarded as private places to which the anti-smoking law does not apply.

“In my hotel I have installed ‘no smoking’ signs everywhere, so you can’t smoke in the whole building and I don’t care whether you like it or not,” Santi said.

The UK and Ireland remain the only EU member states where a full smoking ban has been introduced for all work and public places, while in another eight – Italy, Malta, Sweden, Latvia, Finland, Slovenia, France and the Netherlands – smoking is banned at work and in public places, but the option to have an enclosed smoking room has been kept.

Since smoking and passive smoking constitute significant sources of mortality, morbidity and disability in the EU, and significant differences in the level of protection from exposure to tobacco smoke persist both between and within member states, the European Commission (EC) has recommended that the Council of the EU – and thus member states – take measures in national legislation to achieve the goal of EU-wide effective protection from exposure to tobacco smoke in indoor workplaces, indoor public places, public transport and other public places by 2012.

According to the EC, the comprehensive smoke-free policies in effect in some countries have “already proved to be effective in reducing the tobacco-related burden while not harming the economy”.

“Smoke-free policies have been shown to reduce tobacco consumption, encourage quit attempts and reduce smoking uptake among young people,” the EC stated in its Recommendation on Smoke-Free Environments, adding that nine out of 10 EU citizens support smoke-free workplaces and public places and studies have shown that this support tends to increase after the introduction of smoke-free policies.