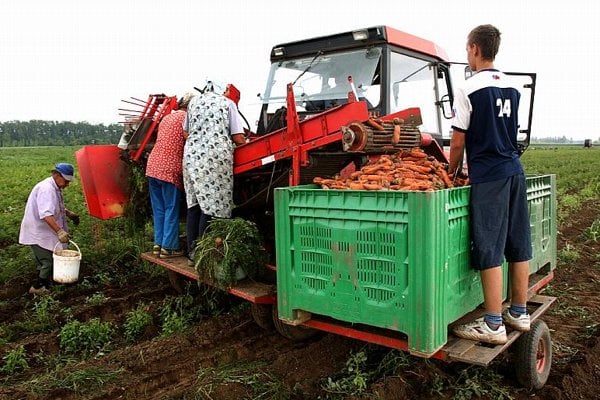 “The sector is now on the brink of collapse because the financial crisis has been coupled with a crisis in demand, accompanied by a dramatic drop in sale prices of all key commodities of agricultural production,” Stanislav Nemec, the spokesman of the Slovak Agriculture and Food Chamber (SPPK), told The Slovak Spectator.

The chamber has been complaining for many months about the low representation of Slovak-made products on the shelves of major domestic retail chains, saying that domestically-sourced food products account for 80 percent of sales in Austria, Germany and France while this share in Slovakia and the Czech Republic stands at only 50 percent. In response the chamber is pondering some changes in the payment of advance taxes and also asking for subsidies from the non-taxable part of the income tax.

The global financial crisis has complicated Slovak farmers getting access to loans and has clouded the financial stability of the whole agricultural sector which now has a higher risk factor in the eyes of financial institutions, Nemec said.

Slovakia also faces the prospect of a lower crop harvest for 2009, at about 417,200 tonnes, which would be a 14.6 percent drop according to Statistics Office data. However, the Agriculture Ministry said that the country’s food supply will not be endangered.

Despite the lower crop yields and the expected year-on-year decline in the production of grain and rapeseed, Slovakia’s self-sufficiency in the production of agricultural commodities will not be harmed, Stanislav Háber, spokesman of the Agriculture Ministry, told The Slovak Spectator.

Háber said that there are good enough production prospects for all the important agriculture commodities to not only cover the needs of the domestic market but also to permit exports.

“The problem, however, is the prices – which since fiscal year 2007/2008 have dropped by approximately half and in some cases by even more,” Háber said. “Currently, the sales price of grain has declined to a level last seen in the time of socialism, while production costs are much higher.”

For the period from January and May 2009, Slovakia exported €668 million in agro-food products and imported €1.074 billion in comparison to the same period in 2008 when exports stood at €832.8 million and imports at €1.213 billion, according to data provided by the Agriculture Ministry.

In order to determine to what degree Slovak farmers are able to face this severe competition in prices, Háber said that to answer that question one needs to analyse developments over the past two decades.

“The decrease in the protection of domestic producers, agreements about cutting customs duties before we entered the EU, and the complete liberalisation of trade within EU countries have systematically led to cutting domestic production of some commodities,” Háber said.

“Slovakia, from the aspect of the EU, is producing only 1 percent of the total EU production of these commodities and thus the country cannot handle the fall in prices. Today these prices are generated by the immense dominance of supply over demand.”

Nemec stressed that especially now during the global economic downturn, Slovakia is at a disadvantage when it comes to differences in agro-subsidies when comparing the old and new EU members.

“In practice, western European farmers are getting direct payments at 100 percent from the EU budget while their competitors from the new member countries, including Slovakia, will work themselves up to this level only in 2013,” Nemec said.

“Not to talk about the fact that they still draw on 30 percent co-funding from the national budget which the governments and parliaments might not always fully secure. We felt the impact of this during the first three years of our EU membership which, along with the previous under-capitalisation and the relatively high transformation expenses of some companies, has complicated the situation of the whole Slovak agriculture sector.”

Asked to what degree Slovak farmers are able to face price competition from imported agricultural commodities, Nemec explained that the prices of the main commodities are not shaped in Slovakia but are subject to the global influence of European and world markets.

“Domestic farmers are competitive and in many cases they surpass foreign producers in the quality of their production,” said Nemec. “However, their handicap of lower government support is difficult to level. The drop in prices is causing existential problems to farmers here because they essentially have no reserves to help them face these developments.”

The sale of agriculture products directly from producers to consumers, as well as ecological farming methods, is being more intensively discussed in Slovakia. These methods should mainly be helpful for smaller farmers but they must also meet tough hygiene standards which may be very costly for many.

“Sales from original producers to consumers are a way to improve the condition of the agro-economy in Slovakia,” said Nemec. “On the other hand, farmers are warning that in no event will it present a magic solution that would save the farms in Slovakia. No more than 5 to 6 percent of agricultural production is sold in this way so the total stabilisation and revival of Slovak agriculture will call for a whole complex of systematic solutions in the area of support, new forms of organising production and retail sales, taxes, consumer education, science, and research and development.”