THE CAR-scrapping scheme launched by the Slovak government in March has fulfilled its goal of minimising concerns among Slovaks about purchasing a new car during the economic downturn. This measure, as expected, boosted new car sales and made smaller and less-expensive models much more popular. And even though car manufacturers think that demand will remain sluggish through to the end of the year, they are ready to tempt Slovak customers with several new models. 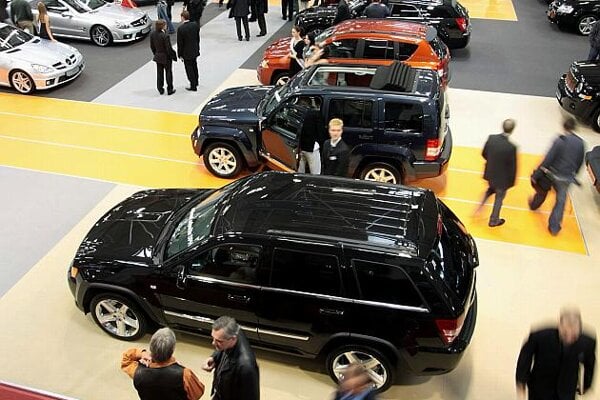 THE CAR-scrapping scheme launched by the Slovak government in March has fulfilled its goal of minimising concerns among Slovaks about purchasing a new car during the economic downturn. This measure, as expected, boosted new car sales and made smaller and less-expensive models much more popular. And even though car manufacturers think that demand will remain sluggish through to the end of the year, they are ready to tempt Slovak customers with several new models.

The Slovak Spectator spoke with Cédric Pourcher du Chene, the general director of Citroën Slovakia, Lucia Busquet, public relations manager at Škoda Auto Slovensko and Jana Rajčová, public relation manager at Renault Slovensko about the impact of the government’s car-scrapping bonus, their expectations for car sales to the end of the year and about new models they expect to introduce in Slovakia.

The Slovak Spectator (TSS): How has the car-scrapping bonus affected sales of cars by your company?

Citroën showed courage during the launch of the car-scrapping programme and was the first automobile brand that gave its clients interesting offers for its models. The results are very positive for Citroën: during the first seven months of 2009 sales of its passenger cars jumped by 24 percent, adding 0.9 percentage points to its market share of 7.1 percent.

Compared with other car brands, Citroën has not focused its sales on only one model. Among customers using the scrapping bonus, the Citroën C3 Picasso, which is produced in Slovakia’s Trnava assembly plant, was the post popular. Other cars in demand were the Citroën C4 and the Citroën Berlingo.

In general, customers buying cars using the car-scrapping scheme were looking for less-expensive cars and that has been proved by statistics on the Slovak market: the share of small compact urban cars rose from 48 percent in 2008 to 56 percent so far in 2009.

The old-car scrapping bonus met its main task and helped mitigate concerns of customers about purchasing a new car. Most buyers using this bonus were interested in the most-often sold model on the Slovak market over the long term – the Škoda Fabia. But for many others, the Škoda Octavia model from the mid-size class was also attractive. These models were very popular among this specific group of customers.

For other customers, along with the traditional high interest in the Fabia, Octavia and Octavia Tour models, interest in the Roomster and the luxurious Superb models has not decreased either.

The scrapping bonus helped to boost the sale of small cars and mid-sized vehicles. Renault Clio, Renault Clio Grandtour, Renault Thalia and Dacia Sandero have been the biggest bestsellers in our offer.

TSS: How has the implementation of the European Commission’s directive, which enables entrepreneurs to deduct the value-added tax (VAT) on new light commercial vehicles which do not have the cargo space clearly divided from the passenger area, affected the sale of your cars?

Citroën always reached sound results in selling N1 [light commercial] category vehicles which permitted VAT deduction in Slovakia. In June, Citroën was the second most-sold brand in this category with an almost 13 percent market share. Though it is too early to estimate the global impact of this new directive, Citroën will remain among the leading car brands in this market segment.

The sales statistics indicate that Slovak business people appreciate this change. The fast response of Škoda Auto Slovensko to the new directive enables buyers to deduct VAT on any model of Škoda cars. We were faster than our competition and that has been seen in an increase in our sales of N1 category vehicles.

We have registered increased interest from corporate clientele but it has not been reflected in orders of new cars yet. Corporations plan their purchases of new cars in advance and do not order them on the basis of current offers on the market.

TSS: What developments does your company expect by the end of the year?

The end of 2009 will remain difficult but we think that we have already overcome the worst. During the next four months the market will report some additional registrations linked with the scrapping bonus scheme, but we still expect sales will decline by 20 percent. Citroën has an ambition to increase its market share even within this unfavourable context.

The car-scrapping bonus has fulfilled its main objective and we see that the sale of new cars is moving ahead even though the number of customers using this bonus has been constantly decreasing. Thus, we expect that in the coming months the sales situation will remain stable. Of course, this will happen only if the economic situation in Slovakia and in the world does not worsen significantly.

We expect a drop in sales to private individuals and a revival in purchases from corporate clientele when compared with the beginning of 2009.

TSS: What novelties has your company prepared for either the cars themselves or to support car sales?

First, Citroën is celebrating the 90th anniversary of its brand and the celebration started on September 1 with very good offers never seen before.

Citroën will introduce two new products at a world premiere during the Frankfurt car show. The first will be the new Citroën C3 – Visiondrive – with the aim to become the bestseller of the Citroën brand. When designing this car we have taken the best from the C3 and taken it even further. This new C3 is unique due to the excellent driving experience it offers and its panoramic front glass.

The second new car, the DS3, will be the first from the DS product line. Both these cars will be launched in the Slovak market in the near future.

Within a few days Škoda will introduce a new model, the Škoda Yetti, in Slovakia which we hope Slovaks will see as attractive in its design and performance, as well as its price. We have also prepared new price offers for the Octavia Family and Octavia Business models. Many our customers will certainly also appreciate our Premium lifelong guarantee, which guarantees free assistance to customers even in situations they cause themselves, like running out of fuel, a tyre defect and the like.

By the end of the year we will launch some interesting models and limited editions of the Laguna Black Edition, the Koleos Exception, and the Twingo Rip Curl in Slovakia. Regarding support for car sales, we have prepared very sound terms for corporate clientele.