Leonard Cohen: I didn't come to fool you

“I'VE TOLD the truth, I didn't come to Bratislava to fool you,” he said, in the melancholic voice that has found its way into the hearts of even those Slovaks who were unable to fully taste all the shades of his sublime poetry. 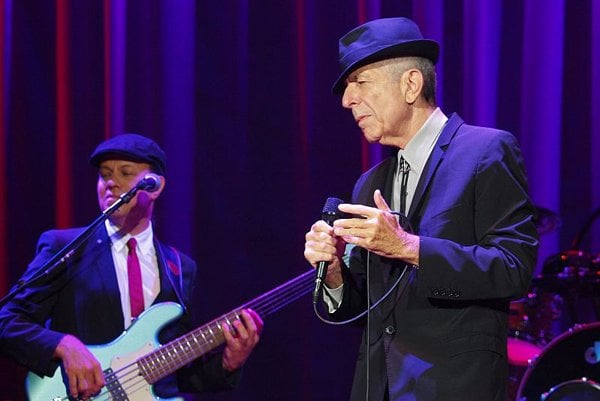 “I'VE TOLD the truth, I didn't come to Bratislava to fool you,” he said, in the melancholic voice that has found its way into the hearts of even those Slovaks who were unable to fully taste all the shades of his sublime poetry.

Leonard Cohen walked on to the Bratislava stage with the modesty of the wise and dignity of a poet and told his audience that since he does not know when he and his Unified Heart Company would next come to town, they would give everything they had.

And so he did on August 28: Take This Waltz, Famous Blue Raincoat, So Long Marianne, If It Be Your Will, Suzanne, Hallelujah, Dance Me to the End of Love, First We Take Manhattan, In My Secret Life, The Future, The Tower of Song – to name but a few of the Cohenian gifts.

The 75-year old Canadian poet, singer and songwriter started his concert right on time, in a gentlemanly gesture which surprised those who arrived late, fooled by the assumption that mega-stars make the audience wait for their blessings. Not Leonard Cohen, who has it all: the grace and diligence of a man who is prepared to spend long weeks on a line of poetry until he can feel the pulse of the verse and is sure others will feel it too.

Bratislava’s Incheba Arena received a more decorous and elegant outfit than it would get for a run-of-the-mill concert. And it received Cohen, who sang most of his songs with his eyes closed and often went down on his knees, as though constantly paying respect to all the muses who have inspired him during his lifetime.

Perhaps because of that blend of intense fragility and strength, there was something personal in the way he connected with the public, something that opened for him the hearts of everyone who came that night to hear him. Many regarded the concert as perhaps the last chance to see Leonard Cohen performing, but when he took his guitar and played his music, such thoughts suddenly appeared indecent. Instead, one thought: may he just go on forever.