A milestone in Slovak history is re-enacted in Banská Bystrica

DURING World War II – on August 29, 1944 – a milestone in Slovak history began. It was the start of the Slovak National Uprising against fascism and the Slovak puppet state and it was centred in central Slovakia around the city of Banská Bystrica. On the last weekend of August, an authentic re-enactment of the mobilisation was staged there by clubs of military history. 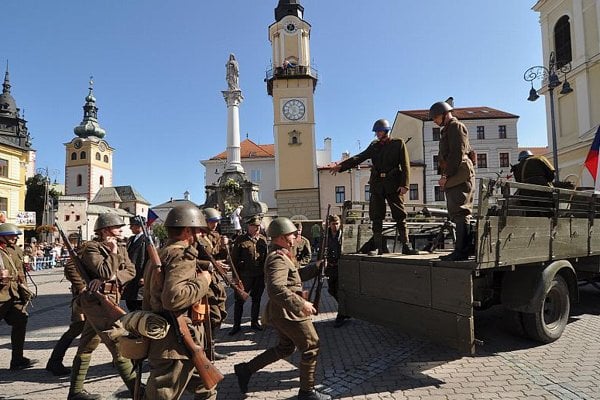 The recruitment of soldiers for the Slovak National Uprising is re-enacted in Banská Bystrica. (Source: TASR)
Font size:A-|A+  Comments disabled

DURING World War II – on August 29, 1944 – a milestone in Slovak history began. It was the start of the Slovak National Uprising against fascism and the Slovak puppet state and it was centred in central Slovakia around the city of Banská Bystrica. On the last weekend of August, an authentic re-enactment of the mobilisation was staged there by clubs of military history.

Ján Kupec – who played the role of the head of the Revolutionary National Committee – said 100 youths from Banská Bystrica were recruited to take part as soldiers in the Uprising. “My task was to coordinate, along with members of the military administration, the whole mobilisation and enlistment during the deployment of the rebel army at the front,” said Kupec from the Military History Club known as Golian. Modern civilians came, too, to say farewell to the soldiers and rebels. “We are the ones who came to watch our boys depart for fighting,” said Vlasta Gagová. She added that historical documents were studied because “we wanted to show as much as possible of that period”.

The modern-day recruits were photographed by an artist-photographer carrying a period camera from 1906. “I documented the Slovak army soldiers leaving for the Uprising,” said Pavel Kraus from the Military History Club from the Czech town of Zlín. He added that his grandfather had made photographs of the Czechoslovak president, Tomáš Garrique Masaryk, with that very same camera but that he used it just as a prop during the re-enactment.

Several hundred spectators came to SNP Square in Banská Bystrica to watch the re-enactment. “It is hard to fully describe my feelings, as I did not live then; but I find it interesting and quite authentic,” Peter Tóth of Banská Bystrica told the TASR newswire. “It is probably the only uprising in Slovak history that hit the target,” he said. “I could not imagine being recruited to fight in the Uprising, but the times are different, and maybe the feelings now, in peace and freedom, are different, too,” Tóth concluded.

Another onlooker, Anton Ondrejka of Banská Bystrica, said he is convinced that the Uprising was terrifying, but its scope is distorted today by current films in which a person’s life means nothing. “It is important to enliven historical events like the Uprising, but it seems to me that people nowadays are not very much impressed, as they do not know what they would do in such a situation, when their lives and families and existence would be threatened,” Ondrejka opined.

The SNP celebrations continued in Banská Bystrica with the performance of a brass orchestra from the Frontier Guard of Belarus. After the mobilisation the soldiers departed for the amphitheatre in Vydrov where presentations about various battles in the Uprising were shown. Later in Banská Bystrica several artists performed, including the Wings of Dixie and Sisa Sklovská with the Alexander Daško Band. Visitors to the events in Hronec were also able to see the armoured train named Štefánik as well as a steam locomotive.