THE ATTENTION of two nations turned to the small Hungarian town of Szécsény on September 10. The town was the venue for a long-awaited meeting between Slovak Prime Minister Robert Fico and Hungarian Prime Minister Gordon Bajnai. As the date approached, the premiers’ were expected to demonstrate their willingness to maintain friendly relations between the two countries, physically divided by the Danube but carrying a heavy burden of mutual slights and historical grievances which continue to keep them worlds apart. 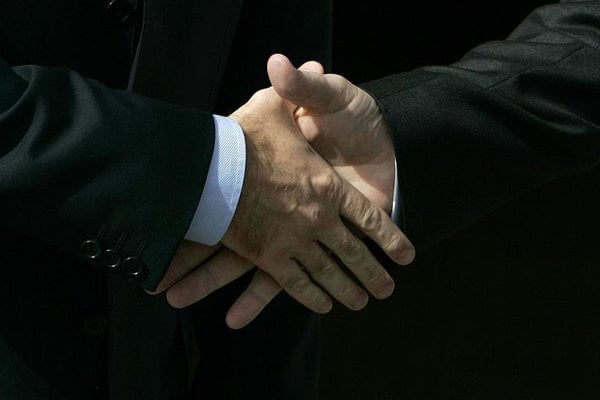 THE ATTENTION of two nations turned to the small Hungarian town of Szécsény on September 10. The town was the venue for a long-awaited meeting between Slovak Prime Minister Robert Fico and Hungarian Prime Minister Gordon Bajnai. As the date approached, the premiers’ were expected to demonstrate their willingness to maintain friendly relations between the two countries, physically divided by the Danube but carrying a heavy burden of mutual slights and historical grievances which continue to keep them worlds apart.

The meeting, which according to Fico was held in a friendly and constructive atmosphere, seemed to fulfil this aim – at least partially. As a result of their meeting the prime ministers signed a joint declaration. In regard to Slovakia’s State Language Act, Fico and Bajnai declared that they would both respect the recommendations of Knut Vollebaek, the high commissioner on national minorities for the Organization for Security and Co-operation in Europe (OSCE). Fico said he guarantees that the law will not change the conditions under which the members of the Hungarian minority in Slovakia use their language.

The prime ministers did not agree on how to interpret Slovakia’s denial of entry to Hungary’s President László Sólyom on August 21. They said experts from both countries will meet and agree on common norms for such visits, the SITA newswire reported. The governments said they also want to establish a joint police committee to fight extremism, xenophobia, racism and nationalism in both countries.

Also, a council for Slovak-Hungarian relations should be established as an apolitical body to help solve bilateral issues. The prime ministers even declared their intention to organise a joint session of the two governments.

“The significance of this meeting is that it will help to calm some emotions,” Fico told a press conference after the meeting. However, he also pointed out a sensitive point in current relations: the fact that deputies from Slovakia’s Hungarian Coalition Party (SMK) will take part in a session of the Forum of Hungarian Deputies of the Carpathian Basin, a body which according to Fico “institutionalises the relation between the Hungarian Republic and Slovak citizens”. He asked Bajnai to help him solve this “neuralgic point” in bilateral relations.

The Hungarian side initiated the meeting after tension in the countries’ bilateral relations had escalated to the point where the Hungarian president was denied entry to Slovakia in August on a private visit (he had been invited to unveil a statue of St Stephen in Komárno), and extremists – especially on the Hungarian side of the border – repeatedly demonstrated against Slovakia’s State Language Act.

Foreign Affairs Ministers Miroslav Lajčák and Péter Balázs, of Slovakia and Hungary respectively, met on August 30 in the Slovenian town of Bled and agreed that their prime ministers would meet on September 10.

“Hungary plays an open game,” Bajnai wrote, adding that his country has no hidden agenda or territorial claims towards any of its neighbours.

Bajnai continued by complaining about what he called the populist nationalism which is harming Slovak-Hungarian relations.

“Slovakia is our ally, our friend, but there is an extreme force inside its ruling coalition whose philosophy resembles the ideas and relics of the 19th and 20th centuries,” Bajnai wrote, referring to the Slovak National Party (SNS), adding that “unfortunately it carries along with it also part of the political elite”.

As for the amended State Language Act, which has recently become the main bone of contention between the two countries, Bajnai adhered to Hungary’s official line and proposed that Slovakia “return the controversial language law back to the level of European norms”.

Apart from these two reservations, he claimed Hungary is ready to build highways and bridges with Slovakia, publish a joint history book and fight the growing hate against Roma.

Sme said that it had also invited Fico to write an op-ed prior to his meeting with Bajnai but he had refused. The head of the Slovak cabinet’s press department, Braňo Ondruš, told The Slovak Spectator in early September that it was too early to answer questions about the details of the prime ministers’ meeting.

High-level meetings of Slovak and Hungarian representatives have been remarkably rare in the past couple of years. Bilateral relations between Slovakia and Hungary have been complicated and tense since the summer of 2006, when the nationalist SNS party became part of the ruling coalition.

The last meeting of the countries’ prime ministers took place on November 15, 2008, in Komárno, a town on the Danube River border between the countries, when Robert Fico met Ferenc Gyurcsány, who was then the Hungarian premier. One of the main issues addressed was the Slovak police response to disorder at a football match in the Slovak town of Dunajská Streda on November 1, 2008, during which several people were injured, including citizens of Hungary. Both prime ministers condemned nationalism and extremism in all its forms, but failed to agree on a mutual plan for combating it. Afterwards, they signed a joint declaration stating their commitment to toughening laws to punish extremism.

Fico’s official meeting with Hungary’s new prime minister, who replaced Gyurcsány in April this year, had been planned for some time. Slovakia’s foreign minister, Miroslav Lajčák, declared when he took up his post in January 2009 that the prime ministers should meet in the first six months of the year. Fico was due to visit Budapest following an April 27 meeting between Lajčák and his Hungarian counterpart Péter Balázs in Luxemburg. However, Slovakia’s passing of the amendment to the State Language Act in June 2009 put a temporary end to preparations for the meeting, which was originally slated for the beginning of July.

Bajnai said at the time that the amended language act contradicted the spirit of the bilateral agreement between Slovakia and Hungary, as well as other international agreements.

The Hungarian side went on to state that it made no sense to meet in such an atmosphere and Lajčák responded the Slovak side would not insist on the meeting if Hungary was not ready for it. The language act remains a sore point on the Slovak-Hungarian bilateral agenda and has continued to mobilise mainstream politicians as well as extremists on both sides of the Danube. It was expected to be one of the crucial points of discussion at the Fico-Bajnai meeting.