THE 14th DALAI LAMA, the spiritual leader of Tibet, visited Bratislava to receive a human rights award on September 9. Slovakia’s highest state officials did not greet him in person, in deference to the country’s relations with China. However, the Dalai Lama held a meeting with the Slovak public in Bratislava and also met the leaders of the opposition parties. 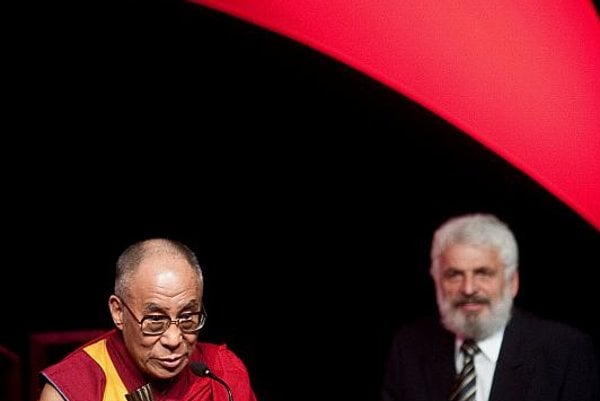 THE 14th DALAI LAMA, the spiritual leader of Tibet, visited Bratislava to receive a human rights award on September 9. Slovakia’s highest state officials did not greet him in person, in deference to the country’s relations with China. However, the Dalai Lama held a meeting with the Slovak public in Bratislava and also met the leaders of the opposition parties.

During his visit, Tibet’s spiritual leader was awarded the international Ján Langoš Award. The national version of the award was granted to the Slovak former dissident Fedor Gál, one of the leaders of the November 1989 movement which overthrew communism in Czechoslovakia. The Ján Langoš Award is granted annually by the Ján Langoš Foundation to one local and one international personality for having the courage to defend human rights, the rights of minorities and democratic values in the society.

“Ján Langoš was an important personality in the fight for freedom, truth and democracy and the Dalai Lama represents and lives all these values,” Natália Bokníková, the press officer of the foundation told The Slovak Spectator. “He also met Ján Langoš in person during his first visit to Slovakia in 2000 and this connection is very strong.”

According to Bokníková, the Dalai Lama accepted the invitation to Slovakia also thanks to former Czech president Václav Havel, a member of the Nomination Committee of the Ján Langoš Award, who is a personal friend of the Dalai Lama and was also a friend of Ján Langoš.

“The Dalai Lama’s visit to Slovakia is an appreciation and motivation for people who fight to see human rights respected and to defend minorities,” Bokníková said. “The Dalai Lama is a laureate of the Nobel Prize for Peace and we see his visit in Slovakia as healing for Slovak society.”

The Dalai Lama, who has devoted his life to the fight for human rights in Tibet and for the autonomy of his country, said when he received the award that he believes Tibet will be free one day.

“There are ever fewer authoritarian regimes worldwide,” the SITA newswire quoted him as saying. “The overall trend is one of strengthening democracy, and this applies to China, where they currently have a communist party without communist ideology and socialism that in fact is capitalism as well.”

He saw hope in the fact that Chinese intellectuals criticise the regime and support a free Tibet, and that more and more young people are studying abroad, thus helping to open their eyes, SITA reported.

The Dalai Lama showed a similar degree of optimism at an afternoon public meeting, where 4,000 people met to greet him and listen to his lecture on the topic of compassion.

According to the Dalai Lama, compassion is not pity, as it is often understood in western culture. While pity implies a certain feeling of dominance, compassion is about opening one’s mind to understand the feelings and pain of others.

“The feeling of compassion helps us to shift the focus from ourselves to others,” the Dalai Lama said in his lecture.

He said that he believed some of the world’s problems come precisely from a lack of compassion in human behaviour.

“Why is it that nobody wants to cause problems consciously yet there are still too many problems in the world?” he asked, suggesting that if people used compassion to see part of themselves in others, they would know how to act without causing pain.

He added that in today’s globalised and inter-connected world people need compassion even more, because the well-being of an individual is completely dependent on the prosperity of the whole and therefore focusing solely on the individual is no longer wise.

“The 20th century was the century of bloodshed, but this, the 21st century, should be the century of dialogue,” the Dalai Lama said, adding that the way forward lay in respecting other people’s views and pains.

Negative emotions help people to achieve their short-term aims, but they can be very harmful in the long run; it is foolish to think in short-term ways, and people should always focus on the long-term goals, the Dalai Lama told the crowd.

Organisers from the foundation invited the leaders of all the political parties represented in the Slovak parliament to the awards ceremony. But only opposition party leaders attended the meeting.

Vice Prime-Minister for Minorities and Human Rights Dušan Čaplovič said that by not attending the awards ceremony cabinet representatives were not distancing themselves from the Dalai Lama. Čaplovič himself told the Foundation that he did not have time to attend.

“Just like the previous government this government also recognises the power of One China, and the government of the People’s Republic of China is our partner now, just as in the past,” Čaplovič told SITA.

Despite ministers’ reluctance to meet the Tibetan spiritual leader, the Interior Ministry provided guards for the Dalai Lama from the Office for the Protection of Officials.