SKYEUROPE is no longer flying but Slovakia’s former low-cost airline is still making business headlines. The collapse of SkyEurope has impacted many more people than the passengers who waited in vain to board their grounded flights or who bought more than 280,000 tickets that they will never be able to use with the airline. 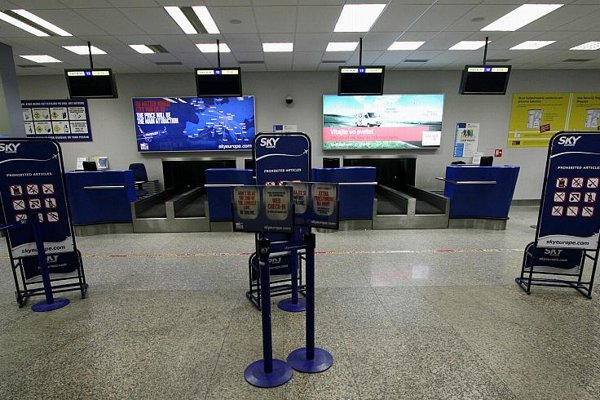 SKYEUROPE is no longer flying but Slovakia’s former low-cost airline is still making business headlines. The collapse of SkyEurope has impacted many more people than the passengers who waited in vain to board their grounded flights or who bought more than 280,000 tickets that they will never be able to use with the airline.

SkyEurope has now been stripped of its operating licence and its 80 pilots have neither jobs nor planes to fly. Meanwhile, prosecutors in both Austria and Slovakia are examining how the company handled its affairs in the recent past.

SkyEurope’s customers are looking for ways to either recover what they paid to the carrier before it collapsed into bankruptcy or to seek some comfort in the offers being made by other low-cost airlines. Several airlines are now hoping to lure SkyEurope ticket-holders by offering them alternative, reduced-fee flights that can be used in combination with their unused SkyEurope tickets.

After seven years on the market, SkyEurope entered bankruptcy shortly before midnight on August 31 and immediately suspended its sales and flight operations. In June, a Bratislava District Court had granted SkyEurope Airlines temporary protection from its creditors while the airline attempted to restructure its operations and finances.

But later SkyEurope’s restructuring trustee, Jozef Griščik, submitted a bankruptcy proposal to the Bratislava District Court, which began bankruptcy proceedings relating to the property of SkyEurope Airlines on September 4.

The court also called on creditors to submit claims within 45 days of the bankruptcy announcement. The court appointed Emil Červenka as bankruptcy trustee.

The task of the bankruptcy trustee is to liquidate the assets of the company and to at least partially satisfy its creditors from the proceeds of the sale of all its assets, said Bartošík.


“Taking into account the fact that SkyEurope has ceased operating, it is very unlikely that its operations will be restarted,” Bartošík added.

Slovakia’s Economy Ministry revoked the airline’s operating licence on September 2 as a consequence of the bankruptcy filing. Responding to speculation about whether the Transport Ministry should have stepped in sooner, Transport Minister Ľubomír Vážny said that the airline had been meeting all the operational regulations concerning safety, according to the SITA newswire.


The ministry had extended the licence earlier this year until February of 2010.

Before entering bankruptcy, SkyEurope had sold about 280,000 tickets for flights after September 1, when the airline was grounded for good.

Some observers have asked whether the restructuring trustee could have prevented the sale of these tickets for future flights when the airline’s financial problems were on the horizon.

Griščik said that as the restructuring trustee he could not have stopped the sale of tickets in any way, other than by submitting the proposal for the declaration of bankruptcy to the court.

“It was submitted immediately after I judged that due to the lack of working capital the success of the restructuring process could not be expected,” Griščik told SITA. “However, within regular operations it is normal for such a company to sell tickets in advance, before the flights take place.”

According to Griščik, the airline’s restructuring could have been possible but the company had not managed to secure enough funds to keep its operations running.

Slovakia’s General Prosecutor’s Office has already received a criminal complaint against SkyEurope for suspicion of bankruptcy fraud, the newswire TASR reported. The complaint was submitted by law firm Bizoň & Partners, which is among the airline’s creditors, over what it called suspicious transfers of customers' funds to an Italian bank.

Reports appeared in the Austrian paper Kurier earlier in September that prosecutors in Vienna are investigating what the paper called accounting problems.

Bartošík, who is a partner in another law firm, B & S Legal, said he is in general somewhat pessimistic about the likelihood of recovering substantial parts of the debts owed by SkyEurope, but he is nevertheless advising his clients to submit claims.

“As lawyers too are not immune to cancelled flights, I will also be submitting my own claims against SkyEurope,” said Bartošík.

As for the likelihood that SkyEurope customers will be able to recover payments they made for flights that will never take off, Bartošík said that will be determined by two factors: the sum of the total claims submitted by all unsecured creditors; and the outcome of the liquidation and sale of SkyEurope’s remaining assets, i.e. how much money the bankruptcy trustee receives from selling the assets of SkyEurope.

“As both factors are uncertain at this point in time, it is impossible to anticipate the potential for satisfaction of the unsecured creditors of SkyEurope, including those who bought tickets for future flights,” he added.

Another important factor is whether the assets of SkyEurope are pledged or otherwise used as security for its debts, according to Bartošík.

SkyEurope’s CEO Nick Manoudakis, in an interview with the Sme daily, said he still believes the airline could have prospered since there had been several potential investors. He also said that at the moment SkyEurope does not plan to establish any new airline. He confirmed that about 500 employees of the airline would be laid off while the core of the company would work on its liquidation.

Earlier this month there was speculation about the potential revival of the airline. Lawyers suggest that such a process could be quite complicated.