THERE are not very many languages that have a special word for a lady who has to undergo seven bouts of grieving. Slovak does – “sedembolestná”. The Virgin Mary of the Seven Sorrows is Slovakia’s official patron, and on September 15 the entire country gets a day off to commemorate her. 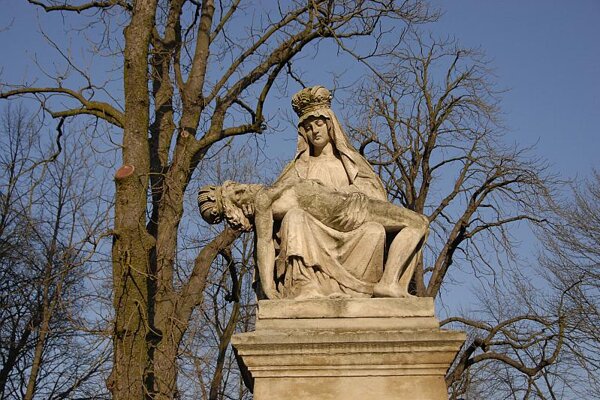 THERE are not very many languages that have a special word for a lady who has to undergo seven bouts of grieving. Slovak does – “sedembolestná”. The Virgin Mary of the Seven Sorrows is Slovakia’s official patron, and on September 15 the entire country gets a day off to commemorate her.

This is by no means the only officially celebrated religious event – out of the fifteen state holidays, as many as nine are connected to the Catholic faith.

Besides Mary there is a holiday devoted to Saints Cyril and Methodius, Epiphany, Good Friday, Easter, All Saints, and three days at Christmas. So when the Slovaks met the Czechs in the 2010 Football World Cup qualifiers on September 5, you can bet that more people were praying for the Slovak team to win.

The last census in both countries showed that only 13 percent of Slovaks were without any faith, and nearly seven in ten were Catholics. In contrast, as many as 60 percent of Czechs are atheists, and Roman Catholics make-up a quarter of the population.

The Czechs have no special day to celebrate an official patron and of their twelve official holidays, only half have to do with religion. The two countries have much in common – this week saw the launch of the first ever international Pop Idol competition, produced jointly by the Czech TV station Nova and the Slovak TV station Markíza.

Czech president Václav Klaus, and former prime minister Jiří Paroubek both have Slovak wives. There is a Slovak sitting in the Czech government. And many Slovaks will tell you they have read more books in Czech than in their own language, into which many works don’t get translated at all due to the small size of the local market.

But if there is one aspect in which the two societies differ markedly, it is in their religiosity. It shows up nicely in the political arena – out of the three main opposition parties sitting in the Bratislava parliament, two have Christianity in their names – the Christian-Democratic Movement (KDH), and the Slovak Democratic and Christian Union (SDKÚ). The third, the Hungarian Coalition Party, was created as a union of three smaller ethnic parties, of which by far the largest was the Hungarian Christian-Democratic Party. The coalition Slovak National Party (SNS) in reality has few obvious principles, but it claims to be based on three main pillars – national, social, and Christian. Coincidently, the Movement for a Democratic Slovakia (HZDS) says exactly the same thing. That leaves Smer as the only political party which is not explicitly Christian. However, even Smer is very careful not to alienate the church.

The situation is very different in the Czech Republic. Of the five parties represented in parliament, the Christian and Democratic Union–Czechoslovak People’s Party (KDU-ČSL) is the only openly Christian one. The Greens, the Communists, the Social Democrats and the Civic Democrats have no religious agenda. And last week’s opinion polls showed for the first time that the KDU-ČSL may well drop out of parliament after the next elections.

When the Dalai Lama received the Ján Langoš Award in Bratislava on Wednesday, he was congratulated by former Czech president Václav Havel, who recorded a special message for the occasion. The moment was deeply symbolic – a spiritual leader receiving a prize named after a Slovak believer, being congratulated by a Czech doubter. Whether it’s singing, sport, politics or ideology, the Czechs and Slovaks always made an interesting match. That’s why our relations are nearly free of sorrows.