AFTER 371 years, the Slovak capital relived the coronation of a new queen of Greater Hungary. On February 14, 1638, the wife of King Ferdinand III, Maria Anna Habsburg was crowned in the St. Martin’s Cathedral in Bratislava (then known as Pressburg or Pozsony). 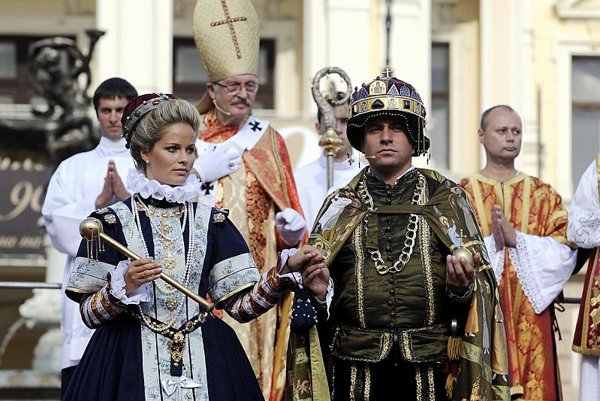 AFTER 371 years, the Slovak capital relived the coronation of a new queen of Greater Hungary. On February 14, 1638, the wife of King Ferdinand III, Maria Anna Habsburg was crowned in the St. Martin’s Cathedral in Bratislava (then known as Pressburg or Pozsony).

On the first weekend in September, Bratislava commemorated the medieval atmosphere connected with this special occasion. Three days of celebration included a traditional folk market on Hviezdoslavovo Square, a competition to find coronation treasure, medieval crafts, historical music and dancing, a knights’ tournament, Hungarian delicacies, and culminated on Sunday with a court procession from St. Martin’s Cathedral to Hviezdoslavovo Square, where the coronation took place. In previous years the ceremony was re-enacted in its original place, but audience numbers were limited by the capacity of the site.

The queen was played by Ivana Surovcová, a dancer well known in Slovakia from her appearance in the TV show Let’s Dance, and the king by opera singer Filip Túma. The queen-to-be was first dressed in a plain white robe, which symbolised the change of her state; she laid on the ground, while others kneeled to show submission. The Archbishop of Kalocsa, played by František Kovár, anointed the queen’s right hand, wrist, right shoulder and shoulder blade with holy oil. After having changed into a ceremonial robe, Maria Anna was crowned.

Bratislava’s mayor, Andrej Ďurkovský, told the TASR newswire that the capital would like to become the main organiser of the event next year. Slovakia’s EU commissioner, Ján Figeľ, said it is crucial to develop such traditions as they connect the past with the future and enhance consciousness about history and culture that unites the whole central-European region.

Maria Anna Habsburg was the daughter of Spain’s King Philip III, and married Emperor Ferdinand III (who was crowned King of Hungary in Sopron in 1625) in December 1629, after their engagement in 1626. By the time of her coronation, he was 32. She and her husband had a harmonious marriage and six children; she died on May 13, 1646, from poisoning, while pregnant. Doctors tried to operate to save her child, but both died and were buried in Vienna.

The Coronation Festivities event started in 2003, when actor Matej Landl played King Maximilian II, the SITA newswire wrote. The following year, Anna Šišková was crowned Maria of Spain, in 2005 Rudolf II, impersonated by Ady Hajdu, in 2006, Martin Nikodým as Matthew II, and in 2007, Zuzana Fialová as his wife Anna of Tyrol. Last year, Maroš Kramár was crowned as Ferdinand II. Between 1563 and 1830, ten kings and nine queens were crowned in St. Martin’s Cathedral. By the time Maria Anna became queen, the Thirty Years’ War was raging. A large part of Greater Hungary was occupied by the Ottoman Empire. The royal court had decamped to Bratislava from Buda following Hungary’s defeat by Ottoman forces at the Battle of Mohács in 1526.