A JOINT issue of two postage stamps by Austria and Slovakia is to connect Carnuntum and Gerulata, two significant Roman settlements which lie on either side of the two countries’ shared border. 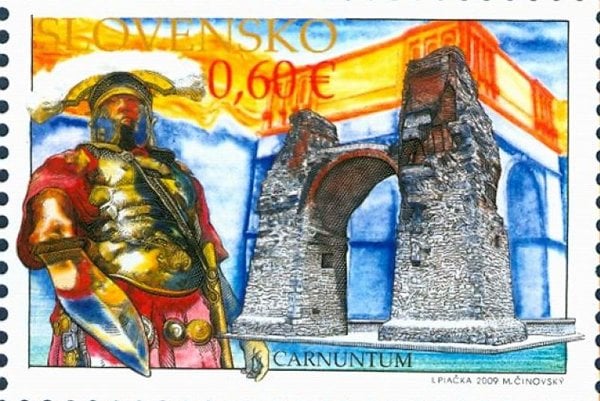 A JOINT issue of two postage stamps by Austria and Slovakia is to connect Carnuntum and Gerulata, two significant Roman settlements which lie on either side of the two countries’ shared border.


The stamps, part of a series of joint issues, are entitled Limes Romanus - Gerulata and Carnuntum, and were officially launched by Slovak Post and the Museum of the City of Bratislava on September 12 at the Gerulata site in the Bratislava district of Rusovce. Their designer is Igor Piačka, and the steel engraving for them was made by Martin Činovský.

Slovak Post said 55,000 copies of the stamps are being printed; their face value is €0.60. Slovak Post also set up a special post box and hand-stamp for the launch of the stamps.

During Roman times, the Limes Romanus was a system of military fortresses across Europe. Part of the system made use of the River Danube to protect Roman provinces from attack by Germanic tribes.

The most prominent fortress in the Pannonia province was Carnuntum, whose site is close to the present-day Austrian village of Petronell.

A Roman encampment was established there as early as 6 A.D. and later promoted to a town. Its most famous Roman monument is the so-called “Pagan Gate”, Heidentor in German, that was built outside the town in the 4th century AD.

The closest Roman camp to the east of Carnuntum was Gerulata, uncovered in the Bratislava district of Rusovce. A fortified castel (i.e. a military camp) was erected here in the 1st century AD, which became the base for a mounted unit.

Currently, there are museums in both places (the Austrian one in the nearby Bad Deutsch-Altenburg) offering events, attractions for children and for groups of visitors.