Spreading the word through Slovak Studies

THE PRESERVATION of the language and culture of a nation abroad would be very difficult, if not impossible, without the efforts made in the area of education. It is for this reason that Centres of Slovak language and culture are significant players in the preservation of connections of Slovaks abroad to their native country, to promote the Slovak culture among the local population and to develop Slovak scholarships outside the country. 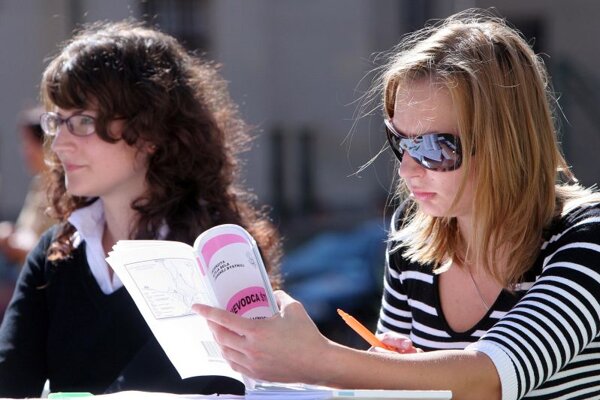 >Slovak can be cool: it is even considered an 'exotic' subject by some US and Canadian students. (Source: SITA)
Font size:A-|A+

THE PRESERVATION of the language and culture of a nation abroad would be very difficult, if not impossible, without the efforts made in the area of education. It is for this reason that Centres of Slovak language and culture are significant players in the preservation of connections of Slovaks abroad to their native country, to promote the Slovak culture among the local population and to develop Slovak scholarships outside the country.

Scholars focusing their research on Slovakia are members of the Slovak Studies Association (SSA). This is a non-profit organisation registered in Pennsylvania, currently headed by Kevin Deegan Krause, associate professor at the Department of Political Science of Wayne State University, who spent some time as a Fulbright scholar at Comenius University in Bratislava.

“The main idea is that we are a community of scholars (and those who appreciate academia) who exchange experiences and expertise in many fields,” Deegan Krause told The Slovak Spectator.

The members of the SSA, who currently number around 100 and are mainly from North America, meet annually. However, Deegan Krause expects to see an increase in membership and activities within the association in the near future.

One of the most eminent centres of Slovak academia is the University of Pittsburgh, the only university in the US where students can opt for a minor in Slovak Studies. The Slovak Studies Programme is lead by Martin Votruba.

The Slavic Department at the University of Pittsburgh has offered Slovak classes since the late 1960s but the university was unable to finance the teaching staff of such a minor language on a permanent basis. Professor Oscar Swan, the head of the department in the 1980s, turned to fraternal organisations of several groups of Slavic immigrants hoping to secure sufficient funds to support their languages.

“A small group of Slovak organisations came together and, over a period of about 15 years, donated enough money to set up a permanent endowment at the university,” Votruba told The Slovak Spectator. “No more donations were needed since then as it is self-maintaining, so to say. The University of Pittsburgh has invested the money, reinvests part of the income and uses another part of what the endowment earns as well as its own funds to support the only permanent Slovak Studies Programme at an American university.”

Culture courses in Slovak film, immigration, history and literature attract some 20 students each year, while around 10 usually enrol in Elementary Slovak classes.

“Up to half of the language students have an ancestor or two who emigrated from Slovakia, sometimes a hundred or more years ago,” Votruba said. “This is not surprising, as Pittsburgh and south-west Pennsylvania have the highest percentage of Slovak-Americans of all the US states.”

Students register for the language courses in order to meet their foreign language requirement. They often base their decision on the reputation of the course, or because they want to focus on Slovakia or central Europe in fields such as political science, history, anthropology and government studies. The culture courses attract students who focus on its main subjects, film or history.

Votruba is appreciative of the grants offered by the Slovak Ministry of Education which enable a few of his students to attend a brief summer language course in Slovakia each year.

The Slovak studies programme has also been offered at John Carroll University since spring 1982. It began with a culture and civilization course on Czechoslovakia. These courses focused on the country itself and on Slovaks in American history, culture, and society .

Formal Slovak language study was first offered in autumn 1983, with the arrival of the first Fulbright Visiting Lecturer of Slovak Language and Culture from Slovakia. Six language courses were then taught at the Slovak faculty over the next 12 years (for academic credit) during the day and once a week in the evenings. Free courses were also offered for the Greater Cleveland Area.

Since the conclusion of the Fulbright programme, Slovak language has continued to be offered as part of the Slavic languages course of the Department of Classical and Modern Languages and Cultures for which Gerald J. Sabo has been responsible since autumn 1981. He currently has 17 students on the course – some of them of Slovak, Czech, Polish and Croatian origin.

“We have contributed to furthering knowledge of Slovakia and Slovak studies in both the historical and present-day context,” Sabo told The Slovak Spectator.

John Carroll University and the University of Pittsburgh are the only two US universities where students can study Slovak as part of regular courses for university credits. Sabo also stated that his institute used to offer follow-up Slovak courses, for countrymen in particular.

“Cleveland holds a special place in the history of Slovak Americans, and continues to do so,” Sabo said. “In October 1990, on the anniversary of the signing of the Cleveland Treaty, Cleveland and Bratislava became sister cities.”

On April 30, 1999 the John Carroll University opened the Slovak Heritage Room at the Grasselli Library.

In Canada, the only institution focusing on Slovak studies is the Chair in Slovak History & Culture at the University of Ottawa, presently held by M. Mark Stolarik, a specialist on the history of Slovak immigration to North America. It was founded in 1990 with the help of contributions from Slovak communities in the western hemisphere, from resources obtained by Dr. Joseph M. Kirschbaum in the 1980s.

“The mission of the Chair in Slovak History & Culture is to teach students all about Slovakia,” Stolarik told The Slovak Spectator. “I also recruit graduate students to write their dissertations on some aspect of Slovak history, at the moment I have two PhD students doing so.”
The third-year courses focusing on Slovaks and their neighbours before and after 1780 usually attract a full class of 50 students, as well as the class on “The Rise and Fall of Czechoslovakia”. According to Stolarik, the history programme is very popular.

“I suppose students take my courses in Slovak history because it is an exotic subject and they want to learn something about central Europe,” he said, adding that most of the students are non-Slovaks.

Stolarik has also established a Slovak library and archives at the university with several thousand books and periodicals about Slovakia and Slovaks, located within its Morisset Library.

“Even though we have an exchange programme with Comenius University, nothing has been organised,” Stolarik said.