IN MANY towns across central Europe there used to be Calvaries – symbolic Ways of the Cross – on a nearby hill, usually with seven chapels, each representing one stop on Christ’s way to the cross, and at least one church. Calvaries are usually connected with the Jesuit order and are meant to help believers feel how Christ felt during his journey to the site of his execution. 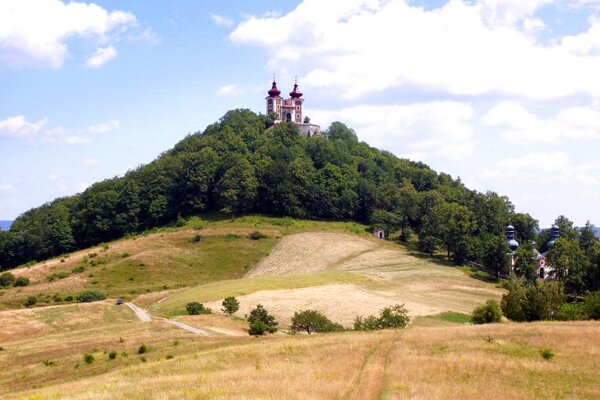 The Calvary in Banská Štiavnica, which is now being restored. (Source: Ján Krošlák, Sme)
Font size:A-|A+0

IN MANY towns across central Europe there used to be Calvaries – symbolic Ways of the Cross – on a nearby hill, usually with seven chapels, each representing one stop on Christ’s way to the cross, and at least one church. Calvaries are usually connected with the Jesuit order and are meant to help believers feel how Christ felt during his journey to the site of his execution.

Banská Štiavnica’s Calvary represents a unique architectural and landscape complex as regards both its extent and content. It is the most outstanding Baroque Calvary complex in Slovakia. The complex itself consists of 25 buildings including three churches, and chapels decorated with valuable paintings. There are also wood and ironwork furnishings and painted wooden reliefs. The chapels and churches are built on the steep slope of a dormant volcano, Ostrý vrch (Sharp Hill). The Calvary’s foundation stone was laid in 1744 with the cooperation of both Catholics and Protestants. The work was overseen by its artistic creator, Jesuit priest František Perger, most probably based on an architectural rendering elaborated by a well-known historian, cartographer and builder, Samuel Mikovíni. The Calvary is one of the oldest such complexes in Slovakia, and since 1993 has been included – together with the town of Banská Štiavnica and its vicinity – on the UNESCO World Heritage List. Since June 2007 it has also been included on the Worlds Monuments List of the 100 most endangered sites, as declared by the World Monument Fund in New York.

Not long ago, the interior of the Lower Church was renovated and restored, and on September 13, the first renovated Chapel, No. 7 – Jesus on the Mount of Olives, was presented to public. The famous Vášáry sisters, Emília (a renowned actress) and Magda (a former actress and later Slovakia’s Ambassador to Austria and Poland, the founder of the Society for Foreign Politics, and a former presidential candidate) who come from Banská Štiavnica, took part in the ceremony.

“As the whole renovation of the Calvary will cost about €3,300,000, we are trying to find the money in any way possible. The Vášáry sisters formally adopted the chapel. The symbolic adoption means that the donor gives about €10,000 for a period of several years, and for this money, the chapel will be restored,” Calvary Fund chair Martin Macharik told the TASR newswire.

Emília Vášáryová praised both the location of the Calvary and its artistic Baroque beauty, while at the same time expressing hope that people will find their way here. The restoration project began in 2007. “As the complex is vast, we did not intend to renovate it in one go and to keep it closed for eight years, but instead decided to restore it gradually,” Macharik added.

He complained that some of the buildings are dilapidated but said that the fund’s representatives accept that the buildings have differing requirements, and added that they want to obtain the restoration money gradually from different grants and resource.