NOVÁCKE Chemické Závody, one of nine chemical companies fined by the European Commission for creating a cartel, has filed for bankruptcy to shield itself from creditors. It is also seeking to annul a fine of almost €20 million levied by the EC. 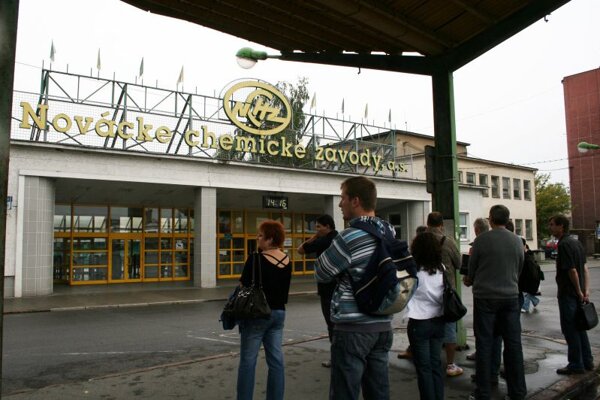 The future of NChZ and its employees is uncertain. (Source: TASR)
Font size:A-|A+  Comments disabled

NOVÁCKE Chemické Závody, one of nine chemical companies fined by the European Commission for creating a cartel, has filed for bankruptcy to shield itself from creditors. It is also seeking to annul a fine of almost €20 million levied by the EC.

In a letter to business partners dated September 17, managers of Novácke Chemické Závody (NChZ) wrote that because of the fine the company would undertake bankruptcy proceedings to protect it from creditors and avert any potential threat to its operational and payment capabilities. They said the aim is to continue the company’s operation.

“The company has also filed an action with the Court of First Instance in Luxembourg for annulment of the decision to impose the fine and asked for suspension of enforcement of the decision,” Miroslav Šuba, the company’s chairman of the board of directors and other board members wrote.

NChZ’s management claims that the amount of the fine is bankrupting in nature and is in contradiction with EU legislation in which fines can be punitive and corrective but never so high as to destroy a company.

“Companies which act in a way that harms competition must bear the consequences,” Jonathan Todd, the spokesperson of EC Commissioner Neelie Kroes said, as cited by the TASR newswire. “This applies also to NChZ. The EC must impose fines for making cartels in order to discourage companies from such undertakings.”

According to Todd, cartels cause an estimated €20 billion a year in economic damages within the EU.

Todd told TASR on September 18 that the Slovak chemical company had not yet contacted the EC with a request for negotiations over possible payment conditions. The deadline to pay the fine is in late October.

Fine for the cartel

The EC press release said the companies in question were: Almamet, Donau Chemie, Ecka Granulate, Holding Slovenské Elektrárne (for its former subsidiary TDR Metalurgia), Novácke Chemické Závody and its former parent 1. garantovaná, SKW Stahl-Metallurgie and its former parent companies Evonik Degussa and Arques industries. Akzo Nobel was also part of the cartel but was not fined because it had revealed its existence to the EC.

The fine for Evonik Degussa was increased by 50 percent because it had previously taken part in similar illegal activity.

“Industrial customers all over Europe suffered as a result of this cartel for several years,” said Competition Commissioner Neelie Kroes in the EC press release. “The commission will not tolerate such economic damage to Europe’s industrial base.”

The commission’s investigation started with surprise inspections in January 2007, prompted by an application for immunity lodged by Akzo Nobel under the 2002 Leniency Notice.

Among the nine companies, NChZ and its former parent, 1. garantovaná received the largest fine of €19.6 million.

NChZ manufactures organic as well as inorganic chemicals for further use in various industries. It currently employs 1,764 people. Last year it reported turnover of almost €230 million and a profit of €363,000. It is owned by a Cyprian company, Disor Holdings Limited, which acquired shares previously owned by financial firms Penta and 1. garantovaná.