Chamber music in a Bratislava factory

THE CHAMBER music scene in Slovakia would not be the same without Convergence, a festival which has now marked its 10th anniversary. The festival has repeatedly proven itself over a decade and its most recent edition shows that it has become a mature event with enthusiastic audiences who are willing to devote four evenings to indulging themselves in the harmonic tones of classical music. 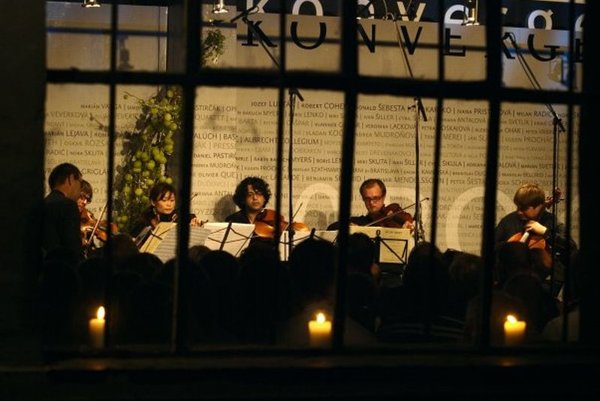 THE CHAMBER music scene in Slovakia would not be the same without Convergence, a festival which has now marked its 10th anniversary. The festival has repeatedly proven itself over a decade and its most recent edition shows that it has become a mature event with enthusiastic audiences who are willing to devote four evenings to indulging themselves in the harmonic tones of classical music.

“For me the last 10 years have been a fascinating story of exploration, creating new space for the joy of music, and seeing the connections of the audiences with the performers,” Jozef Lupták, the artistic director and founder of the festival wrote in the bulletin distributed to concert-goers.

The wall behind the performing musicians was covered with the names of artists who have performed throughout the festival's, including artists such as Robert Cohen, the Opera Aperta ensemble and Baruch Myers, the rabbi of Bratislava.

“There is a story and a friendship behind each of these names,” Lupták told the audience before Friday’s concert, adding that he was impressed by the packed concert hall and by the exuberant interest of the audience in chamber music.

This year, Convergence’s aspiration was not only to connect the Slovak audience with the performers from all around the globe but also to use the festival as an occasion to mark the 20th anniversary of the Velvet Revolution.

“Without this, the Convergence Festival probably wouldn’t exist, although not as many people believe in this change nowadays as they did when they were ringing their keys at the public squares,” Lupták wrote.

The stage of the Design Factory in Bratislava, the traditional venue of the festival, also turned into a theatre stage for one night this year when Melissa Hawkins performed Juliet – Dialogue about Love. This play by Hungarian native András Visky is about a Hungarian woman with seven children imprisoned in a Romanian detention camp.

The other nights, however, from Thursday to Sunday belonged to music. The opening concert on September 17 was a festive event to celebrate Convergence’s 10th birthday and it featured the Czech Virtuosi chamber orchestra along with Jozef Lupták and Robert Cohen, a famed cellist and conductor. The world premiere of the Penetration for Cello and Orchestra by Slovakia-based composer Jevgenij Iršai was also part of the programme as well.

Friday evening started with the Bratislava Chamber Music Night IV, which presented a compendium of central European composers, including Bohuslav Martinů, Gustav Mahler, Leoš Janáček and Bratislava-natives Johann Nepomuk Hummel and Ernö Dohnányi. It was followed by a World Downside Up concert by the J Kyle Gregory Quintet.

Saturday’s programme included a concert by Romaria, an ensemble of musicians with completely different social backgrounds – from the US, the UK, Slovakia and Denmark. Special points during this day’s programme were a musical riddle for children on Saturday afternoon and an evening concert called European Violin Lullabies in the Klarisky Church.

The Allegro Brillante performed on Sunday afternoon was the last concert of chamber music as such. The audience got a slightly different atmosphere at the final concert of the festival – an open-air event with Collegium Musicum, the legendary Slovak grouping founded in 1969 around Marián Varga and revived in 2008 with Marián Varga on keyboards and organ, František Griglák on guitar, bassist Fedor Frešo and a guest drummer Martin Valihora.

The concert began with a performance of Varga’s new piece called Requiem which the musician dedicated to Ján Langoš, one of the leaders of the 1989 revolution in Slovakia. The sad atmosphere of the composition performed by Lupták and his colleagues soon developed into an nostalgic atmosphere of good memories which the well-remembered songs of Collegium Musicum never fail to engender in its faithful fans.

“Each of the concerts had a unique atmosphere and the artists as well as the audience were absolutely great,” Lupták told The Slovak Spectator. “All the concerts were full and our expectations were not only fulfilled but far exceeded.”

The organisational team has already started working on preparations for the 11th edition of Convergence which will, as usual, be based on chamber music and its live performance, which makes the festival unique in Slovakia.

“We’ve already got several great guests from abroad scheduled to come and we are preparing several new projects,” Lupták said.