Slovakia must build on its success

MORE practical training in school curricula, priority to e-government, investment in hiring and retaining highly qualified teachers, and an online procurement system to increase both transparency and efficiency would all be vitamins to help business in Slovakia retain its vigour and refine its operational environment, suggests the Executive Director of AmCham Slovakia, Jake Slegers, in an interview with The Slovak Spectator. Slegers also spoke about prospects for building a knowledge-based society, bridges between the business world and academia and the fate of CSR in times of economic downturn. 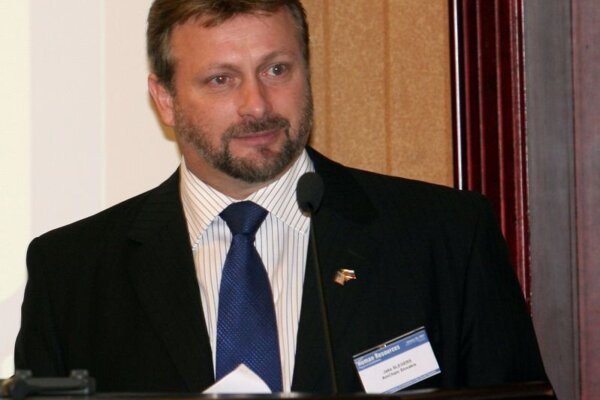 MORE practical training in school curricula, priority to e-government, investment in hiring and retaining highly qualified teachers, and an online procurement system to increase both transparency and efficiency would all be vitamins to help business in Slovakia retain its vigour and refine its operational environment, suggests the Executive Director of AmCham Slovakia, Jake Slegers, in an interview with The Slovak Spectator. Slegers also spoke about prospects for building a knowledge-based society, bridges between the business world and academia and the fate of CSR in times of economic downturn.

The Slovak Spectator (TSS): How do US investors and businesses view the Slovak business environment?

In recent years, Slovakia has frequently been seen as a country with favourable conditions for doing business. Now, with its entry into the eurozone, Slovakia has a unique opportunity to set a course that will build on this success and continue to strengthen its competitiveness. However, as competition intensifies for the limited supply of highly skilled and educated labour, we see the need to review the main deterrents to economic growth in order to secure healthy conditions for doing business in the country and ensure positive and sustainable development of Slovakia’s economy.

For this reason, AmCham conducted a survey of foreign investors in Slovakia which identified current conditions and barriers for foreign investors doing business in Slovakia. The Foreign Investors Survey was conducted by AmCham and Ernst & Young in March-June 2009 and the respondents were more than 100 companies representing foreign investors from 22 different countries doing business in Slovakia. Our survey showed that the global economic crisis has significantly affected foreign investors’ plans for their future investments in Slovakia. According to the survey, 99 percent of respondents have been impacted by the economic downturn. Nevertheless, only 1 percent of respondents are considering moving their operations out of Slovakia and only 8 percent plan to downsize. The fact that a vast majority of foreign companies want to keep their operations at least at current levels is a strong indication that Slovakia remains highly competitive.

TSS: What are the areas in need of further improvement?

According to our Foreign Investors Survey, the two main areas where businesses see the need for further improvement are Slovakia’s labour pool and educational system as well as public administration, including its legal framework, transparency, and administrative burden on businesses. Our key recommendations in the two areas can be summarised as follows: cooperation between the state, universities, research institutes, schools and businesses at all levels of education should be strengthened; investment in hiring and retaining highly qualified teachers and investment in high-quality equipment and facilities at educational institutions should be a priority.

More practical training and education should be included in school curricula while soft skills (service attitude) and leadership and language skills (communication, foreign languages) should be improved. Rapid and non-systematic changes of legislation should be eliminated and various stakeholders should be openly invited and encouraged to take part in the preparation of new legislation. E-government should be intensely prioritised and rules for public tenders and licensing should be more transparent and more in line with EU standards. An online procurement system would significantly increase both transparency and efficiency while anti-corruption efforts should begin with the education of young people. Also, increased focus should be put on education and training of judges in the area of business and commercial law.

TSS: During the spring of 2009, AmCham organised a regional tax conference exploring what would be the right response of tax administrations to the changing economic environment. AmCham also introduced its tax initiative in this area. How has this tax initiative progressed?

Following the 4th Regional Tax Conference, the AmCham Position Paper on the planned Revision of the Income Tax Act was discussed with representatives of the Slovak Ministry of Finance. We also contacted our partners in EU countries and prepared a comparative study on best practices in two of the seven main areas covered by the position paper. We are currently in the process of arranging further meetings with the Ministry of Finance on issues related to the exemption of profit from the sale of shares and tax-ruling procedures. AmCham appreciates the very constructive approach of the Ministry of Finance and we believe that our proposals regarding tax law will have a significant and positive impact on the business environment in Slovakia.

TSS: AmCham has been calling for a more intense approach to building a knowledge-based society in Slovakia while its members have also been active in trying to build bridges between the academia and the business community so that education institutions can better understand and meet the needs of business. What have been the most significant AmCham activities in this area?

Throughout the past two years, AmCham Slovakia has been very active in terms of strengthening cooperation between academia and businesses. Last year, we introduced a very successful Mentor Network Program which provides opportunities for students to network with senior executives of AmCham member companies.

The mentor network has three main objectives: to increase student awareness of successful companies in Slovakia, to encourage students to stay in Slovakia upon graduation, and to send a clear message to universities that they are one of the region’s most valuable assets for economic development. Altogether, 31 mentors (CEOs), 31 students and seven representatives of academia have already taken part in this program. We were also planning to proactively expand business and academic cooperation to AmChams in neighbouring countries. We have already “exported” our know-how regarding the Mentor Network Program to the American Chamber of Commerce in the Czech Republic which is currently planning to start a similar program in Prague. In addition, AmCham, in cooperation with the University of Economics’ Center for North-American Studies, prepared a course on the US Business Environment & Ethics led by our member companies Accenture, Dell, IBM, U.S. Steel Košice, and the Central European Business and Social Initiative. The 13-week course will start on September 24, 2009.

In order to intensify the support of know-how and technology transfer between the United States and Slovakia, AmCham Slovakia, in cooperation with its member companies active in the area of research and technology, organised an official visit by Minister of Education Ján Mikolaj to the United States. This high-level trip took place from March 31 to April 6, 2009, and included a series of visits to top US universities and leading research institutions in conjunction with meetings at the corporate headquarters of Microsoft, Cisco Systems, IBM and Hewlett- Packard, along with educational
institutions in or near Silicon Valley as well as business leaders, educational institutions and government officials in Minnesota.

AmCham Slovakia believes that the official visit has established valuable contacts between Slovak and American education, research and technology institutions and offered great opportunities for all participants to gain a better understanding of common interests and opportunities on both sides of the Atlantic Ocean.

TSS: In response to the global economic downturn companies are making cuts to their budgets hile philanthropy and other activities related to corporate responsibility are often affected. In your opinion which activities should businesses preserve in this area?

JS: AmCham has recently asked its members active in the area of CSR if they are planning to reduce their CSR activities and budgets due to the economic crisis. The response was unanimous.

Although companies had to dramatically cut their costs and increase efficiency in all of their operations, corporate responsibility remains a top priority. In the past few months, our members have focused on volunteer-related community initiatives and extra consideration for key employees. They are also sticking even more strictly to ethical behaviour towards their business partners and clients. All of these areas of CSR have gained even more significance during the economic crisis.