JUDGE Jana Dubovcová has never hid her opinions about the state of the judiciary in Slovakia and its top representative, Štefan Harabin. Earlier this year, she supported a campaign run by a political ethics watchdog seeking to prevent Harabin’s election as Supreme Court President. She did not sign a letter prepared by 15 Slovak judges charging that disciplinary proceedings were being used against some judges as a tool of intimidation only because she thought that the letter was addressed to the wrong people. The judges sent their letter to the president, prime minister and speaker of parliament hoping to find a sympathetic ear. But Dubovcová, a Banská Bystrica district court judge, suggested in an op-ed published in the Sme daily on September 9 that she held these three officials partially responsible for the current condition of Slovakia’s judiciary. 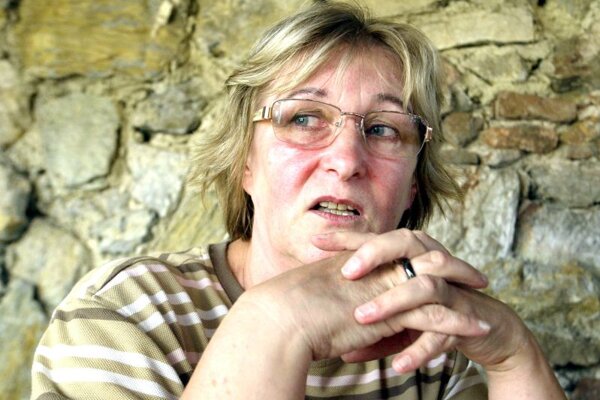 JUDGE Jana Dubovcová has never hid her opinions about the state of the judiciary in Slovakia and its top representative, Štefan Harabin. Earlier this year, she supported a campaign run by a political ethics watchdog seeking to prevent Harabin’s election as Supreme Court President. She did not sign a letter prepared by 15 Slovak judges charging that disciplinary proceedings were being used against some judges as a tool of intimidation only because she thought that the letter was addressed to the wrong people. The judges sent their letter to the president, prime minister and speaker of parliament hoping to find a sympathetic ear. But Dubovcová, a Banská Bystrica district court judge, suggested in an op-ed published in the Sme daily on September 9 that she held these three officials partially responsible for the current condition of Slovakia’s judiciary.

Shortly thereafter, Dubovcová’s boss, Ľubomír Bušík, submitted a proposal for disciplinary action against her and demanded the strictest possible punishment – suspension. Bušík claimed that by expressing her personal opinion, Dubovcová had questioned the work of the Judicial Council. Bušík also criticised Dubovcová for attaching her name to the “Red Light for Harabin” campaign organised by the Fair Play Alliance NGO to oppose Harabin’s election, according to Sme.

Justice Minister Viera Petríková, a nominee of the Movement for a Democratic Slovakia (HZDS), approved Bušík’s proposal on September 27, provoking a wave of criticism from non-governmental organisations, opposition political parties and media. The next day, Bušík withdrew his request for Dubovcová’s suspension and said that the matter had already turned into a political fight. However, Bušík maintained that his original reasons for submitting the disciplinary action against Dubovcová were still valid.

Petríková then accepted Bušík’s modified proposal, changing Dubovcová’s judicial status for a second time within a short period. Opposition parties are now saying that it is Petríková who deserves to be sacked over the whole controversy.

This is only one of many cases that have recently emerged from the turbulent seas of the Slovak judiciary, sending waves of concern among ethics watchdogs, judicial observers and the diplomatic community.

In early September, 15 judges wrote an open letter to Slovakia’s three highest constitutional officials as well as the Justice Minister and the Judicial Council warning about what they called abuse of disciplinary proceedings against certain judges. Among other examples, the letter listed a disciplinary proceeding against Anna Benešová who in an earlier interview with Sme had accused the court’s management of putting pressure on her to give preference to legal complaints filed by Harabin. The letter also noted disciplinary actions against judges Robert Urban, Milan Ružička, Darina Kuchtová and Peter Paluda and also against the honorary chairman of the Association of Judges of Slovakia, Juraj Majchrák, who has faced three disciplinary proceedings in three months.

On October 1, three judges, Miroslav Gavalec of the Supreme Court, Katarína Javorčíkova of the Bratislava Regional Court and Dušan Čimo of the Trnava Regional Court told the media that 105 judges have now signed a document called “Five Sentences”, which charges that judicial authorities are seeking to penalize judges for their opinions, the TASR newswire reported.

On September 28, the Justice Ministry said it considers the case of Judge Dubovcová, who was almost suspended for expressing her personal opinion, wrapped up.

“The ministry has taken steps to ensure that Dubovcová can hear cases,” the spokesman for the Justice Ministry, Michal Jurči, said in a press release.

“At the same time [the ministry] publicly calls on her to submit evidence about her publicized statements that the president of the Banská Bystrica District Court, Ľubomír Bušík, was influenced by politicians,” Jurči said.

The Justice Ministry also wrote in its press release that “friendly relations between Mrs Dubovcová and parliamentary deputy Daniel Lipšic are known. Dubovcová previously worked at the Justice Ministry at a high management position in the Lipšic era. So the question is legitimate: who is being influenced by politicians?” Daniel Lipšic served as justice minister from 2002 to 2006 and is now an opposition MP.

The opposition parties are talking aloud about initiating a no-confidence motion in Justice Minister Petríková for what they call mishandling of the Dubovcová case.

Lucia Žitňanská, former justice minister and deputy for the Slovak Democratic and Christian Union (SDKÚ), said the main argument for the recall of Petríková is her complete bungling of the situation in which the president of the Banská Bystrica District Court requested the suspension of Judge Dubovcová from her position for expressing a personal opinion.

“I think this should not really happen in the 21st century in a democratic society,” Žitňanská told The Slovak Spectator.

“I personally think that this is a case which has disturbed the Slovak public and thus she [Petríková] must take responsibility,” Žitňanská said. “However, I do not have illusions that something would fundamentally change. After all, the position belongs to Mečiar’s HZDS.”

In the midst of the growing public criticism, Prime Minister Robert Fico made a general statement that a situation like recall should not emerge when someone is expressing critical or political opinions, not even at a theoretical level. Fico made no further comments regarding the state of the judiciary.

Emília Sičáková-Beblavá, outgoing president of political ethics watchdog organisation Transparency International was much more outspoken. She said she sees the recent developments in the judiciary as serious problems, “which have been affecting decent people”.

“Fear rules the judiciary and it seems that it has overtaken most of the judges,” Sičáková-Beblavá told The Slovak Spectator.

“Robert Fico's government has seriously failed in this area: it made it possible for Mr Harabin to become the head of the Supreme Court, for him to recall the Judicial Council and then to intervene in the operation of the Special Court as well,” Sičáková-Beblavá said. “He [Harabin] did not restrain from clearing out personnel from the judiciary as well as manipulating the selection of new judges”.

According to Sičáková-Beblavá, if the government wants to halt the existing turmoil, it should immediately recall the justice minister who has not taken any steps to improve the current situation. She suggested that the government nominate someone to the post who has a vision to strengthen the transparency and credibility of the judiciary in Slovakia and who would lead a serious public discussion about this vision while taking concrete steps.

Žitňanská agreed that the status of the judiciary could only be changed following a public discussion about the kinds of measures that should be taken.

“It will be realistic after the elections, perhaps,” Žitňanská told The Slovak Spectator. She has said that she plans to submit several proposals to improve conditions within the judiciary while her party is also considering proposing changes to the constitution.

As for the impact on society, Sičáková-Beblavá said that the decline of trust by society in the judiciary has already produced an evaluation of the government in “unflattering terms”.

“There are signals transmitted to citizens that ‘justice’ can be achieved through knowing particular persons and political parties and this is a very negative phenomenon,” Sičáková-Beblavá said.

According to Sičáková-Beblavá, the most serious problem facing the judiciary is that “a group of mutually-intertwined people have overtaken the judiciary, ones who don’t look at it as a service to the citizens but rather as a personally privileged state, which then internally reproduces itself and saps the judiciary’s professionalism and strengthens their privileges.”

Juraj Majchrák, the former vice president of the Supreme Court and the honorary chairman of the Association of Judges of Slovakia faces yet another, now the third, disciplinary proceeding against him within three months, Sme reported.

Harabin is proposing that Majchrák be suspended as a judge due to what Harabin calls a failure by the judge to handle his duties, claiming violations such as procrastination on cases. Majchrák, who has been a critic of Harabin and also his competitor as a counter-candidate for the post of Supreme Court president in 2003, only learned about the third disciplinary proceeding from journalists who were seeking his response.