UNIVERSITIES that admitted more students in response to a call from the Education Ministry to do so were not sure they would end up with additional funds to help them cover the costs of those students’ studies. The ministry’s request was part of the government’s efforts to keep unemployment under control by making university students out of some of those who were likely to become employed. 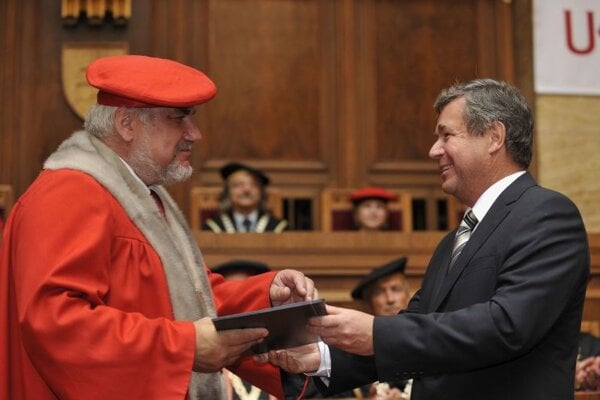 UNIVERSITIES that admitted more students in response to a call from the Education Ministry to do so were not sure they would end up with additional funds to help them cover the costs of those students’ studies. The ministry’s request was part of the government’s efforts to keep unemployment under control by making university students out of some of those who were likely to become employed.

The Education Ministry called on university rectors to consider their possibilities and capacities to admit an additional number of full-time students at the first and third levels of university studies. At the end of July, Education Minister Ján Mikolaj asked universities to admit up to 5,000 more bachelor level students and 300 PhD students this year than the universities had originally planned. The idea was to keep high school and university graduates who could not find jobs from becoming new additions to the unemployment rolls.

The measure was proposed at about the same time as Slovakia’s comprehensive accreditation of universities was being completed. This accreditation process, which was to divide higher education institutions into three groups according to the quality of their education and research, left five well-known Slovak universities at risk of losing their prestigious status as a university and being relegated to the category of a higher education institution.

Mikolaj promised that the additional students the universities admitted as part of the government’s anti-crisis measures would not be included as part of the accreditation criteria in the future.

Ladislav Mirossay, the Rector of the University of Pavol Jozef Šafárik in Košice, told The Slovak Spectator that his university admitted additional students only to those programmes that were not yet full in order to preserve the quality of education.

“We are not at all worried about the quality,” Mirossay said. “Our university passed the accreditation with 12-15 students [compared to the number of professors, assistant professors and lecturers], far below the limit of 20. We have never opted for admitting more students only to get more finances based on the number of students – sometimes it’s not even possible. For instance in medicine, you cannot let one patient be examined by 50 students at a time.”

Mirossay agreed that it is better to have students rather than unemployed but he has doubts whether 5,000 additional students are enough to have a significance impact on the country’s economy.

Ján Bujňák, the Rector of the University of Žilina, criticised the measure for not being targeted better. He told the Pravda daily that the ministry should have required the new students to be admitted to those study programmes that produce graduates in lucrative fields in which companies have a need for employees.

“Young people only want their diplomas and they don’t look at which professions are interesting in the labour market,” Bujňák told Pravda. In Žilina they have 550 additional students, most of them studying economic and managerial specialisations.

“Only 50 students opted for informatics, which [is an occupation that] has a future,” Bujňák added.

“The rectors did not get any concrete instructions or limits from the Education Ministry about the study programmes for the additional students,” the ministry’s spokesperson Dana Španková told The Slovak Spectator.

Rector František Gahér of Comenius University in Bratislava decided to respond to the call of the Education Ministry and admitted more students in its study programmes. Altogether, the university has admitted 346 students at the bachelor’s level, most of them to the Faculty of Law which added 100 students to its originally-planned 300 full-time students. In addition, 16 additional PhlD candidates will be studying at Comenius University next year. Gahér is not worried that it could lower the quality of education at the university.

“[The number] is only a fragment of the overall number of students at Comenius University, 1.5 percent, so we do not expect any significant changes in quality,” Gahér told The Slovak Spectator.

Some observers questioned the effectiveness of the measure from the very beginning.

“Increasing the level of education is always a good step,” Miroslav Beblavý, the chairman of the Slovak Governance Institute think tank, told The Slovak Spectator. “However, this measure was done in a way that seems counterproductive to me because it was carried out by forced pressure on the schools to admit more students, regardless of their ability to study.”

Beblavý believes there are two reasons why the additional students can have a negative impact on the quality of education.

“If the quality of the newly-admitted students is low, which is very likely, they will pull down the quality of the study for all since, generally, the quality and preparedness of one’s classmates is an important factor,” he said. “Secondly, if the state doesn’t pay extra for the additional students, the other students will carry the consequences since the quality of the teaching process will deteriorate.”

To finance the studies of the additional students, the Education Ministry had proposed an increase in expenditures of €38 million for the years 2009-2012 that would cover social allowances or accommodation expenses. However, the Finance Ministry has rejected that, stating that it is beyond the state budget’s capacities. Španková from the Education Ministry said this was a normal comment during the budgeting process and that talks are currently ongoing and the Education Ministry is searching for the appropriate budget category from which it can move funds for this purpose.

“Minister Mikolaj told the media repeatedly that the funds for these students are, or will be made [available],” Španková said, stressing that the necessary funds will be extended to the universities.

Gahér claimed that the rectors will insist that the government fulfil its promise and provide additional funds for the students they have admitted in order to lower the country’s number of registered unemployed.

Mirossay said the additional students will be included in his university’s budget plans for next year and that the university will surely make its ends meet and find the funds to finance the new students’ studies.

“We are used to allocating funds to where it’s most necessary and then missing it elsewhere – after all that’s why we live in creaky buildings,” Mirossay said.

The state budget approved by the government on September 30 for 2010 includes €12.6 million for those universities that responded positively to the call to admit more students. This year, €4.7 million should go for that purpose. The Education Ministry will divide it among the participating universities in the form of state subventions by the end of October 2009, according to the number of students admitted after July 23 and enrolled as of September 24, the SITA newswire reported. In the following two years, in 2011 and 2012, the government plans to spend more than €20 million for this purpose.