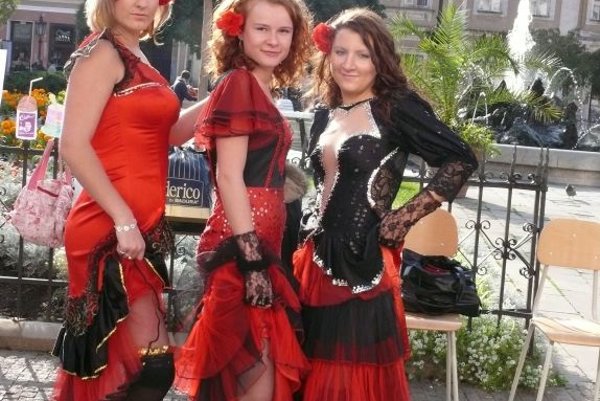 Ars Poetica – Both renowned and rising poets from around the world arrive in the capital to present and discuss their verses. In addition, several attractive concerts are available.

World Dog Show – The most prestigious canine event in the world, attended every year by thousands of two-legged and four-legged visitors, takes place for the first time in Slovakia.

21st Century Ballet – The Czech National Theatre from the Moravian city of Brno offers the local audience three contemporary choreographies with music by Dvořák, Martinů, Bach and others.

Primáši – SĽUK closes the autumn celebrations of its 60th birthday with the premiere of a new programme dedicated to the three first violinists who most contributed to the ensemble’s fame.

The Gipsy Princess – On entering its 57th season, Jókai Theatre presents one of the most popular Hungarian operettas, a piece written by Emmerich Kálmán in 1915.


LITERARY FESTIVAL:EVOLUTION of the Revolution is the subtitle of the 6th edition of the Žilina Literary Festival which will be held in Žilina from October 5 to 11. Though a good command of the Slovak language may be necessary for the poetry soirées and lectures, many other events for an international audience have been included. In addition to the exhibition “Carnivorous Sofa” by Slovak artist Pero Le Kvet and concerts by bands Tu v dome (in the photograph) and Kosa z nosa, a discussion forum with Keith A. Eddins, Chargé d’Affaires at the US Embassy in Slovakia, will be a highlight. He will speak about topical issues such as democracy, extremism and perhaps even Hungarian-Slovak relations. Admission is free for most events. More information at www.zlf.sk.

Ľudovít Fulla’s Home and World(s) – A collection of paintings, graphics, illustrations and drawings by Ľudovít Fulla, one of the most outstanding 20th century Slovak artists, is available at a gallery founded by Fulla himself in the 1960s.


DAYS OF SPANISH CULTURE:A WIDE variety of events are to be presented in Košice, between October 5 and 11 as part of the Days of Spanish Culture organised by the city’s secondary grammar school in Park Mládeže 5 - which has a bilingual Spanish programme - with support from the Spanish Ambassador. Starting with the Don Quijote flamenco musical on October 5, the calendar of events includes: a march down Main Street, a rendition of Carmen by Bizet, a holy mass in Spanish, the presentation of a mini-novel and a crash-course in Latin-American dances. The event ends with a gala Fiesta on October 10 and a guided tour of Košice on October 11. For the full programme go to: www.gpm.edupage.org.