IRELAND has given a green light to the further process of European integration in the manner envisaged by the Lisbon Treaty, a document which euro-optimists believe will bring a better future to the whole continent and one which euro-pessimists fear as a tool for bringing the EU closer to a single super-state. Slovakia has welcomed the outcome of the Irish vote. 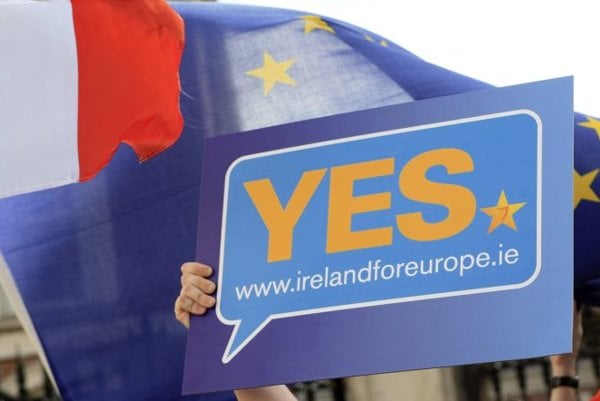 IRELAND has given a green light to the further process of European integration in the manner envisaged by the Lisbon Treaty, a document which euro-optimists believe will bring a better future to the whole continent and one which euro-pessimists fear as a tool for bringing the EU closer to a single super-state. Slovakia has welcomed the outcome of the Irish vote.

“The treaty obviously doesn’t solve all the EU’s problems – especially when it comes to effectiveness in decision-making and in policies or in transparency and democracy – but it’s a small step in the right direction,” Radovan Geist, the editor-in-chief of EurActiv.sk told The Slovak Spectator. “It’s in Slovakia’s interest that the EU is democratic, transparent and effective – and in this sense the result of the Irish poll is positive for us.”

The Slovak Ministry of Foreign Affairs issued a statement stating that Slovakia welcomes the positive outcome of the Irish vote since it opens the door for the treaty to be actually brought to life. The ministry also said it believes that ratification of the Lisbon Treaty will be soon finalised in all EU countries.

The polling stations attracted 58 percent of Irish voters on October 2, out of whom 67.1 percent voted in favour of the treaty – a result rather different from the vote in June 2008 when Ireland rejected the treaty.

The Irish Ambassador to Slovakia, Kathryn Coll, was very pleased by the positive result of the referendum.

“Against a uniquely difficult backdrop of a severe economic downturn, this is resounding evidence of the capacity of the Irish people to discern where their best interests lie, now and into the future,” Coll told The Slovak Spectator. “Everyone is happy and relieved that unstinting effort over many long months by the Irish government, the opposition and civil society ultimately secured this unequivocal yes to the EU and yes to the Lisbon Treaty.”

According to Coll, the Irish government believes that the result will give new momentum to the country’s economic recovery and that it should infuse the EU with renewed confidence in its ability to deliver for the citizens of member states.

The Irish ‘yes’ has drawn the Lisbon Treaty closer to its complete ratification, but there are two more countries still undecided about its ratification – Poland and the Czech Republic, where President Václav Klaus is known for his negative attitude towards the treaty.

Geist expects political pressure on Klaus to increase but he sees several reasons why the president might not bow to it.

“First, resistance towards the treaty is currently Klaus’ most important political agenda and thus he politically – and undoubtedly also personally – is happy to remain in the position of the person on whom ‘the fate of European integration’ depends,” Geist said. “But political speculations can also play their role – he might hold the signature until the parliamentary elections in the UK which will probably be won by the Conservatives, who subsequently will fulfil their political promise and organise a referendum in which the British will very likely reject the treaty.”

According to Geist, the problem of this scenario, however, is what happens next.

“Would the new British government decide to withdraw its signature from the document, even for a high political price or would it be satisfied with only a series of opt-outs or guarantees?” he said.