AIR TRANSPORT of goods is defined by its high reliability, security and speed. In principle it is used mainly to transport goods with high added value and low weight, and fast moving consumer goods. But it has also found a niche in just-in-time transport and for transportation of new goods to new markets, where it can avoid the necessity to build buffer stores and where turnover of capital is higher. 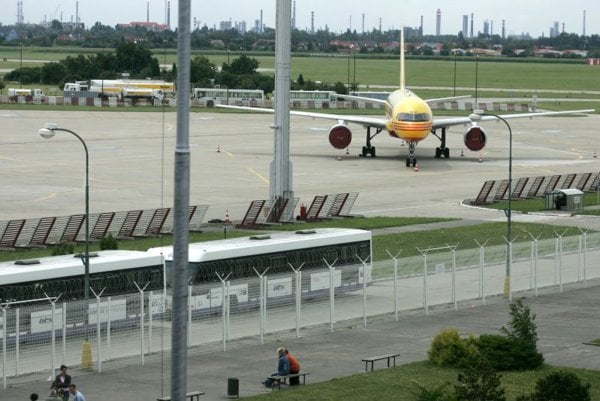 AIR TRANSPORT of goods is defined by its high reliability, security and speed. In principle it is used mainly to transport goods with high added value and low weight, and fast moving consumer goods. But it has also found a niche in just-in-time transport and for transportation of new goods to new markets, where it can avoid the necessity to build buffer stores and where turnover of capital is higher.

Antonín Kazda, head of the Air Transport Department at the University of Žilina, makes a distinction between air transportation of cargo and freight transport. While cargo transport is effected by the loading of goods into aeroplanes already being flown on scheduled routes by traditional carriers, freight transport involves the use of dedicated planes and routes.

“The number of regular lines being flown by traditional carriers with aeroplanes with the necessary capacity from Bratislava and Košice is negligible,” said Kazda. “From this point of view the transportation capacity offered by both of Slovakia’s biggest airports is negligible.”

Cargo transport, according to Kazda, is concentrated in the biggest hubs in Europe, which are able to offer planes and routes with sufficient capacity. Afterwards, goods are further distributed from these hubs. The nearest such centre, but not the most important, is in Vienna.

Regarding air transport of the freight type, this is not interesting within Europe, because specialised companies are able to transport any goods by truck within 24 hours.

“This is why the freight type [of air transport] is focused in particular on long-distance inter-continental transport,” said Kazda. “Transporters orient in particular on airports which are able to offer attractive conditions from the viewpoint of total costs, which include landing and handling fees; it is not decisive for them whether they land in Amsterdam, Vienna or Frankfurt - trucks will transport goods onwards.”

The third interesting area of air transportation of goods is parcel companies, which create their own hubs. The basic condition for creation of such a hub is unrestricted operation during the night and good highway and railway connections.

When all these are taken into consideration, Kazda is not very optimistic with regards to air transportation of goods via Slovakia, and the low figures for goods shipped through Bratislava Airport back up his views.

During the first seven months of 2009, Bratislava Airport reported a total of 6,227 tonnes of transported goods, of which scheduled carriers accounted for 5,868 tonnes.

Nevertheless, Bratislava Airport presents its results as being positive.

“In spite of the worldwide drop in the transport of goods, Bratislava Airport managed to maintain and extend the scheduled transport of goods, which rose by 92 percent to 7,292 tonnes in the January-August period when compared to the same period of the previous year,” Dana Madunická, the spokesperson for Letisko M.R. Štefánika – Airport Bratislava, told The Slovak Spectator.

The increase was mainly due to DHL Express, which launched a regular route to and from Bratislava.

“After the arrival of DHL Express in March 2008 the transport of goods at Bratislava Airport resumed,” said Madunická. “In the past it was based in particular on the use of charter planes of the IL-76 type, which are no longer suitable due to their high noise levels.”

DHL Express launched a scheduled route between Leipzig and Bratislava in late March 2008. For the time being the route is being used at between 80 and 90 percent capacity and has been fulfilling the expectations of the company.

“Such a fundamental step as the launch of a direct route is preceded by a very exhaustive preparation of the project, part of which was also an analysis of all possible risks as well as preparation of multi-stage alternative solutions,” Slavomír Hasmunda, gateway and customs manager of DHL Express (Slovakia) told The Slovak Spectator. “Thus we did not count on anything other than maximal fulfilment of our expectations. Moreover, the attitude of the Ramp Operations at Bratislava Airport to the whole project was very responsible and professional and they proved during the very first day that they are able to handle without problems also large container airplanes.”

DHL Express is currently the only express transport company flying directly from Slovakia and operates the only scheduled route to transport freight in Slovakia.

“We hope that we will not stay at Bratislava Airport alone and that gradually transportation of goods will start to develop here,” said Hasmunda.

He also hopes that much-needed background infrastructure, such as space for cargo, novel goods manipulation techniques, etc. will gradually also be built at Bratislava Airport.

“Bratislava Airport has a sound potential, which is, however, currently used only to a very limited extent,” said Hasmunda.

Last year was, from the viewpoint of re-organisation of the air network within DHL, of key importance.

DHL put into full operation the most modern sorting centre in Europe, in Leipzig, according to Hasmunda. This has significantly improved the effectiveness of its air infrastructure. The move has also opened up new opportunities and the direct link to Bratislava was one of them. Most often the link is used to transport commodities from the automotive and electro-technical industry.

This year DHL Express has already extended the current route between Leipzig and Bratislava. The daily route was prolonged to Sofia in Bulgaria with a stop in Bratislava. Simultaneously, the company increased the number of arrivals and departures at Bratislava airport by 100 percent to about 1,000 annually.

“In principle it is not our goal to increase the number of lines to and from Bratislava or extend the number of destinations serviced directly from M.R. Štefánik Airport, as is the case of some air companies transporting passengers,” said Hasmunda. “For us it is important to secure a stable air route with sufficient capacity into the central sorting centre in Leipzig, from where we have air connections, direct and indirect, to the whole world.”

DHL Express uses Boeing 757-200 Special Freighter aircraft with a capacity of 15 cargo containers, representing a load of up to 30 tonnes. According to Hasmunda, potential extension of the capacity will be achieved by a change in the type of aeroplane used and not by an increase in flights.

The company also provides non-scheduled air transport at Bratislava Airport, along with other companies. These are Walthair Europe, Arcus-Air-Logistic, Antonov Enterprise, BinAir Aero Service, Aero Nova, Farnair Switzerland, Midex Airlines and others. In total, non-scheduled transporters transfer up to 5 percent of the total volume of goods transported, according to Madunická.

Of the scheduled air carriers, ČSA Czech Airlines and Aeroflot load goods into aeroplanes on their regular routes in and out of Bratislava.

“Bratislava has a strategic position as a business routes’ crossroad,” said Madunická. “There is a close connection to the Czech Republic, Hungary, Austria and Poland. Close to the airport there is a cargo harbour as well as the railway, which means that goods can be immediately transported further. With regards to the advantageous geographical position of the airport and its connection to other transport infrastructure we have the preconditions to turn Bratislava into an intermodal cargo hub.”

The fall of SkyEurope

Kazda of the Air Transport Department explained that cargo transport does not appeal to low-cost carriers since it is not possible within their short turnaround times – Ryanair’s, for example, is about 25 minutes – to load cargo into their aeroplanes.