EVERYBODY knows Atomium, one of the most famous Brussels landmarks. Fewer people remember that this depiction of an iron crystal, magnified 165 billion times, was an iconic model built for Expo ‘58, the World’s Fair held in Brussels in 1958. And even fewer know that the Czechoslovak pavilion at that expo won the top prizes awarded by the general public and by the expo jury. 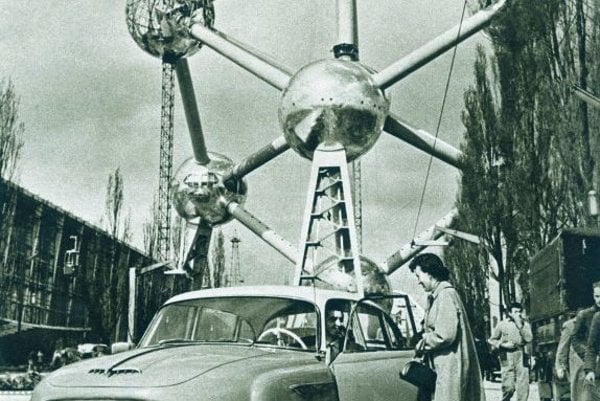 EVERYBODY knows Atomium, one of the most famous Brussels landmarks. Fewer people remember that this depiction of an iron crystal, magnified 165 billion times, was an iconic model built for Expo ‘58, the World’s Fair held in Brussels in 1958. And even fewer know that the Czechoslovak pavilion at that expo won the top prizes awarded by the general public and by the expo jury.

The Czechoslovak participation in the Brussels Expo has become legendary in what are now the Slovak and Czech Republics: for many people who either participated in the creation of the Czechoslovak pavilion and its exhibits or who visited it, it represented a turning point in their careers.

Indeed the overall victory of the Czechoslovak pavilion can be seen as having opened the door to a new lifestyle. The Brussels Dream exhibition in the Slovak National Gallery (SNG), subtitled Czechoslovak Participation at the Expo ‘58 World Exhibition in Brussels and the Lifestyle of the First Half of the 1960s, recalls the phenomenon as well as its aftermath.

“The exhibition has two focal points,” Daniela Kramerová, curator of the exhibition said. “One is related to the expo itself and the second one focuses on what the fair brought to Czechoslovakia. This means the huge designer wave, which was dubbed ‘Brussels style’ and which laid the foundations for the golden 1960s.”

The exhibition in Brussels was also very important in a worldwide context: it can be seen as the most important world fair of the second half of the 20th century. This is, in particular, because of the long period which had elapsed since the previous world fair, which took place at the end of 1939 and the start of 1940, according to Kramerová.

“Not only Slovakia, but also the world powers and actually all participating countries invested a lot of energy and money into it,” explained Kramerová. “It was one of the great cultural but also political events of the time.”

The layout of the exhibition in the Czechoslovak pavilion presented one day in Czechoslovakia, elaborated in three sections – work, relaxation and culture.

As Kramerová recalled, Expo ‘58 took place during a tough period in the political life of Czechoslovakia and the Czechoslovak pavilion represented a top-level political goal.

“What was presented at the expo in fact had nothing in common with the then-Czechoslovakia,” she said. “All the exhibits were unique artworks created specifically for this world fair. Or they were products presented as commonly manufactured in Czechoslovakia, but the opposite was the truth.”

Products presented were often prototypes made for the expo, which in the end did not make it into production.

“This is the Potemkin [Village] dimension of this Brussels illusion, of this dream,” said Kramerová explaining the name of the exhibition.

Nevertheless, visitors to Expo ’58 left charmed by this dream.

“Especially those from the West did not have the experience to enable them to expose this or they just allowed themselves to be charmed by this illusion and were not so interested in the reality of Czechoslovakia of that period,” Kramerová told The Slovak Spectator.

Kramerová sees a number of reasons as having lain behind the success of the Czechoslovak pavilion.

“On the one hand it was a moment of surprise because since the period of the so-called First Czechoslovak Republic only limited information was availabe about Czechoslovakia,” Kramerová told The Slovak Spectator. “Further, I think that political motifs also played a certain role, in which Expo was a competition between the West and the East and Czechoslovakia still remained somewhat in-between.”

“But when thinking about this from today’s perspective, I don’t think that we succeeded because of the individual exhibits – even though there were excellent pieces made from glass, textiles, Laterna Magica and other important things – but because of the overall concept of the pavilion,” said Kramerová. “It was done in a way which was very attractive for visitors with a minimum of written words, but with mainly visual information.”

The Brussels Dream exhibition arrives in Bratislava from the Czech Republic, where it was originally presented in Prague and Brno to mark the 50th anniversary of the Czechoslovak success.

Since Slovak participation in the pavilion was relatively small, the SNG has used this opportunity to enrich the exhibition with artworks from its collections created directly for the pavilion.

Girls on the Bank, a work in natural baked clay by Jozef Kostka, is an authentic piece of art that was presented in Brussels. Other works include drawings by Ladislav Guderna, which served as patterns for graphic panels of individual parts of the exhibition.

“This is a very unique opportunity to show why these works of art were created and from what they stemmed,” said Vladimíra Büngerová, who is cooperating on the display on behalf of SNG.