IN SLOVAKIA, caveat emptor is more than just a phrase. Lawyers urge potential investors to take extra care when buying real estate, because what is written on a property deed may not be valid. Past clerical or legal errors during the sale of a piece of property can result in your losing title to it, even if you bought it in good faith. This is precisely what happened to the producer of Mitická mineral water near Trenčín in western Slovakia. On October 14, the Trenčín Regional Court upheld a lower court decision and awarded the production halls and the water borehole of the Mitická operation to Libor Jakšík, a man whose name appeared on a list of suspected organised crime figures leaked from the Bratislava police in 2005. 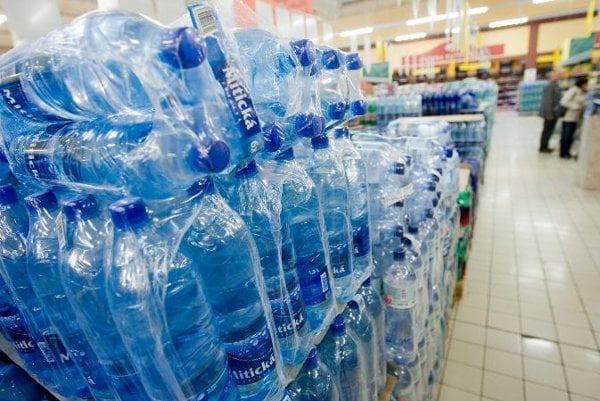 What will the new owners of the Mitická plant do with it? (Source: Sme)
Font size:A-|A+  Comments disabled

IN SLOVAKIA, caveat emptor is more than just a phrase. Lawyers urge potential investors to take extra care when buying real estate, because what is written on a property deed may not be valid. Past clerical or legal errors during the sale of a piece of property can result in your losing title to it, even if you bought it in good faith. This is precisely what happened to the producer of Mitická mineral water near Trenčín in western Slovakia. On October 14, the Trenčín Regional Court upheld a lower court decision and awarded the production halls and the water borehole of the Mitická operation to Libor Jakšík, a man whose name appeared on a list of suspected organised crime figures leaked from the Bratislava police in 2005.

Jakšík, a former policeman who left the force in 1993, owns a 93-percent stake in the Minerál-Invod firm. His company was struck from the Commercial Register in 1996 by a judge who ruled it had not been registered properly. At the time Minerál-Invod owned the land under the current Mitická plant as well as the framework of a building it was erecting there.

Even though the property changed hands several times after Jakšík's company was annulled, the Trenčín court ruled its title to these assets never lapsed. So when Jakšík achieved the unlikely feat of reviving his company in 2004, he was in line to recover the Mitická land and buildings, even though the new owner had paid millions of euros for them.

"If someone steals your bicycle, it makes no difference if he puts an expensive seat on it," said Marián Košut, a Bratislava lawyer representing Minerál-Invod.

Jakšík's title had been contested by Mitická's current owners, Trenčianske Minerálne Vody (TCM), controlled by businessman Slavomír Hatina through his Slovintegra holding firm. TCM paid over Sk400 million (€13.28 million at 2009 exchange rates) for the Mitická operation in 2003, and has since invested further millions in upgrades and maintenance.

Last year a court ruled that the land under the Mitická buildings belonged to Jakšík; now it has lost the factory as well.

"This decision means the loss of a €13-million investment and uncertainty for the 50 people who work at the bottling plant," said Tomáš Kurtanský, a Slovintegra representative. "It also sends a very bad message to investors."

It appears that the message in the Mitická case is not that unscrupulous speculators can hijack viable operations, but that the Slovak legal system cannot guarantee ownership rights.

Minerál-Invod was founded in 1992 as a joint operation between the Trenčianske Mitice municipality and a shadowy figure named Viliam Khandl, who reportedly now lives abroad. The two contributed the land and Khandl took a Sk24 million loan from the Slovenská Sporiteľňa bank. Work began tentatively on a borehole and production hall, but ceased after Khandl failed to make payments on the loan. The town finally secured the company's retirement in 1996 after a judge ruled that a signature was missing from its original application to be entered in the Commercial Register.

Two years later, the town of Trenčianske Mitice asked the land registry office in Trenčín to give it title to the land and buildings "given that we are the original owner". Even though the law requires company assets to go through liquidation or bankruptcy before title can be reassigned, the land registry office did what the town asked. In 2007 a court ruled that this had been a mistake, as "Minerál-Invod was their sole owner".

The town sold the land and assets for Sk4 million in 2000 to the Slovenský Hodváb firm, which began work on the borehole and bottling plant in earnest.

At the same time, Jakšík suddenly showed an interest in his moribund company.

Through a lawyer he argued that the court which had cancelled its registry had not delivered its decision by registered mail to the correct address, meaning that he had not been informed. The court agreed to send the notice again, giving Jakšík a new 15-day period in which to appeal.

In the appeal, Jakšík argued that the mistake in Minerál-Invod's original registry application was due to a clerical error by a public notary, and that he should be given another chance to register properly. The court accepted his argument, and on June 1, 2004 – three months after Slovintegra had paid hundreds of millions of crowns for Mitická – Minerál-Invod was again entered in the business register. The company immediately filed a suit to determine ownership of the Mitická operation.

"We did a regular due diligence process, but when we bought the company we were unaware that any other company had a claim on the property," said Kurtanský.

Jakšík's lawyer argued before the court that because Minerál-Invod had begun building its halls before the firm was abolished, the current buildings still belong to Jakšík, regardless of how much money the current owner had invested.

Košut cited a decision by the Czech Supreme Court, which had ruled in 2002 that a building is considered to exist for legal purposes "at the moment the layout of the first above-ground storey is clearly visible". The lawyer submitted pictures showing that Minerál-Invod had erected pillars and cross-beams on the factory building before 1996.

"From this moment, at which ownership ties to the structure are consolidated, all later construction work becomes irrelevant to the issue of title, even if the money invested far exceeds the expenditure on the original structure," read the Supreme Court ruling.

Trenčín judge Alena Radičová agreed with this argument, although given the importance of the case for ownership rights case law in Slovakia, she allowed Slovintegra to appeal her ruling to the Slovak Supreme Court. "This matter is of fundamental legal significance, as it involves matters that Slovak judicature has to date not confronted," she said.

It was not immediately clear what the new owners intended to do with the property. Libor Jakšík was out of the country and unavailable for comment, while Minerál-Invod board member Jaroslav Doktor said they intended to develop the site and increase production. Minerál-Invod does not have a licence to produce mineral water.

"Of course we're worried about employment," said Dušan Rozemberg, the mayor of Trenčianske Mitice, the vilage of 750 where the Mitická plant is located. "This is a company that was founded in 2004, under what pretence I don't know, and I have no idea what they intend to do"

Company reports in the Collection of Records at the Commercial Register show that TCM recorded annual turnover of about €6 million in 2006 and 2007, while Minerál-Invod showed no activity. The Mitická operation also recorded losses of €4 to €8 million every year since 2004, which Slovintegra ascribed to a very competitive market. Hatina said he was able to compensate for the losses with profits from other companies in his group. It is not known whether the new owners will have the same patience or deep pockets to continue producing Mitická.

Minerál-Invod lawyer Košut said they would be negotiating with the Hatina family. "It's true that we only built the basic structures, and that they made the major investments, and will have to be compensated. Negotiation will be tough, but I'm sure we'll reach an agreement."