TELEMARKETING is not a very widely used marketing technique in Slovakia. People still often connect it with badly conducted campaigns from the late 1990s and early 2000s. But the situation is improving and more people now accept their being offered goods or services via telephone. The economic crisis is forcing companies to cut costs and search for more effective ways of marketing, but is also providing them with new chances to improve their operations and communication with customers. 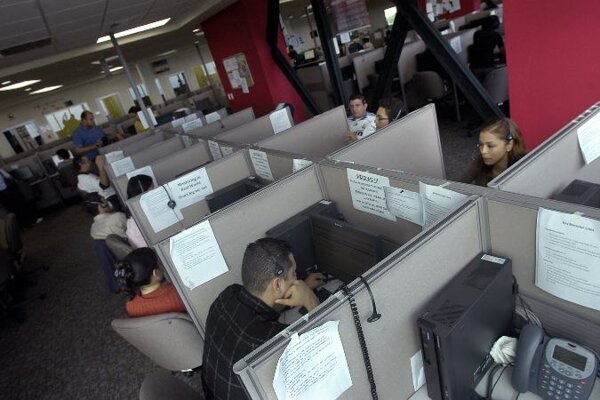 TELEMARKETING is not a very widely used marketing technique in Slovakia. People still often connect it with badly conducted campaigns from the late 1990s and early 2000s. But the situation is improving and more people now accept their being offered goods or services via telephone. The economic crisis is forcing companies to cut costs and search for more effective ways of marketing, but is also providing them with new chances to improve their operations and communication with customers.

“Public opinion about telemarketing has been influenced in Slovakia by the first campaigns conducted at the end of the 1990s and the beginning of the 2000s,” Viera Sandtnerová, CEO of High-Tech-Marketing SK, a company providing hardware and software solutions to telemarketing companies, told The Slovak Spectator. “Poorly prepared and badly conducted campaigns by some companies created the impression that telemarketing consists of irritating calls to unsystematically selected persons without their permission, to force on them products or services. Such campaigns are always doomed to failure.”

Due to such experiences, telemarketing activities in Slovakia were limited only to passive telemarketing in the form of inbound communication, i.e. contact and call centres, according to Sandtnerová.

“During the current period more and more companies have start using telemarketing as their direct marketing instrument and thus people more often encounter it in normal life,” Ďumbala told The Slovak Spectator. “In most cases, Slovaks perceive telemarketing in a positive way. There is a small difference in target groups, and we know from our experiences that communication with the b2c [business to consumer] target group is easier and the rate of calls made is higher when compared to the b2b [business to business] group.”

Beyond the border of Slovakia telemarketing is much more developed. Several countries in the European Union have adopted legislation related to telemarketing in order to prevent companies from making unwanted telemarketing calls and to protect end users from harassment, according to Sandtnerová.

Companies abroad and their clients regard modern telemarketing as an important and effective way of communication and customer care.

“In Slovakia, contact centres for large companies started to recover several years ago,” recalled Sandtnerová. “The increasing number of contacts with customers, competition and know-how from parent or sister companies called for telemarketing activities, but the intensity and quality of outbound campaigns, except for some bright exceptions, is still incomparable to foreign companies’.”

The experience of Linea Directa Communication appears to confirm that people in the West are more open to telemarketing.

“Based on our experiences in projects not only in Slovakia or central and eastern Europe, but also for partners from western Europe and overseas, we know that telemarketing is a common part of everyday life and people in western countries are more open to it,” said Ďumbala. “Customers [there] would rather buy products and services via phone without the need to go somewhere, compared to the habit common in Slovakia, where customers prefer personal contact and the fact that they can try the product or service in question.”

Telemarketing brings a range of benefits compared to other marketing strategies. Sandtnerová sees it as a personal, but on the other hand measurable, way of communicating with customers. Moreover, it is cost-effective when for the same cost as one visit by a salesperson – €220 on average – as many as 30 or more customers can be contacted by phone via a call centre, according to Sandtnerová. Contrary to other marketing tools, for example TV and radio spots or print advertising, the results are immediately visible.

“Telemarketing is not a one-way communication like, for example, a letter because a phone call generates a real dialogue,” said Sandtnerová. “The customer can ask a question and he or she will get an answer immediately.”

Referring to outbound telemarketing, which involves direct sales and promotion of a company's products or services, Sandtnerová highlighted its ability to transfer information quickly and directly to the person at which it is aimed.

“During a specific campaign we are able to find out precisely the interest in products and services in percentage terms, the rate at which the target group can be reached by phone, or the return on investment,” said Ďumbala. “During sale campaigns operators are able to get additional information about the target group, and with the help of these results to prepare further actions by the company and its marketing activities.”

Since telemarketing is underdeveloped in Slovakia, companies involved in the business predict significant development.

“Slovakia is just waiting for the main boom, even though it is necessary to say that compared with previous years the increase in telemarketing is considerable,” said Ďumbala. “Abroad, especially in western countries, telemarketing is a driving force for many companies and investments in some cases even exceeds the budgets allocated for classical marketing like TV, radio or print.”

Ďumbala sees strong potential in the sphere of active telemarketing, because companies are aware that they need to communicate more intensively with their clients on a daily basis. He adds that many companies do not fully use their existing databases.

Crisis as a stimulus

Telemarketing, like all other business sectors, has been affected by the crisis. But in its case this has meant positive influences.

“During the current period of economic downturn, demand for new opportunities to sell has been increasing,” said Ďumbala.

He had expected a steeper increase in activities linked to external call centres since outsourcing is an attractive solution for companies when costs are being cut. But in some companies the development has gone in the opposite direction, as they move outsourced activities back to their employees to avoid staff reductions during the crisis. Other companies, which have used telemarketing only to a small extent to date, have decided to reinforce this area.

“In general we can speak about an increase, but to a smaller extent than was expected before the crisis.”

Sandtnerová confirmed that companies have found they need to intensify their contacts with existing customers and that High-Tech-Marketing SK has experienced increased interest in its products from companies with contact centres.

Ďumbala also sees growing usage in a combination of direct mail, e-mail, or text messages in connection with follow-up.

“A frequent phenomenon is the joining of various forms of telemarketing, for example a market survey linked with the additional sale of a product or vice versa,” said Ďumbala.