A wall to keep out Roma

TENSIONS between the mainly Roma inhabitants of a settlement next to the village of Ostrovany, near Šarišské Michaľany in eastern Slovakia, and the village’s mainly non-Roma population now have a physical embodiment: a wall that the local authorities agreed to build in order to separate the settlement from the rest of the village. While non-Roma villagers claim the wall is the only way to prevent raids on their fruit gardens from the Roma settlement, local Roma protest that the wall has turned their settlement into a zoo. 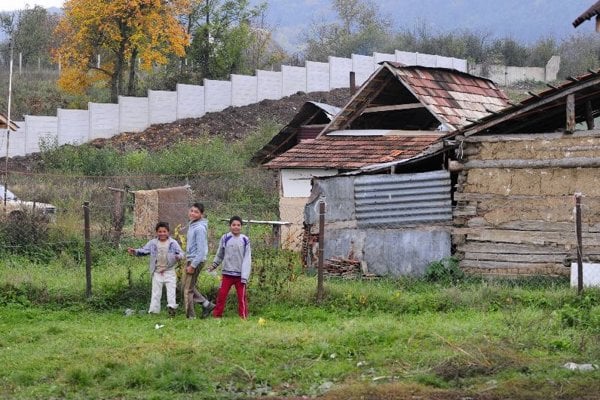 TENSIONS between the mainly Roma inhabitants of a settlement next to the village of Ostrovany, near Šarišské Michaľany in eastern Slovakia, and the village’s mainly non-Roma population now have a physical embodiment: a wall that the local authorities agreed to build in order to separate the settlement from the rest of the village. While non-Roma villagers claim the wall is the only way to prevent raids on their fruit gardens from the Roma settlement, local Roma protest that the wall has turned their settlement into a zoo.

Šarišské Michaľany recently became a symbol of the problems between the Roma minority and the non-Roma majority in Slovakia. Last year an inhabitant of the Roma settlement murdered a shop assistant in the village and this summer two boys from the settlement assaulted a 65-year old man who lost an eye and suffered other injuries in the attack. In response to the attack a far-right group, Slovenská Pospolitosť, used the village as the venue for the first of several protests which it organised to oppose what it called ‘the gypsy terror’ in eastern Slovakia.

The history of the Ostrovany wall, however, goes back to 2008 when the local council agreed to build it to address rising criminality in the village, which mainly took the form of theft from gardens close to the settlement. Construction of the 150-metre-long L-shaped wall cost the village €13,000. The wall is intended to become part of a complex which should also include a kindergarten, a primary school and a community centre. According to the SITA newswire, the Roma representative on the local council also supported the proposal.

The mayor of Ostrovany, Cyril Revák, told the Sme daily that he is under pressure from both sides: from citizens whose gardens and houses are a daily target of Roma children; as well as from Roma, for whom the wall is a symbol of humiliation.

“I’m not a racist,” Revák told Sme. “I know that there are many decent people living among our Roma. But on the other hand, I do not wish for anyone to go through hell everyday, like the people living in the neighbourhood of the settlement.”

While non-Roma have welcomed the wall as a form of protection, Roma have complained about it.

“They’ve built a Berlin Wall here for us,” one of the settlement inhabitants told the Sme daily. “But whom does it help? Neither the whites, nor us. We are here just like in a zoo. We don’t want [the wall], it should be taken down.”

Alexandra Rigóová from the Office of the Government Plenipotentiary for Roma Communities told The Slovak Spectator that the wall doesn’t solve the problem, which she said should be addressed by the prosecuting authorities, and that the local authorities should try to find ways to cooperate with social workers to ease the tension.

The plenipotentiary himself, Ľudovít Galbavý, said during a visit to Ostrovany that the wall could be classified as discriminatory.

Revák rejected accusations of racism and segregation saying that the wall only replaced fences that used to stand in its place but were damaged over time, SITA reported.

Unlike most politicians and state representatives, a deputy from the opposition Slovak
Democratic and Christian Union (SDKÚ), Štefan Kužma, defended the local authorities.

“It’s a desperate act of people who cannot protect themselves and whom the state cannot protect either,” he said, as quoted by Sme. His proposed solution to prevent crime is to change the law on offences and the Penal Code by lowering the age at which an offender can be held responsible for offences he or she commits from the current 15 to 14 years. Also, he proposes that any theft from houses or gardens be made a crime instead of just a misdemeanour.

In reaction to Kužma’s statements, reporters from the Roma Media Centre (MECEM) wrote an open letter to him in which they criticised him for using what they called ‘the collective guilt principle’. They also attacked the inactivity and inability of politicians generally to act effectively on Roma issues during the past 20 years, saying that they had only misused Roma to pursue their political agendas.

“If we are ashamed about something now, it’s about the fact that ‘our’ Roma politicians and activists did not find enough courage in themselves to say something on the topic [of the wall],” the open letter reads.

Štefan Šarközi from the Institute of Roma Public Policy criticised the wall, which he said puts all the inhabitants of the settlement into one category: thieves. He was sarcastic in his comments about it.

“Is the wall sufficient to prevent to Roma from stealing?” he told The Slovak Spectator. “Is it long enough so that they cannot come around it, is it high enough?”

According to Šarközi, building the wall was an easy solution, but it’s not clear where that leaves the people on both sides and what happens next.

“And what happens now?” he asked. “Will they not be allowed to cross the wall and leave the settlement?”

He compared the wall to a reservation and called it a failure of society on both sides. According to him, the money would have been better spent on prevention: on work by social workers in the settlement and guards to prevent crime.

“If someone steals, he or she should be punished for that, but we shouldn’t punish the whole community,” Šarközi said. “Where does that leave those who live in the settlement behind the wall now and who never stole anything?”