THERE is a wailing wall in Jerusalem. And now there is another one in Ostrovany. The local council of the small eastern Slovak village has erected a “múr” to protect the houses of its non-Roma population against intrusions by local Roma. 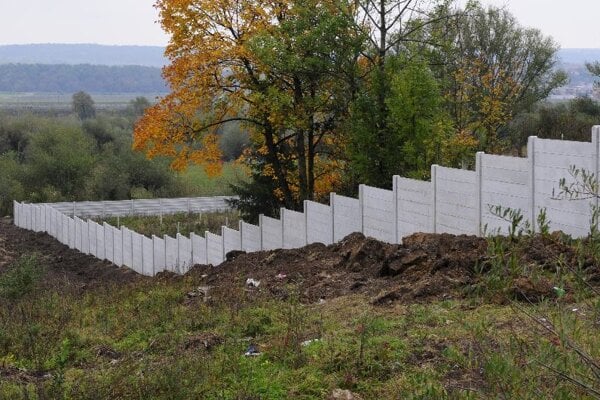 THERE is a wailing wall in Jerusalem. And now there is another one in Ostrovany. The local council of the small eastern Slovak village has erected a “múr” to protect the houses of its non-Roma population against intrusions by local Roma.

Previous attempts by residents to build protective fences individually failed, because their Roma neighbours dismantled them and stole the pieces. The new construction protects private property, but leaves open access routes into the village. Yes, this is a serious reason to mourn – any sort of barriers built by public authorities to separate people of various ethnic groups are unacceptable. If one such wall is allowed to stand, others may follow, and no one knows where this trend may end.

History shows that a wall tends to be a road to hell. But before you take your jackhammer to Ostrovany and tear the thing down, consider the simple question – what will you offer its people instead? Last year a man from the neighbouring Roma settlement murdered an Ostrovany shop assistant. This year two Roma boys beat up a man who had caught them stealing. He lost his eye. People in the village say they can’t leave anything outside, because it disappears immediately. So what options do the locals have?

It is easy to ponder the obscenity of segregation while sitting in safety, but the reality of life in Ostrovany is something different altogether. Would it be better if the locals decided to protect their property gun-in-hand? The village has already seen a march of extremists. Are additional ones preferable? Neither the individuals nor the municipality have the resources to keep the village guarded. So, as in other hard-to-solve cases, the answer seems to be – let the government sort it out.

That is unlikely to happen for several reasons. Firstly, politicians don’t care. Days after the news broke in all major media outlets, the Sme daily asked József Berényi, who heads the parliamentary committee for human rights and minorities, and who recently boasted that his SMK party is “probably the only one in Slovakia, which openly declares its intention to extend the rights of minorities”, for his reaction to the situation. “This comes as news to me,” was his reply.

The mayor of Ostrovany invited all 17 MPs from the region to visit the village. Only two came. The government’s plenipotentiary did arrive, condemned the wall, and said it was most likely illegal. However, even he stated he would not initiate court proceedings to pull it down.

The second reason why the government is unlikely to help is because no one seems to have any idea what to do. A few weeks ago opposition MP Daniel Lipšic proposed that the army be sent to patrol the streets in troubled areas. But the use of the military against civilians seems an even more extreme idea than any fence, and gained no support.

To ensure security, the obvious step would be to increase police presence. But to have policemen guarding every problematic area is unthinkable. If not for reasons of privacy, then for the money it would cost. And anything less than a permanent presence just won’t do. Programmes aimed at social inclusion are needed, but have two flaws – they provide long-term solutions, whereas the people in Ostrovany need to deal with their problems now. And it is questionable how much they can actually achieve even in the long run. Slovakia is not the only country struggling to help Roma. Examples of successful models are scarce.

Unlike its counterpart in Jerusalem, the múr in Ostrovany will hopefully not last for centuries. But given the complexity of the problem, it may be around for quite a while.