THE MINIMUM monthly wage in Slovakia will increase by 4.1 percent at the beginning of next year, to €307.70. 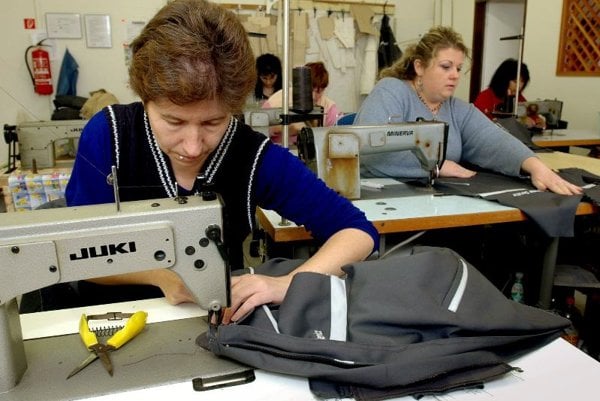 Workers at some textile companies get paid the minimum monthly wage and will appreciate an increase in 2010. (Source: TASR)
Font size:A-|A+  Comments disabled

THE MINIMUM monthly wage in Slovakia will increase by 4.1 percent at the beginning of next year, to €307.70.

The Slovak cabinet adopted this compromise solution on October 20 after both its social partners, trade unions and employers, failed to reach a joint solution during almost three months of talks.

"We were in negotiations with them until the last possible moment because we were seeking a consensus and despite immense effort we could not find it," said Viera Tomanová, Labour and Social Affairs Minister, as quoted by the SITA newswire.

The 4.1 percent increase upset trade unions as well as employers.

The Confederation of Trade Unions (KOZ) insisted on an 8.1 percent increase in the minimum wage calculated according to a mechanism set up by the law, while employers wanted the minimum wage unchanged, arguing that raising it would endanger jobs in Slovakia.

The cabinet’s compromise solution spreads the 8.1 percent increase over two years. As a result the minimum wage will rise by an additional 4 percent at the beginning of 2011.

In Slovakia 2-3 percent of the labour force receives the minimum wage. They work mostly in trade, the textile industry, agriculture, and restaurant and accommodation services.

The minimum wage also serves as a basis for calculation of damages paid for occupational injuries or contributions paid to the unemployed, as well as influencing the wages of other groups.

However, as of 2010, the minimum wage will no longer be used for calculation of the minimum health and social insurance contributions paid by the self-employed. Instead, these will be calculated using 44.2 percent of the average wage in Slovakia registered two years before as the calculation base. Thus the self-employed will calculate their minimum social and health insurance payments next year based on the average wage from 2008.