“TO GIVE Slovakia artists and music teachers; to help Slovakia produce its own music.” With these words noted composer Miloš Ruppeldt opened the Music School for Slovakia in Bratislava on November 6, 1919. Later to become the Bratislava Conservatory, now celebrating its 90th anniversary, composer Ruppeldt has indeed given the country several generations of top-ranking artists. 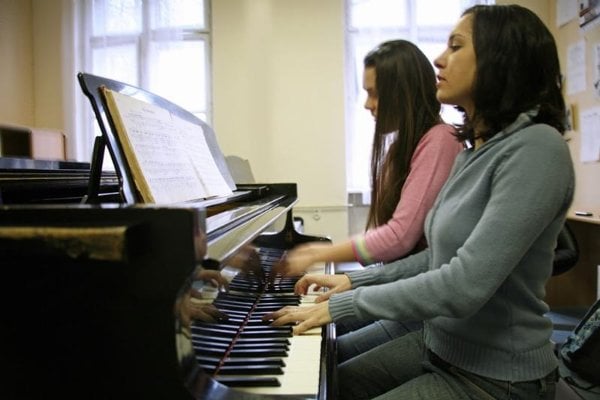 “TO GIVE Slovakia artists and music teachers; to help Slovakia produce its own music.” With these words noted composer Miloš Ruppeldt opened the Music School for Slovakia in Bratislava on November 6, 1919. Later to become the Bratislava Conservatory, now celebrating its 90th anniversary, composer Ruppeldt has indeed given the country several generations of top-ranking artists.

On October 21, a concert took place at the Opera House in Bratislava on the occasion of the conservatory’s jubilee. It featured three classical music compositions by Stanislav Hochel, Eugen Suchoň and Felix Mendelssohn Bartholdy, performed by some of the students of the celebrating school and conducted by Július Karaba.

However, this was far from the first concert the conservatory has prepared in cooperation with the Slovak Philharmonic Orchestra (SF). The latter regularly includes student performances in its programme and in this season, two more will be held in the capital.

“The particularity of the concerts included in this special cycle is that they are prepared by young people for young people,” said Martina Tolstová, spokesperson for the Philharmonic Orchestra. “Moreover, it is a good opportunity for the starting musicians to have a foretaste of the professional world and appear on a stage that will someday become a workplace for many of them.”

Indeed, numerous graduates of the Bratislava Conservatory, the oldest institution of its kind in Slovakia, today perform on some of the most prestigious stages or teach at arts schools around the country as well as abroad. Among the most successful alumni are opera singers Peter Dvorský and Edita Gruberová, actor Ladislav Chudík, or, going further back into the 20th century, composer Eugen Suchoň, author of the famous opera Krútňava (The Whirlpool).

According to Peter Čerman, the head of the school since 1990, the number of gifted students has not diminished compared with the past, though “the average quality is a little lower”. He suggested that this might be connected with the overall decrease in applicants experienced by arts schools over the past years, perhaps resulting from the fact that artistic studies are generally more demanding.

“Our students must practise 4 to 5 hours per day, which is hardly comparable with other types of study programmes, for example at grammar schools,” Čerman told The Slovak Spectator. “Moreover, they have to rehearse for various public performances and they often take individual lessons, meaning that they are given more assignments.”

On the other hand, the individual approach implies a much closer relationship between the teacher and the pupil, necessary for cultivating creativity, Čerman remarked.

“A good teacher is able to stimulate students by keeping a dialogue with them and proposing several alternatives to them so they are able to filter everything through their own artistic vision and eventually opt for the interpretation that best suits them,” he said. “To do this, however, there has to exist a high degree of confidence and attachment in the class.”

The contacts between teachers and students of the Bratislava Conservatory often continue long after the graduation ceremony. As Čerman stated, the school tries to keep in touch with its alumni, whether it be through various lectures they are invited to give at the school, or different concerts and performances in which they frequently take part.

In May 2010, for example, the conservatory’s drama department will present the premiere of a musical show entitled Zhrňajova nevesta (Zhrňaj’s Bride) at the New Scene Theatre in Bratislava. Written by composer and pedagogue Milan Dubovský and directed by his colleague, actor Dušan Kaprálik, the play will feature students and graduates of the school.

And since a jubilee celebration ought to be not only a time for exalting the past but also for thinking about the future, the staff of the Bratislava Conservatory have set some longer-term goals for the upcoming years, Čerman said.

“We will improve our equipment so that our music students can practise with top-quality instruments, we will fight for better remuneration of our teachers, and we will try to motivate more young people to study arts because we need them to continue providing the audiences with wonderful artistic experiences,” he emphasised.