University Library in Bratislava is the oldest research library in Slovakia and its founding is connected with the history of both the first Czechoslovak Republic and Comenius University in Bratislava. It opened on October 10, 1919 on the foundations of the former library of Elisabethan University, a Hungarian language university. 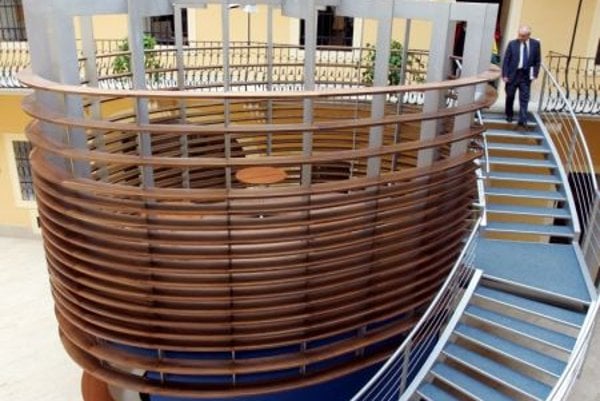 University Library in Bratislava is the oldest research library in Slovakia and its founding is connected with the history of both the first Czechoslovak Republic and Comenius University in Bratislava. It opened on October 10, 1919 on the foundations of the former library of Elisabethan University, a Hungarian language university.

The library is a specialised institution for foreign literature and is an archival library containing print copies of every thesis and dissertation defence made in Slovakia. After its founding, the University Library received many historical books, especially manuscripts and whole sets of books from various, smaller historical libraries. The basic collection was built from books from the former Public City Library in Bratislava, the library of the Law Academy in Bratislava, the old Jesuit library and the book collection of the former Jesuit secondary school in Bratislava as well as the complete library of the Slavonic Institute that operated in Bratislava from 1872.

The first Czechoslovak Republic between 1919 and 1938 enabled the University Library to further develop. However, the period after formation of the independent Slovak state from 1938 to 1944, was strongly influenced by Nazi Germany. The authorities from Hlinka People’s Party insisted on removing progressive literature from libraries and replacing it with Fascist and religious documents. For that reason, the quality and quantity of the library’s collections declined, primarily between 1939 and 1942. However, thanks to the effort of employees of the library, most of the discarded titles were preserved.

A law passed in 1959 regarding a unified system of libraries contributed to the rapid development of University Library. During the next three decades, its collection grew to 1,600,000 holdings. The library has developed cooperation with other university libraries, created a methodological department, and organised courses, seminars and trainings.

The most important project of the library was the construction of the Multi-Functional Cultural and Library Centre – Reconstruction and Revitalisation of Historical Buildings of Comenius University in Bratislava in 2001-2005. It consists of a complex of several buildings in the historical core of the Slovak capital: the former monastery of the Clare Sisters, the building of the Great Hungarian Royal Chamber, and the palace of L. de Pauli on Ventúrska Street.

After their renovation, they formed a single complex, connected with inner walkways which offer various services. International information centres of the Office of the Council of Europe, UNESCO, the Depository Library of the UN, and both the NATO and US Information Centres are located in buildings in Klariská and Michalská Streets.

Currently, there are more than 2.5 million items in the University Library’s collections. The library has undertaken several recent activities including a new service for parallel searching of documents and a web portal with a guide to Slovak culture with more than 1,000 pages of text in Slovak and English and 3,000 links, constructed in cooperation with the Culture Ministry and the British Council.