Fifth minister is tapped for job

THE FIFTH environment minister to serve in Robert Fico’s cabinet has a strange story of his rise to power. According to Jozef Medveď, all he did was send his CV to an employment agency: next thing an offer came to take up one of the most troublesome jobs in Slovakia. 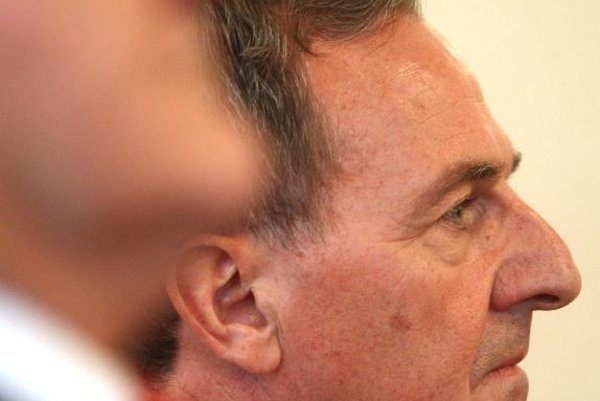 THE FIFTH environment minister to serve in Robert Fico’s cabinet has a strange story of his rise to power. According to Jozef Medveď, all he did was send his CV to an employment agency: next thing an offer came to take up one of the most troublesome jobs in Slovakia.

“I sent my standard CV to an agency and then I received an invitation, or rather a question, whether I was willing to go to a high level state executive position, not in politics but as an executive,” Medveď said in an interview with Hospodárske Noviny daily.

Medveď's statement thus defined the lead of almost every news story covering the appointment of the former deputy rector of a private college in Banská Bystrica as environment minister. Before his job as deputy rector, Medveď served as the dean of the School of Finance at the University of Matej Bel in Banská Bystrica.

With the appointment of Medveď, Dušan Čaplovič, who was serving as the interim minister after Prime Minister Fico stripped the Slovak National Party (SNS) of the Environment Ministry, will fully return to his agenda of minorities, human rights and knowledge-based society.

Čaplovič’s role at the ministry was to begin to tidy up the mess left by the previous SNS-nominated ministers: the bargain-basement sale of Slovakia’s emissions quotas, a dubious tender for disposal of power station fly ash and the leasing of valuable land at a price of just a few cents per hectare.

While Čaplovič managed to cancel two of the murky deals arranged by the previous SNS ministers within a few weeks, the lucrative contract in which Slovakia sold its excess emissions quotas to a company named Interblue Group at a low price remains on the table for Medveď to resolve.

SNS nominee Viliam Turský was sacked in mid August over his failure to handle the questionable deals to the satisfaction of the Prime Minister.

Medveď, who has no political party affiliation, said that he would work with information provided to him by Čaplovič, suggesting that “a certain continuity must be observed,” as reported by the TASR newswire. He also said that he is ready to fire any people who are not qualified for their jobs.

As to the qualifications of Medveď himself, environmentalists said they heard nearly nothing about any expertise he has in the environmental field.

Medveď served as deputy chairman of the firm Carpatia Consulta – Mortgage, which ended in bankruptcy in 2006 due to its long-term failure to meet contractual obligations, according to the Sme daily. However, one highlight of his career dates back to the government of Vladimír Mečiar when Medveď was the head of Banka Slovakia. The bank was renamed Privatbanka in 2005, Sme wrote.

After taking over as interim minister, Čaplovič terminated an agreement under which the Žilina-based state water utility company rented 300 hectares of land near the Gabčíkovo dam to the Xiland company for an annual price of about €0.02 per hectare for 99 years.

Čaplovič also ordered the CEO of the water management company, Peter Nemček, to immediately end another controversial contract involving disposal of fly ash from state-run power plants which had been awarded to the Esco Krupina company at a price tag of €85 million.

Observers agree that the deal with Interblue Group promises to be the most difficult task for Medveď.

Interblue Group bought Slovakia’s excess CO2 emissions quotas in November 2008 at a price of €5.05 per tonne, which according to critics is far below the price that Slovakia’s neighbours received for the sale of their quotas. Slovakia may have lost as much as €66 million on the sale to Interblue Group, according to the opposition political parties.

Interblue Group lost its exclusive pre-emptive right to purchase additional quotas from Slovakia based on a decision Čaplovič made on September 8.

After initially defending the sales contract, PM Fico admitted for the first time in late July that Slovakia might try to withdraw from it. Lucia Žitňanská of the Slovak Democratic and Christian Union (SDKÚ) said that Čaplovič had resolved very little by cancelling Interblue Group’s pre-emptive purchase right and believes the government should seek to terminate the whole contract.

Slovakia’s sale of its emissions quotas has led to the sacking of two environment ministers, Turský and his SNS-nominated predecessor, Ján Chrbet.