IT IS NOT every day that the international media spotlight is turned on the Slovak capital. But two days in mid October, when Bratislava hosted a meeting of NATO defence ministers, were an exception. The meeting, which brought together state representatives and international security experts from NATO member states and beyond, dealt with topics including Afghanistan, missile defence and the future of NATO. 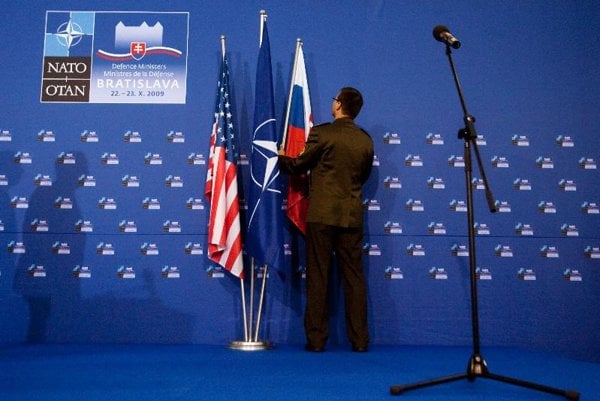 IT IS NOT every day that the international media spotlight is turned on the Slovak capital. But two days in mid October, when Bratislava hosted a meeting of NATO defence ministers, were an exception. The meeting, which brought together state representatives and international security experts from NATO member states and beyond, dealt with topics including Afghanistan, missile defence and the future of NATO.

The meeting was chaired by NATO’s new secretary general, Anders Fogh Rasmussen. Among other VIP attendees were Admiral Giampaolo Di Paola, chairman of the NATO Military Committee, Supreme Allied Commander Europe Admiral James Stavridis and ISAF Commander General Stanley McChrystal. The latter briefed participants on the current situation in Afghanistan, on his recommendation that more foreign troops be deployed, and on his proposal to boost the size of the Afghan army and police to 400,000 from the current target of 230,000, the Reuters newswire reported.

The ministers eventually agreed on four key priorities for NATO in Afghanistan: to place the Afghan population at the core of collective efforts by the allies; to build the capacity of the Afghan National Security Forces; to work more closely and effectively with international and Afghan partners to promote better governance; and to engage effectively with Afghanistan’s neighbours, especially Pakistan, a NATO press release stated.

“Getting consensus on these priorities will better focus our efforts and the efforts of our Afghan partners,” Rasmussen said. “It was a very worthwhile discussion, and I am pleased that we now have an agreed understanding on how we are going to transition from a NATO security lead to an Afghan lead.”

In addition, nine member states, including Slovakia, signed a declaration in Bratislava to contribute to a multi-national helicopter initiative designed to provide NATO and its operations with additional airlift capability through a multi-national cooperation programme, NATO announced, adding that it is hoped that other allies will join the programme too.

Slovakia also confirmed its intention to increase its force presence in Afghanistan by sending extra soldiers. They will provide protection for the existing engineer corps unit. The new troops were announced by Prime Minister Robert Fico and later confirmed by Defence Minister Jaroslav Baška, who said that Slovakia will now work on the timetable to dispatch the soldiers, the SITA newswire reported.

The government also wants to change the mandate of the Slovak soldiers in order to align them with the recommendations of General McChrystal.

“National restrictions should be eased so that the soldiers can be dispatched more flexibly and so that they are not confined only to their base,” the SITA newswire reported Baška as saying.

“I see [Slovakia’s decision to strengthen its forces] as an expression of strategic solidarity with our allies and as a contribution to the strengthening of the capabilities of NATO in Afghanistan,” Róbert Ondrejcsák, executive director of the Centre for European and North Atlantic Affairs (CENAA) told The Slovak Spectator.

According to him, there is a consensus that Afghanistan is the alliance’s most important operation.

“In connection with this operation there is a significant problem in that, despite the fact that it is the alliance’s priority, only some of the member states regard Afghanistan as a direct challenge or a threat to their security,” he said.

Ivo Samson from the Slovak Foreign Policy Association (SFPA) commented that operations in Afghanistan have been and remain a chance to maintain global stability without the use of weapons of mass destruction. The war is led by US and Afghan troops in the main, he said, but the Slovak contribution is more than symbolic.

“If the European allies refused to take part in this operation, they would put the existence of NATO at risk, because the US would sooner or later withdraw from the organisation and thus expose Europe to a security vacuum and a need to massively raise expenditure on defence,” he told The Slovak Spectator.

Another priority topic, particularly familiar to the central-European region, was the missile defence plans of the US and the alliance.

US Assistant Secretary of Defence Alexander Vershbow presented Washington’s new positions on missile defence, which counts on it becoming an inclusive NATO project. He called on member states to contribute to it through their active participation – he said that part of the system will be placed in two or three of them – and added that they should be ready to support the system financially.

The delegates at the meeting, headed by Rasmussen, said they supported the new plans. Slovak Defence Minister Jaroslav Baška also expressed his unambiguous support for the new plan at the end of the meeting, saying that “it is a great contribution to the collective defence of all NATO member states”, SITA reported.

Missile defence: for or against?

However, Baška’s statement appeared to be out of step with negative comments by Prime Minister Fico, who a day earlier, during a meeting with Rasmussen, had declared that he would never agree to any element of the missile defence system being placed in Slovakia. His words attracted the attention of the international media.

Rasmussen mentioned Fico’s negative attitude towards the plan at his meeting with Baška.

“This is just a hypothetical issue,” Rasmussen said, adding that no such requirement has been addressed to Slovakia or to any other country, SITA reported.

Baška said Fico spoke before the official plan had been presented by the US representatives and that he couldn’t have known about its final version.

“It was just a deliberate statement that follows political calculation and undoubtedly also the post-communist orientation of the current prime minister,” Samson said. However, he noted that the political calculation is right, because most Slovaks wouldn’t agree to place elements of a missile defence system in their country.

“But at the moment Slovakia hasn’t been invited to host elements of the missile defence system, and so the prime minister’s statement is moot,” he said.

“I believe that the prime minister’s statement was oriented towards domestic politics, to the electorate,” Ondrejcsák agreed. In his opinion, involving more NATO member states in the plans is a positive step, but the final version of the plans will only be known after negotiations that have apparently already started.

“In the long run, the American system, which will be launched in the coming years, could be interconnected with the system of the whole alliance,” he said.

“As long as there are missiles in the ownership of non-transparent states, every responsible politician must also build anti-missile systems,” Samson said.

“NATO is one defence pact and therefore it must include the defence of its own territory from foreign missiles into its strategy. […] If the missile defence system becomes an official platform of NATO, all the member states will have to approve it in the end if they don’t want to disable the alliance.”