Enthusiasm and propaganda 60 years on

AN UNUSUALLY large crowd gathered at the small, end-of-the-line railway station in Banská Štiavnica on October 24. They were well-wishers, who had come to celebrate the 60th anniversary of the line itself, known as Trať Mládeže, or the Railway of the Young. Apart from locals there were some 50 of the 47,000 young men and women, now in their 70s and 80s, who built the 21-kilometre long railway line 60 years ago. 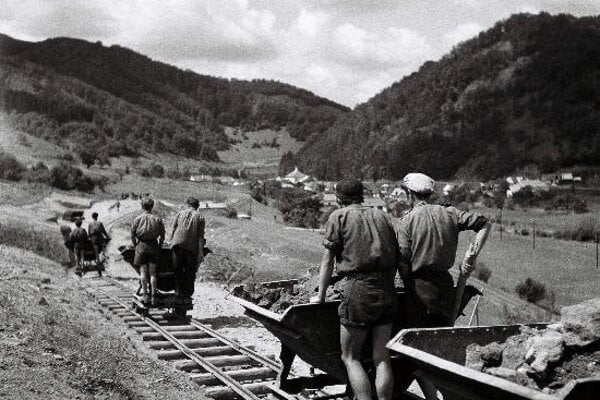 AN UNUSUALLY large crowd gathered at the small, end-of-the-line railway station in Banská Štiavnica on October 24. They were well-wishers, who had come to celebrate the 60th anniversary of the line itself, known as Trať Mládeže, or the Railway of the Young. Apart from locals there were some 50 of the 47,000 young men and women, now in their 70s and 80s, who built the 21-kilometre long railway line 60 years ago.

The commemoration was organised by the civic association Štokovec, a group of artists, art theoreticians, and friend of the central-Slovak town of Banská Štiavnica which has begun using the local railway station for cultural activities.

“The idea of the Trať Mládeže railway had been abused,” Zuzana Bodnárová from Štokovec told The Slovak Spectator as she explained the group’s motivation in organising the event. She was referring to the way the original project came to be seen as communist-inspired. “During preparations we found that some people thought that this event would promote one particular party, one ideology. But our goals were different. For us this railway belongs to Banská Štiavnica. The specific phenomenon which we are trying to understand and to comprehend is what motivated such a mass of people to work so hard under such conditions with such energy and enthusiasm.”

The railway line, which links Hronská Dúbrava and the spectacular UNESCO-listed town of Banská Štiavnica, was built between 1948 and 1949. Using a new route, it replaced an older narrow-gauge mountain railway, known as Anča, which had operated since 1873. Construction of the new route began in 1943, but was then halted and resumed only after the war. It later contributed significantly to the development of the region.

The project to resume building the railway line was born among a general sense of post-war euphoria and the Slovak Association of Youth undertook to complete it. Construction work was officially launched on April 5, 1948. It lasted for 19 months, including a three-month break during winter. The single-track line was ceremonially opened on October 30, 1949.

In total, over 47,000 young people worked on the project. They arrived for one-month periods, lived in wooden barracks or in tents, and worked only for their board, a diploma and a badge. Some worked to ease their access to university, to get accommodation in a hostel, or to improve their personal profile: as it advanced, the entire project was gradually adopted by the Communist Party. But the real motivation to participate, especially in 1948, was much more prosaic. It was the energy of young people and their desire to contribute to ‘better tomorrows’ for the war-town country in the post-war period. The fact that this effort had by the second year of the project acquired an ideological hue is, given the approach of 1950s Stalinism in Czechoslovakia, merely a historical fact, Štokovec believes.

“Of course, the red five-pointed [communist] star was behind this whole business,” said Bodnárová. “We do not excuse this, we only state it.”

Part of the commemoration at the railway station, which started with the arrival from Zvolen of a more-than-one-hundred-year-old locomotive drawing four historical wagons, was an exhibition of contemporary photographs of the local railway station, the railway itself and its builders, as well as other historical photos. There was also a hairdresser cutting hair, free of charge, in the style used when the Trať Mládeže railway was being built. There were screenings of period documentaries and news reports about the project, richly sprinkled with propaganda. Yet it was touching to see that when the young people on the screen sang, those in the audience could be seen silently singing along with them.

On the occasion of its 60th anniversary, Štokovec wanted to look at the phenomenon of the Trať Mládeže more closely and from unconventional angles. It found support from the co-organisers of the project, the town of Banská Štiavnica and the railway company Železnice SR, as well as direct participants. As many as 80 of them responded to the call of Štokovec and contributed their photos or memories to assemble a mosaic of recollections.

The original 1940s volunteers who attended the commemoration showed their badges or displayed the small ‘working books’ in which they were given stamps proving that they had participated in the Trať Mládeže project.

Štokovec, in cooperation with the Ethnographic Institute of the Slovak Academy of Sciences, plans to use some of the original photos that were exhibited in the railway station on October 24, along with volunteers’ recollections, as source material for an oral history book.

“I think that now is the last chance to meet these people and that it is worth preserving their memories,” said Bodnárová.