FOR PHOTOGRAPHERS, November is a red-letter month in Bratislava. For this is when the city traditionally holds its festival of photography. This year, in its 19th incarnation, the Month of Photography offers a range of exhibitions varying in colour, style, origin and themes, not to mention the fame of the authors. 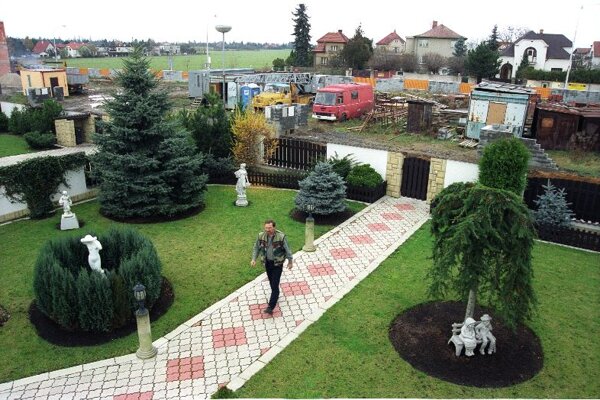 An image from the Little Towns project by Jiří Křenek, exhibited within Via Lucis. (Source: Courtesy of SEDF)
Font size:A-|A+  Comments disabled

FOR PHOTOGRAPHERS, November is a red-letter month in Bratislava. For this is when the city traditionally holds its festival of photography. This year, in its 19th incarnation, the Month of Photography offers a range of exhibitions varying in colour, style, origin and themes, not to mention the fame of the authors.

“This year the main theme of the festival is the 20th anniversary of the fall of communism in the countries of the so-called Soviet bloc,” Václav Macek, the festival director said as he introduced the programme.

Out of a total of 36 exhibitions, four are devoted to this theme. The Fall of Communism exhibition is an open-air display on Hviezdoslavovo and SNP Squares, showing how life looked in central Europe before communism fell. An exhibition by Hungarian-American Piroska Nagy documents events in Hungary between 1988 and 1989, while New Territory – Eastern Germany 1989-1999 covers the first decade after the fall of the Berlin Wall and the unification of Germany. A Czech project, Via Lucis 1989-2009, uses a similar concept to illustrate how Czech society has changed over the last 20 years.

Originally, the organisers had wanted to present, in line with the festival’s long-term concept of introducing one country each year through photography, an overview of American photography of the 20th century. But due to a lack of money this has had to be limited to an exhibition of the work of Ansel Adams, supported by the US Embassy.

“This is the first exhibition of Ansel Adams, a key figure in American and world photography in the first half of the 20th century,” said Macek. “This is a selection of 60 made by Adams himself from his archive of over 40,000 images, i.e. these are the images that Adams wanted to be shown in galleries and museums around the world.”

Adams is valued for his photographic style, which fused personal vision, technical precision and environmental advocacy and which had an unparalleled influence not only on the development of photography as an art form but also on how we see and think about landscape today.

After 11 years, the World Press Photo exhibition returns to Bratislava. It includes almost 200 images which have won awards in the annual contest’s ten categories.

Among other Slovak photographers Macek also highlighted a large exhibition by Juraj Bartoš, The Retrospective of a Journalist and Documentary Photographer, being held at the Slovak National Gallery.

“This is an exhibition which speaks about Slovakia, but also about photography, how its borders are widening, that not always the decisive moment but the banality of the theme is decisive,” said Macek. “After 20-30 years it acquires power and is just as fascinating as when Robert Capa captured the moment in which a soldier is killed during the Spanish Civil War.”

The Month of Photography does not just comprise exhibitions. It is also a portfolio review, giving photographers a chance to show their work to established photographers, curators, directors of galleries, editors of magazines, collectors or photography festival organisers.

This year the organisers are also reintroducing the tradition of auctioning photos, but with a change to the original concept.

In the past the auctions were organised especially for collectors, according to Macek, “but the success rate of these auctions had decreased and it seemed to us that demand from collectors was very low, so we stopped it two years ago.”

This year the images, which will be offered for auction at the Design Factory on November 25, were selected with the intention that people can hang them directly on the walls of their living rooms.

“We will see whether this changed concept, which is not oriented towards non-existent collectors but simply towards people who want to make their apartments nicer and own something unique, will work.”