MOST countries have their Al Capones, and Slovakia is no exception. The country’s best-known underworld figure is Mikuláš Černák, and he is now destined to spend his life in jail after Prešov District Court on November 10 found the former bus driver guilty of murdering six people and plotting another killing. 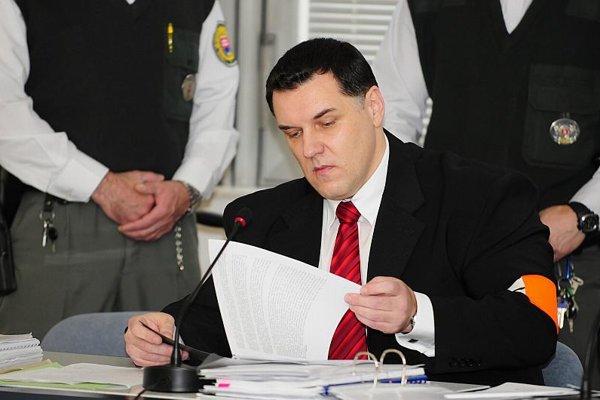 MOST countries have their Al Capones, and Slovakia is no exception. The country’s best-known underworld figure is Mikuláš Černák, and he is now destined to spend his life in jail after Prešov District Court on November 10 found the former bus driver guilty of murdering six people and plotting another killing.

Černák had confessed to the 1994 murder of police informer Jozef Filip. However, he denied being involved in the murders of gangland members Jozef Štefan, Pavel Lenhart, and Milan Sipos and his driver Emil Potásch. Černák was also found guilty of plotting the murder of businessman Milan Karcel, who had testified against him in an extortion case.

Černák’s former brother-in-law, Jozef Matula, was sentenced to a 12-year unconditional prison sentence for his role in Karcel’s planned murder.

A former organised crime boss in Banská Bystrica, Černák, who is now in his forties, has been behind bars since 1997, apart from two short breaks.

Černák’s lawyers said he would appeal against the verdict of the Prešov court.

“The verdict is illegal because the conditions for imposing an extraordinary punishment have not been met; the re-socialisation of our client is possible,” said Černák’s lawyer, Jozef Karabáš, as quoted by the Sme daily.

However, when earlier this year Černák confessed to murdering Filip in 1994 he named Reichel and Kaštan as his accomplices in the murder. Originally, Černák’s defence argued for a 12- to 15-year prison sentence.

Černák, who has also been described in the Slovak media as a former businessmen and tiger breeder, surrendered himself to police back in 1997. He was accused of extortion and blackmail and, later, the murder of a Polish citizen, Grzegorz Szymanek. Černák denied the charges, according to a chronology of Černák’s court trials published by the ČTK newswire.

In January 2000, the Banská Bystrica Regional Court sentenced him to 15 years in prison. After he appealed against the verdict, the Supreme Court ruled that Černák should serve only 8.5 years in prison sentence, for extortion. The court rejected the Szymanek murder charges on grounds of lack of evidence.

After serving half his prison term, Černák applied for release on parole and was let out of jail in late November 2002. However, in March 2003 the Supreme Court cancelled Černák’s release based on a complaint by then-justice minister Daniel Lipšic. Černák fled to the Czech Republic, where police arrested him in August 2003 and extradited him to Slovakia, ČTK wrote.

Between 2005 and 2007 prosecutors charged Černák with several more murders. Meanwhile, in December 2006, the Banská Bystrica Regional Court decided that Černák should be freed from custody, despite the murder charges, because of a special rule stating that Slovak courts cannot prosecute an extradited suspect for crimes other than those for which they are extradited without the consent of the extraditing country’s courts.

In January 2007, a Prague court extended its agreement so that Černák could be prosecuted for two other murders, of a police informer and a former policeman. In February 2007, Černák was briefly released but police were waiting for him outside the prison, where they immediately re-arrested him and charged him with the other murders. In 2008, the trial in which Černák stood accused of six murders and organising a seventh started at the Prešov District Court, the ČTK wrote.