STORIES about special schools full only of Roma children and segregated classes for Roma in eastern Slovakia might sound bizarre, but they are the real situation in many Slovak villages or towns. The lack of equal opportunities in some Slovak primary and secondary schools was the central topic of a discussion featuring Michael Roberts, the British Ambassador to Slovakia, Arthur Ivatts, a British expert on the education of Roma and Miroslav Beblavý, the president of the Slovak Governance Institute (SGI). 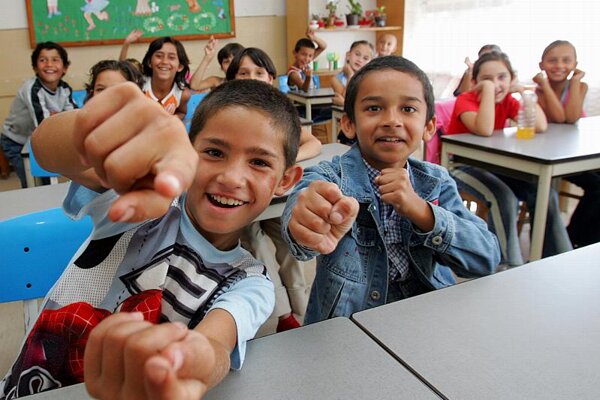 STORIES about special schools full only of Roma children and segregated classes for Roma in eastern Slovakia might sound bizarre, but they are the real situation in many Slovak villages or towns. The lack of equal opportunities in some Slovak primary and secondary schools was the central topic of a discussion featuring Michael Roberts, the British Ambassador to Slovakia, Arthur Ivatts, a British expert on the education of Roma and Miroslav Beblavý, the president of the Slovak Governance Institute (SGI).

According to Ivatts, the principle of equal opportunities means that all children should be educated together.

“The international evidence is that the more you segregate and divide up children, the less successful they are,” he said. “They are much more successful when they are educated together.”

This is often not the case in Slovakia, according to Roberts, who said that the special schools he visited were full of Roma children without any apparent special needs.

“There is a denial of life chances going on here and it is important that we should all be very sure that Roma children who do end up in special schools really need to be in those special schools,” said Roberts.

Beblavý conceded that Roma children definitely do not have equal opportunities in Slovakia since many of them are placed into the special education stream or segregated within mainstream schools. Paradoxically, this problem is not related to resource discrimination in Slovakia, as it is in many other countries where genuine discrimination based on unequal resources is evident. The cost is more for the state to put Roma children in special schools because the expenditure per student is much higher in special education than for pupils in the mainstream system.

“So it’s a particular kind of stupidity that you actually spend much more with much poorer outcomes,” Beblavý said. According to him, the reason is a combination of racism and the fact that societies in the central and eastern European region traditionally tend to divide up people according to their abilities.

“So I would not see the special education system as a sort of intentional conspiracy against the Roma; rather it’s just an ultimate expression of this belief that people have predetermined capability and that the right thing is to estimate where someone belongs and then to push them there,” Beblavý said.

One of the points most frequently used to justify the presence of Roma kids without special needs in special schools is, according to Roberts, that all of them were assessed and found to be in need of segregated education. In that case, the assessment method could be one problem, but Roberts pointed out that following the British example would require a change of the whole system in Slovakia.

“In the UK we pretty much decided that special schools are a bad thing. Full stop. And they should not exist for whatever reason,” he said. “And that might be an idea to think about in Slovakia.”

According to Beblavý, there are several practical solutions which could be a good way to pursue this point, include better mainstreaming of inclusion policies.

“One of the big paradoxes of Roma policy in Slovakia is that people get frustrated because they claim that they have tried everything and nothing works,” he said. “But the truth is that we have tried everything but we have mainstreamed nothing – with the exception of a few things which in themselves cannot change the situation.”

Beblavý suggested that rolling out simpler things and trying to mainstream them as soon as possible and then correcting them in the process might be more effective than engaging in small pilot projects that get extended extremely slowly.

A tool that policymakers in Slovakia are lacking at the moment is ethnicity-based statistics on the education system. These would allow policies to be better targeted, Beblavý said.

According to Ivatts, the pressure for ethnically-related data in the UK came from parents of minority students who at first rejected such statistics as discriminatory but later understood that these data could be a way to help their children perform better in school. In 2000, Roma ethnicity was added to the statistics collected in the UK.

“It was absolutely crucial, because that’s the only way society can measure whether policies on equality and human rights are really being delivered,” Ivatts said, adding that now it is a legal duty to do so and that the data are aggregated, not personal. He also said that representatives of the Council of Europe today believe that failure to collect this sort of data means a lack by society of the duty of care.

Ivatts admitted, however, that although a change of attitudes and more education of all involved parties, especially teachers, are important for inclusion policies to be successful, it all boils down to having enough financial resources at the end of the day. He suggested that EU structural funds might be a great help in this respect for Slovakia since they make large sums of money available for programmes of Roma inclusion.

The global economic downturn lowers the chances that governments will spend more on policies promoting equality and diversity. This concern was shown by a recent Eurobarometer survey which found that almost half of the Europeans (and some 63 percent of Slovaks) are worried that such policies will become funded less because of the crisis.

In fact, Slovakia’s 2010 state budget will cut the standard funding for primary and secondary education in nominal terms for the first time in Slovakia’s history, so it is obvious that extra money is not going to be there, according to Beblavý.

“But I don’t think money is the principle constraint,” he said. “In the special schools the current education is more expensive than in the mainstream schools. So there are some smart policy changes through which you could deliver better results with the same amount of money.”