ON NOVEMBER 17, Slovakia will mark the 20th anniversary of the launch of the Velvet Revolution which brought down the former totalitarian regime, the most remarkable milestone in the recent history of the country. There will be a number of events on this day across Slovakia marking the first steps taken to cross that threshold. 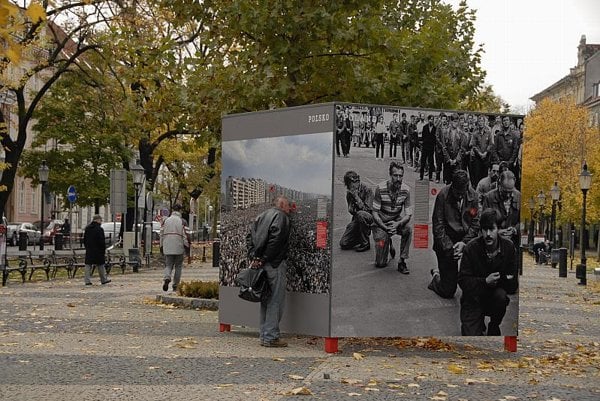 People stop to look at the photos on, and also inside, the outdoor display cubes. (Source: Jana Liptáková)
Font size:A-|A+  Comments disabled

ON NOVEMBER 17, Slovakia will mark the 20th anniversary of the launch of the Velvet Revolution which brought down the former totalitarian regime, the most remarkable milestone in the recent history of the country. There will be a number of events on this day across Slovakia marking the first steps taken to cross that threshold.

The biggest event is expected to take place on Hviezdoslavovo Square in Bratislava where a replica of a heart by visual artist Daniel Brunovský will be unveiled. Brunovský created the original sculpture from barbed wire, used to divide Slovakia from its western neighbour, from the place where the iron barrier began to first be symbolically cut – in Devín, in December, in 1989.

People now walking through Hviezdoslavovo Square can recall how the life looked during the previous regime. The Central European House of Photography (SEDF) has installed one part of its exhibition called the Fall of Communism, within its annual Month of Photography festival, in the square.

In total six large cubes show photographs of the historical moments in the fall of the regime in Czechoslovakia as well as events which preceded them in Hungary, Romania and Poland. There are holes within the walls of the cubes through which people can view photos depicting ‘normal life’ during the totalitarian regime.

The second part of SEDF’s exhibition is displayed on SNP Square, the exact place where 20 years ago tens of thousands of people gathered, listened to speeches and rattled their keys as a message of goodbye to the totalitarian regime. Here, all three cubes are devoted to events in Czechoslovakia, depicting tributes to leaders of the Velvet Revolution such as Milan Kňažko and Ján Budaj as well as to Alexander Dubček, who gave a speech in the square just a few days after November 17, 1989 – his first public appearance after many years of surveillance and house arrest by Czechoslovakia’s secret police.

“It was clear to us that there will be a lot of articles about this anniversary,” Václav Macek, the festival director, who together with Pavol Meluš curates the exhibition, told The Slovak Spectator. “Thus, we wanted to give people an opportunity to visualise these times and to inspire their interest in reading more about that period.”

Putting the exhibition together was much more complicated than Macek had originally expected. It turned out to be quite difficult to get eight appropriate and visually effective photos of the required technical quality from each country since they needed to be enlarged to 2 x 2.5 metres. But the final result is impressive. On the outside of one cube there is a Romanian tank with demonstrators on top of it passing a burning building and inside the photo depicts a queue of people in front of the then-popular La Fayette department store. There is also the sculpture of the heart constructed of barbed wire from the area around Devín, and inside a chilling photo of numerous fences of barbed wire outlining the territory of Czechoslovakia. The panels expressively demonstrate the cruelty and hypocrisy of the previous regime, perhaps curing people of any nostalgia for the previous regime when one litre of milk cost two crowns and a kilo of bread only a bit more.

For the 19th edition of the Month of Photography festival, the main theme is the 20th anniversary of the fall of communism in the countries of the Soviet bloc. Of the 36 exhibitions participating in the festival, four are devoted to this theme. In addition to the open-air exhibits in the squares, Hungarian-American Piroska Nagy is exhibiting documentary photos depicting events in Hungary between 1988 and 1989, including the official burial of Imre Nagy, the prime minister during the Soviet-suppressed 1956 Hungarian revolution and again in 1989 following the fall of the communist regime. These are on show at the Slovak National Museum (SNM) at Žižkova Street. Although Piroska Nagy is not a professional photographer, during that turbulent time she felt the calling to record these moments for history. After three years of doing so, she completely abandoned the camera.

The same SNM museum presents photos by German photographer Claudio Hils from 1989 to 1999, the first decade after the fall of the Berlin Wall and the unification of Germany. The exhibit called New Territory – Eastern Germany, 1989-1999 presents Neuland, as the former eastern part of the Germany was called, via the focus of the rather sceptical eye of Hils, who had refused to share the extremely positive mood of the country which sometimes ignored the complexity of reunification.
A Czech project, Via Lucis 1989-2009, uses a similar concept to illustrate how Czech society has changed over the past 20 years.