THE STRONGEST ruling coalition party at the state level, Smer, has sprayed its colour all across Slovakia, picking up almost twice as many mandates in the regional parliaments as Robert Fico’s party harvested four years ago, from its 70 seats in 2005 to 137 in this year’s balloting. Observers agreed that Smer emerged even stronger after the first round of regional voting on November 14, having successfully employed campaign tactics which used all the advantages at its disposal as a state-level governing party. 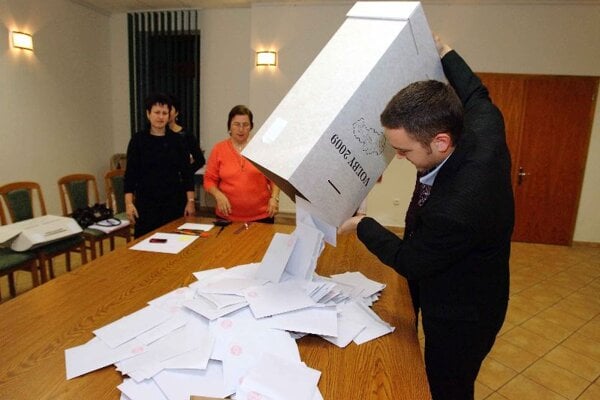 There were fewer ballots in regional elections than hoped. (Source: SME)
Font size:A-|A+0

THE STRONGEST ruling coalition party at the state level, Smer, has sprayed its colour all across Slovakia, picking up almost twice as many mandates in the regional parliaments as Robert Fico’s party harvested four years ago, from its 70 seats in 2005 to 137 in this year’s balloting. Observers agreed that Smer emerged even stronger after the first round of regional voting on November 14, having successfully employed campaign tactics which used all the advantages at its disposal as a state-level governing party.

Smer’s election success did not come as a surprise; neither did the low voter turnout, at 22.9 percent. However, what sociologist Pavel Haulík found surprising was that the regions most affected by high unemployment rates had the highest voter turnouts in the balloting for the presidents and members of parliaments of the so-called self-governing regions, the VÚCs.

“It has held true that VÚCs don’t belong among the representative bodies that attract voters,” Haulík told the TASR newswire, adding however that he believes the low level of voter participation that Slovakia has been recording in recent elections has bottomed out.

Four regional governors received absolute majorities and were elected in the first round while the two top performing candidates from four other regions will clash in a second round vote on November 28.

Zdenko Trebuľa, the incumbent Košice Region president, who was backed by a coalition made up of Smer, the Movement for a Democratic Slovakia (HZDS), the Hungarian Coalition Party (SMK) and Most-Híd party, won his race with over 60 percent of the votes.

Milan Belica, backed by the so-called ‘wide Slovak coalition’ which crossed state-level opposition and ruling coalition lines to include Smer, HZDS, the Slovak Democratic and Christian Union (SDKÚ) and the Christian Democratic Movement (KDH), won the race in Nitra Region by a similar margin.

The president’s post in Trnava Region went to another incumbent, Tibor Mikuš, who ran as an independent but was backed by the Slovak National Party (SNS) and received 53 percent of the votes. Juraj Blanár was the presidential victor in Žilina, supported by Smer, the Slovak National Party (SNS) and the HZDS. He captured 63.2 percent of the votes, the highest majority in all the regions.

The other four regions will now hold second round run-offs between the two highest vote-getters.

In Bratislava Region the joint candidate of the right-of-centre parties, Pavol Frešo, who won over 41 percent of the votes in the first round will face incumbent Vladimír Bajan, who polled just less than 30 percent as an independent candidate supported by Smer and the HZDS.

But according to the Sme daily, Bajan can now count on support from Branislav Záhradník, a former SDKÚ party member who ran as an independent candidate and captured 14.9 percent in the first round, finishing third.

In Banská Bystrica Region, Vladimír Maňka, the joint candidate of Smer and HZDS and a Smer deputy in the European Parliament, who captured 35.4 percent of the first-round votes, will face Jozef Mikuš, who is backed by a coalition of centre-right parties and polled 28.8 percent on November 14.

In Trenčín Region, incumbent president Pavol Sedláček received 45.6 percent of the vote, supported by the HZDS and Smer, and will face Martin Fedor, backed by a coalition of centre-right parties including the SDKÚ and KDH, who received 29.7-percent support.

Prešov Region will see a second-round race between incumbent Peter Chudík, a candidate of Smer who received 47.2 percent of the votes and Ján Hudacký, the joint candidate of the KDH, the SDKÚ and the Freedom and Solidarity party (SaS), who garnered 24.7 percent.

On Slovakia’s regional political map, the coalition between Smer and the Movement for a Democratic Slovakia was the most successful, winning 101 of the total of 408 regional parliamentary seats, representing a 24.8-percent share. Independent candidates will hold 55 seats (13.5 percent), while the centre-right coalition of SDKÚ and KDH won 50 seats, representing a 12.3-percent share, the Slovak Statistics Office reported. The main parties also won further mandates in other coalition combinations.

However, Grigorij Mesežnikov, president of the Institute for Public Affairs think-tank, believes that Smer did not steamroller all the other parties in the elections. He said that Robert Fico’s party merely strengthened its position.

“The results of the elections, as far as centre-right parties are concerned, were weaker than four years ago but the word ‘failure’ is too strong,” Mesežnikov told The Slovak Spectator.
Though Mesežnikov suggested that Smer will be the strongest political party in the next parliamentary elections he advised caution about drawing conclusions about the national vote from the results of the regional elections.

Observers pointed out that though the HZDS appeared to post a strong election result its success seems to have come only from running in coalition with Smer. This appears to be at the root of what has been called an electoral debacle by the Slovak National Party, which was left out of most of the regional coalitions.

Political scientist Juraj Marušiak said that the failure of the centre-right parties is visible, since their positions have weakened while Smer's has grown stronger.

“On the other hand, a relative success [for the traditional centre-right parties] is that new right-wing projects such as SaS, Most-Hid or the so-called Civic Candidates have not achieved any great success,” Marušiak told The Slovak Spectator. “The [established] centre-right parties are successful in that they preserved their dominant position within the right-wing camp.”

At the 44-seat Bratislava regional parliament the coalition consisting of the KDH, the SDKU, the OKS, and the SMK will have 26 seats or 59.09 percent. The coalition featuring the HZDS, Smer, and the HZD will hold 14 seats or 31.81 percent. The Freedom and Solidarity party (SaS), Civic Candidates, the Most-Hid party and one independent candidate will each have one seat.

In the 57-seat Zilina regional parliament, the coalition of HZDS and Smer will hold 21 seats, 36.84 percent; the coalition of the KDH, OKS and SDKU will hold 18 seats, 31.58 percent and the SNS will hold 6 seats. The HZD, Free Forum (SF) and SZS will each hold one seat and independent candidates will have 11 seats.

The 49-seat Banska Bystrica regional parliament has an absolute majority of the HZDS and Smer coalition with 27 seats, 55.10 percent; the SMK will hold 7 seats, 14.28 percent, the coalition of KDH and SDKU will have 6 seats, and the coalition of HZD and SNS will have 3 seats. The coalition of Most-Hid and the Green Party will have 1 seat and independent candidates won 5 seats, forming the remaining 30.06 percent.

The 45-seat Trencin parliament will be dominated by the HZDS and Smer coalition, which will hold 27 seats, 60 percent; the KDH and SDKU coalition won 8 seats; and independent candidates will occupy 10 seats.

The 54-seat Nitra regional parliament will be governed by the so-called wide Slovak coalition made up of KDH, SDKU, HZDS and Smer and the coalition captured 38 seats, 70.37 percent; SMK will have 13 seats, 24.07 percent and independent candidates won 3 seats.

The 62-seat Presov parliament will include a coalition formed by the HZDS and Smer which won 26 seats, 41.93 percent and the coalition of KDH and SDKU, which took 25 seats, 40.32 percent. The coalition of League, civil-liberal party, New Democracy, Free Forum and the Green Party will hold 2 seats; the Party of Roma Coalition will hold 1 seat; USVIT will have one seat while independent candidates won 6 seats.