MILESTONES in the life of a man are not only an occasion to celebrate, but also an opportunity to reflect on the past, valuate it and compare reality with earlier expectations. What is valid for an individual can be even more valid for history. 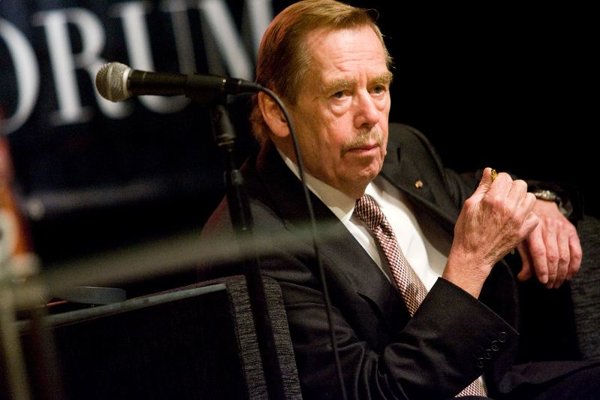 MILESTONES in the life of a man are not only an occasion to celebrate, but also an opportunity to reflect on the past, valuate it and compare reality with earlier expectations. What is valid for an individual can be even more valid for history.

The 20th anniversary of the Velvet Revolution brought such an opportunity, and the organisers of the Central European Forum, which took place on November 17-18 in Bratislava, used the occasion to invite the most eminent thinkers from and on central Europe to reflect on the current state of the region.

“I believe that it’s very good that this anniversary has become a real challenge to somehow reflect more deeply on who we are, what is coming, what we might want and where we failed in fulfilling previous expectations, and how we evaluate the past 20 years of freedom,” said Václav Havel, Czechoslovakia’s first post-communist president, who was one of the speakers at the forum. He made the opening speech to the forum’s last panel, devoted to democracy fatigue’, hosted by the Czech-born French thinker Jacques Rupnik.

“We are walking on the right path, we haven’t given up the earlier ideals, but we are limping, it takes a long time and the way has weird curves and deviations,” Havel said. “In our country it shows in a peculiar estrangement of politics and society, as if there was a deepening gap between them.”

According to Havel, this gap shows up in the language used to talk about politics: when something is said to have political motives or background, people take this to mean that the background or motives are suspicious.

“That means that politics is becoming something suspicious and I think that that’s not good at all,” Havel said. “It means that the best people refuse to enter politics, because it’s a somehow suspicious activity, a suspicious way of making a living.”

This, according to Havel, might be a post-communist problem in general, connected with a civil society which is not properly developed, but it might also stem from a specifically Czech, and Slovak, misunderstanding about the function of political parties, which he called an old illness from Austro- Hungarian times.

“It’s as if the parties did not understand that they are an instrument of politics, an irreplaceable, important instrument, but not an aim in itself; as if they did not know that their role is not to be a hidden manipulator of politics but to be very open, visible supplier of ideas and personalities; a place where the political debate is led, which gives birth to ideas,” Havel said.

Despite the often suspicious image of politics which discourages young people from entering politics, they should do so out of a sense of responsibility, Havel believes.

“It’s the responsibility for the world around him that is given to man, and it’s the other side of the coin of freedom,” he said. “To put it plainly, people should engage in politics if they cannot watch it anymore, and they want it to be different.

And I have gone through that myself, I resisted those who wanted me to run as a candidate for president in 1989, but what disarmedme was the argument: ‘If you criticise them all your life, show now how to do it better’. So the responsibility drags one into things that one wouldn’t otherwise want to do at all. I think that’s a basic human reason.”

One of the questions raised during the discussion was the strengthening of nationalist ideologies in the countries of central Europe and elsewhere. According to Ágnes Heller, a distinguished Hungarian-American philosopher, the demons of nationalism come along with democracy, because democracy and the nation state developed in Europe simultaneously and we should aim to make sure that democracy controls the demons of nationalism and not vice-versa. Democracy fatigue breeds nationalist movements, Heller said.

“But the nation state is not just a bad thing, it’s also a good thing, it’s good to have national literature, national poetry,” she said. “But you cannot have only the good stuff without the bad stuff. That’s the problem.”

The return of right-wing radicalism is, according to her, a result of questions that have never been discussed in the countries of central Europe. Instead they have been repressed and now they are returning in the form of nationalism and chauvinism.

According to Havel, on the other hand, globalisation and the unification of the world are also responsible for the presence of these demons in central European society 20 years after the revolution.

“The unification of the world means you cannot tell whether you are at an airport in Tokyo, in a shopping mall in Los Angeles or in a hotel in Prague,” Havel said. “This unification causes a counter-pressure, because someone wants to identify himself in a way, to define his identity, his difference from the others. And that’s exactly the need that helps the demons come out. Because most of the time they are nationalist demons, and they feel they are being strangled by the unified world.”

Havel stressed that in this respect people shouldn’t forget about the difference between ideas and ideologies.

“An ideology is a set of some ideas which looks like it’s got an answer for everything; it is a done, closed thing,” he said. “It’s very comfortable and even pleasant, because then one doesn’t need to think – it’s all already been invented, it’s packed in one little package. And what I think is important is to always prefer ideas and be cautious about ideologies.”

According to Heller, central Europe is just “one extremely European part of Europe”.


“Because what happens here, happens also in Amsterdam, Athens, London, Paris and many other capitals,” she said.

“That is, democracy fatigue is not just a central European phenomenon.”