IN A MOVE widely criticised by opponents of Robert Fico, Slovakia’s prime minister visited Russia on the eve of the 20th anniversary of the celebrations of the Velvet Revolution. However, Fico and his Russian counterpart Vladimir Putin did not discuss the revolution, but rather an ambitious plan to establish a joint Russian-Slovak gas company, which would store and distribute natural gas for Slovak businesses and households. 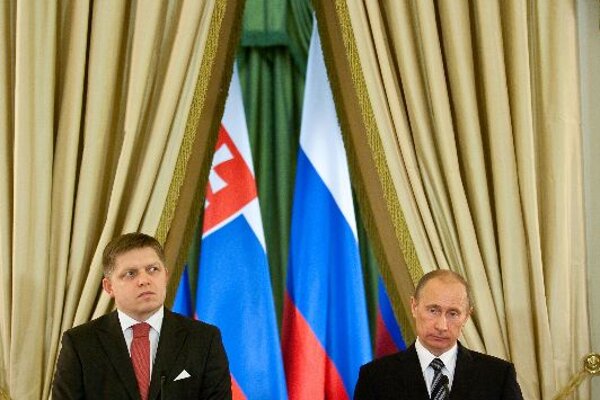 IN A MOVE widely criticised by opponents of Robert Fico, Slovakia’s prime minister visited Russia on the eve of the 20th anniversary of the celebrations of the Velvet Revolution. However, Fico and his Russian counterpart Vladimir Putin did not discuss the revolution, but rather an ambitious plan to establish a joint Russian-Slovak gas company, which would store and distribute natural gas for Slovak businesses and households.

As a souvenir, Fico was also given assurances from Putin that Russia will do its best to secure gas supplies for Slovakia in line with existing contracts, and that in case of impending problems an early-warning system would be put in place.

However, obstacles still stand in the way of a joint venture between Russian gas concern Gazprom and Slovakia, Putin and Fico agreed on November 16, the SITA newswire reported.


According to Fico, the joint enterprise would represent a form of competition for Slovakia’s major gas utility, Slovenský Plynárenský Priemysel (SPP).

“Such a company would then mean a certain level of competition, but also could deal with issues of gas storage on the territory of Slovakia, and perhaps the creation of new storage facilities specifically for gas which comes from the Russian Federation through Ukraine to Slovakia,” Fico said, as quoted by public-service broadcaster Slovak Television (STV).

In fact, the state holds a 51-percent share in SPP, which has provoked questions from experts and the opposition.

“If the state has a 51-percent stake in SPP, why is it creating competition for itself?” asked Peter Ševce, from the Institute for Energy Security, according to the Sme daily.

Alexander Duleba of the Slovak Foreign Policy Association also expressed concerns about the joint Slovak-Russian gas plans, suggesting that Gazprom might sell gas to its daughter company at a cheaper price.

“I do not think that this would help to increase the security of gas supplies for Slovakia,” Duleba told Sme.

The idea of a joint enterprise was first floated in January, when Gazprom deputy chief executive Alexander Medvedev visited Slovakia.

“The Slovak government views the Russian Federation as a reliable supplier for the territory of Slovakia,” Fico said, as quoted by the TASR newswire. “So I listened with great interest to reports about problems that could arise in the future with respect to Ukraine's inability to pay for gas supplies. We've agreed on a system of very early and intense communication on this topic.”

At the beginning of this year Russia turned off gas supplies to Slovakia and other countries during a commercial dispute with Ukraine. It left many of Russia’s major European customers without gas for about two weeks. The cut in gas supplies brought most of Slovakia’s major businesses to an almost complete halt.

Putin said that Russia will fully fulfill its commitments to its Slovak partners and would continue gas supplies through Slovakia.

Fico noted that, through SPP, Slovakia has signed a long-term contract for supply of 6.5 billion cubic metres of Russian gas annually.

“We have a strategic interest in fulfilling this contract down to the last detail,” said Fico, as quoted by TASR.

Recently, Putin has several times warned that if there are problems with Ukraine over its payment for Russian gas, Russia could once again halt supplies of gas through Ukraine to its European clients.

By Beata Balogová with press reports