Concert for the Aware draws crowd of thousands

EVEN those totally ignorant of Slovakia’s recent history might have noticed that last week, especially Tuesday, was somehow special – with streets and squares filled with more people than usual. The reason was not only that autumn this year has been milder than in previous years, but that the Slovak nation was commemorating one of the most decisive moments in its social and political life. 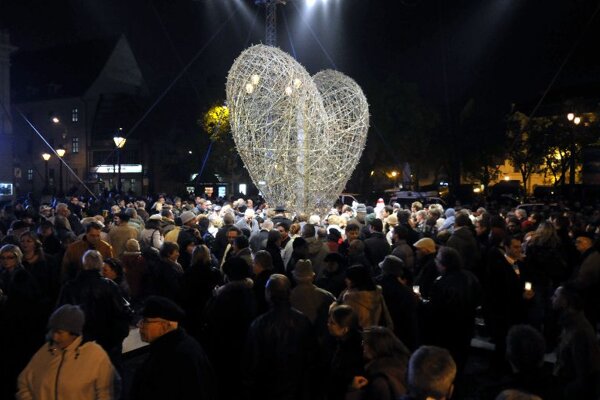 EVEN those totally ignorant of Slovakia’s recent history might have noticed that last week, especially Tuesday, was somehow special – with streets and squares filled with more people than usual. The reason was not only that autumn this year has been milder than in previous years, but that the Slovak nation was commemorating one of the most decisive moments in its social and political life.

Among the hundreds of events celebrating the 20th anniversary of the Velvet Revolution held throughout the country, it was probably the second edition of the Concert for the Aware, a mini-festival that kicked off at exactly 17:11 on November 17 at Bratislava’s PKO, which boasted the highest number of participants.

Organised by the Pohoda Agency and the Fair-Play Alliance watchdog NGO, the concert was aimed at a very specific audience with their most distinguishing feature being open-mindedness and good will.

What Gešvantner described as a “celebration of freedom” included, above all, numerous performances by some of the most popular Czech and Slovak musicians, such as Bez ladu a skladu, Para, Longital, Chiki-liki Tu-A and The Plastic People of the Universe, the legendary Czech rock band and highlight of the concert.

As Zuzana Wienk from the Fair-Play Alliance explained to The Slovak Spectator, the choice of the performing artists was not at all accidental.

“Some of the musicians began their careers before 1989, others are part of the younger generation, but what they have in common is that they defend certain values and are not interested only in the number of records they sell,” she said.

Apart from the concerts, several simultaneous literary readings, dance workshops and discussions focusing on both the revolutionary period and the hottest current issues were available.

Good Morning, Slovakia!, a new documentary movie about those who contributed to the creation of the independent Slovak Republic, was presented by its authors. The Protest, a famous drama by Václav Havel, was performed by the Divadlo na tahu theatre ensemble from Prague.

The evening also featured an awards ceremony where the Fair-Play Alliance and the Via Iuris NGO presented several Slovaks with “White Crows” as a mark of distinction for “outstanding persons who, in their attempts to change our society for the better, show an unusual sense of justice or public good and steady faith in principles in spite of obstacles and personal risks involved”, as stated in the official material.

“We have the impression that there are still too many people in Slovakia whose activities towards making Slovakia a more agreeable place to live go unthanked and unnoticed, and we therefore hope this prize will encourage them not to surrender,” Wienk stated.

Among the laureates was Judge Jana Dubovcová, who recently faced disciplinary proceedings and suspension after she openly criticised former Justice Minister Štefan Harabin in the media; and 18 employees of the Nízke Tatry National Park who opposed the authorities by refusing to use bark-beetle insecticides in the park, which cost many of them their positions.

“It is very hard for me to accept this award, not because I do not appreciate it, but because it is sad that 20 years after the Revolution we still need courage to express different opinions,” Dubovcová stated at the ceremony.

It seems, however, that Dubovcová’s views are shared by a large number of people, as the number of tickets sold for the concert more than doubled in comparison with a previous event, the first time it was held

“While last year’s concert drew around 1,000 attendees, more than 2,500 participants came to PKO last Tuesday, not to mention those who did not get inside because it had been sold out,” Gešvantner told The Slovak Spectator.

“This is something that made us all extremely happy. When the concert hall doors were opened and the seats started to fill up, we understood that the audience is the cherry on the top of every single event. We are glad that ours had such a great one; it will be easier to prepare future events.”