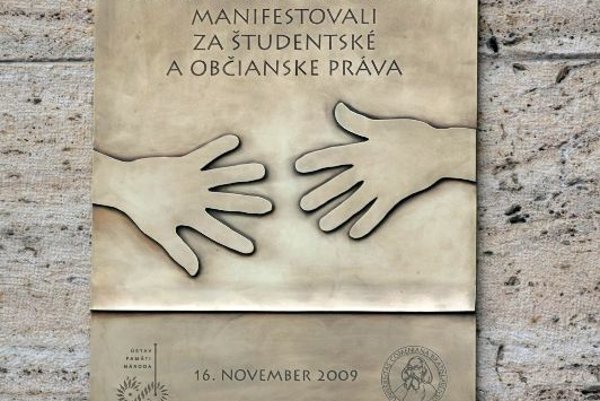 The memorial displays a pair of hands with the inscription: “To the Courageous Students of Bratislava Schools Who Demonstrated for Student and Civil Rights on November 16, 1989”. The plaque was created by sculptor Ján Hoffstädter and the hands on the plaque represent a symbol of connection. On the day after the students’ protest members of the general public joined in the demonstrations and November 17 is now a national holiday known as the Fight for Freedom and Democracy Day.

Ivan Petranský, head of the ÚPN, emphasised the key role the students played in 1989. “They were the driving force behind the revolutionary events known as the Velvet Revolution, or sometimes referred to as the Tender Revolution in Slovakia,” Petranský said. The rector of Comenius University, František Gahér, said that he deemed academic rights and freedoms to be among the most important elements brought about by the upheavals of November 1989. The ceremony was attended by the university management, ÚPN representatives, participants of the student protest march from 1989 and leaders of the current opposition political parties.

Sculptor Hoffstädter explained why the two palms of the hands on the memorial plaque do not touch each other. “It is the way to be connected, but not yet connected… It is evident that those two hands want to be connected and to create a common energy and viewpoint.”

The students’ march on November 16 was not the direct beginning of the revolutionary events of that year but according to Petranský it had symbolic importance for the events of the next day in Prague where students were attacked by state security forces.

Participants in the 1989 march said that the strongest moment of the march was when they stopped at Šafárikovo Square and shouted “we want freedom!” On that day the students also laid wreaths at the site where student Danka Košanová was killed by Soviet tanks in August 1968 and presented their demands in front of the Education Ministry.