The spy who prospered

WHEN Juraj Široký left the Czechoslovak embassy in Washington two decades ago, following his posting as secret agent and second secretary, he didn't forget about his colleagues in the communist intelligence service. 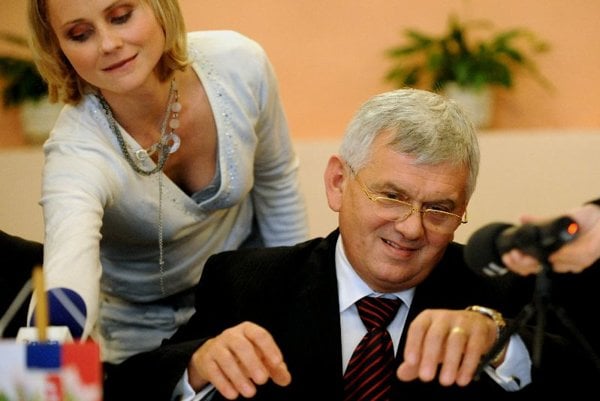 WHEN Juraj Široký left the Czechoslovak embassy in Washington two decades ago, following his posting as secret agent and second secretary, he didn't forget about his colleagues in the communist intelligence service.

After the 1989 revolution he continued to do business with them, first within an infamous asset-stripping operation known as the Harvard funds, and later within Slovak chemicals groups Chemolak and Plastika.

Today, Široký's "spy circle" has contacts with people at the top of the Economy Ministry under the Fico government, including minister Ľubomír Jahnátek from the ruling Smer party. Companies under Široký's wing last year won two tenders from the ministry together worth Sk120 million (€4 million).

Under the Fico government, Široký's firms have won several multi-million-euro contracts to build highways and renovate Bratislava Castle. He got his start in business in the Czech Republic as the partner of Viktor Kožený, dubbed the 'Pirate of Prague', who is currently on trial in the Czech Republic for looting billions of Czech crowns from the Harvard investment funds in the mid-1990s (see box). Kožený is currently in the Bahamas, beyond the reach of the Czech courts.

Široký did not respond to questions about his past from The Slovak Spectator. Economy Ministry officials denied that the businessman, who is widely regarded as one of the most influential figures behind the Smer party, had any influence over public contracts.

The Prague-based Centre for the Study of Totalitarian Regimes recently published a list of people who worked for the communist-era intelligence service at home and abroad. The name of Captain Juraj Široký appears there, along with that of Lieutenant Branislav Králik. Both men were officially second secretaries at the Czechoslovak embassy in Washington, but also worked as intelligence officers with the local residency, as foreign intelligence missions were known.

In 1993 Králik became the chairman of the board of Harvardský dividendový investičný fond Slovakia and the co-owner of the Harvard Real Estate Company in Bratislava with Široký. The two men were managers or owners of a further four companies.

Major Josef Poštulka was the Washington 'resident', or head of the Czechoslovak intelligence mission there. According to Juraj Široký's intelligence file, which is with the Nation's Memory Institute in Bratislava, Široký was Poštulka's deputy in Washington from 1988 to 1990.

Following the 1989 revolution, Poštulka's name became linked to Harvard as well. According to the charges filed against Viktor Kožený by the Czech prosecution in 2006, Poštulka was the director of a Cyprus-based company called Harms Holdings. Harms was part of the portfolio of the Harvard funds, and was involved in dubious share transfers.

Poštulka later became the managing director of the Czech company Plastika-Isol from 1998 to 2004, the same period that current Slovak Economy Minister Ľubomír Jahnátek was head of the supervisory board.

Poštulka was also a director of the Czech company Chemolak Trade. He was replaced in 2005 by Miroslav Trebula, who until February of this year was the director of the international trade section of Jahnátek's ministry.

Široký indirectly owns stakes in both Plastika and Chemolak. The Slovak Spectator was unable to reach Poštulka for comment. In a prior interview with the Hospodárske Noviny daily, Široký denied working for the communist state security apparatus, the ŠtB.

"I was never either an employee or a collaborator with the ŠtB. I worked in the state administration, in the foreign service as an employee of the foreign ministry. That's all I can tell you.“

According to an evaluation in Široký's ŠtB file, however, the ŠtB was happy with his work for them in Washington. "He gradually came to grips with the complex issues involved in political espionage. He took an active part in leading the residency, and in preparing complex activities."

Peter Bučka, currently the head of office at the ministry - the top non-political post - was also sent to Washington in 1985 by the communist military intelligence, with the cover of a diplomatic posting. After two weeks he was exposed as a spy and was recalled. "There is no reason to connect this with Široký," he said of his employment with the ministry, adding: "Minister Jahnátek is my former classmate."

The Economy Ministry refused to comment on whether former ŠtB officers from Washington had any influence on ministry affairs. "This is a speculative question and it is not related to the functions of the ministry," said spokesperson Dagmar Hlavatá.

Chemolak last year won a tender worth Sk60 million (€2 million) to supply paint to the electricity grid company SEPS, which comes under the ministry's authority. The bit-Studio company, which is owned by Široký's Druhá Strategická, won a tender of similar value for supplying computers and servers. According to the ministry, the firm's bid was the cheapest of three submitted.

"The fact that bit-Studio is owned by Juraj Široký is irrelevant to this contract," said Hlavatá. "We see no reason why bit-Studio should not have won this contract from the ministry if it met the conditions of the tender."

The story of the Harvard funds

DURING the early phase of privatisation in the Czech Republic, the government handed out 'coupons' that people could redeem for shares in state companies. In the absence of significant pools of domestic capital, it seemed the easiest way to put assets back in private and local hands.

A young Czech emigrant and Harvard University graduate named Viktor Kožený saw an opportunity. Using a slick advertising campaign, he promised people who gave him their coupon books in exchange for shares in his 'Harvard' investment funds that they would receive 10 times their deposit. At its height in 1994, the Harvard funds controlled stakes in 50 of the biggest Czech companies, and was worth Kč60 billion, making it the largest non-bank investment fund.

But the promised returns never materialised, and the Harvard funds were stripped of their assets and ended up in bankruptcy. Kožený fled to the Bahamas, while his partner Boris Vostrý is in hiding in Belize.

The public finally got a glimpse of what went on at Harvard when Czech prosecutor Zdeněk Častoral filed 350 pages of charges against Kožený and Vostrý for fraud in 2006. The document, which is available on the internet, alleges that Kožený used his power of attorney for the Harvard funds to simply transfer company shares in the Harvard portfolio to offshore companies located in Cyprus. These Cypriot companies either paid nothing for the shares, or sent only an initial and insignificant payment.

Money was siphoned out of the Harvard funds in other ways as well. For example, according to the charges, Kožený bought shares on Harvard's behalf in the Czech firm SPT Telekom for Kč2,710 each from the Cypriot company Zenko Trading. A week later, in September 1995, he sold the same shares back to Zenko - but this time for Kč2,215 each.

"Kožený signed for Harvard, and his colleague, Juraj Široký, signed for Zenko," wrote Častoral. Through six such 'buy high, sell low' transactions Harvard suffered damages of Kč250 million, worth over US$10 million at the time.

Široký did not respond to questions from The Slovak Spectator. In an interview with the Hospodárske Noviny daily he said that he had been interviewed by Czech police in the Kožený fraud case. Regarding the SPT Telekom shares he said that "these were returned in a week. They were the same shares. That's what those police were asking about".