Downturn of the economy – downturn in morals?

HOW does the economic crisis affect younger market economies still in their transformational process, Slovakia among them? That was one of the questions discussed at the Central European Forum commemorating the 20th anniversary of the Velvet Revolution in Czechoslovakia, which started the democratisation process in political life and the transition from a centrally-planned economy to a market economy. The panel was hosted by one of the leaders of the November 1989 revolution, Martin M. Šimečka, and was named “The open society in the time of crisis”. 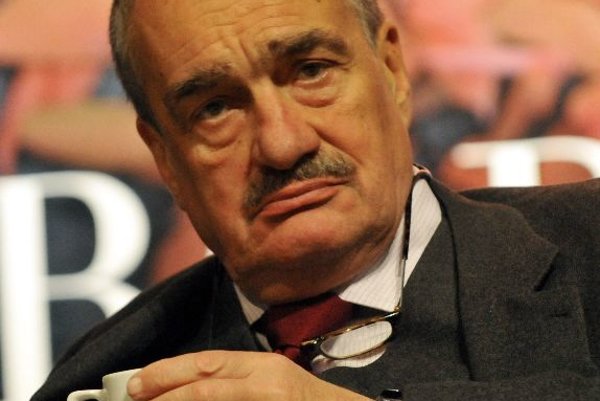 HOW does the economic crisis affect younger market economies still in their transformational process, Slovakia among them? That was one of the questions discussed at the Central European Forum commemorating the 20th anniversary of the Velvet Revolution in Czechoslovakia, which started the democratisation process in political life and the transition from a centrally-planned economy to a market economy. The panel was hosted by one of the leaders of the November 1989 revolution, Martin M. Šimečka, and was named “The open society in the time of crisis”.

Brigita Schmögnerová, Slovakia’s finance minister from 1998 to 2002 and currently the vice president of the European Bank for Reconstruction and Development (EBRD), spoke about the bank’s recent analysis which showed the impact of the crisis on the transformation process in the post-communist countries and the paradigm that was implemented at the beginning of the 1990s in all the post-communist countries, the paradigm based on what is now called neoliberal capitalism.

“The model of neoliberal capitalism was created in the 1970s but as the communist regimes in Eastern Europe fell, it grew stronger,” Schmögnerová said. “There was a religion of the self-saving market.”

At that time, the circumstances were favourable to the model since economic neoliberalism was promoted by the international organisations that were, and in fact still are, largely under the influence of US policies, according to Schmögnerová. And the post-communist countries accepted this model, she added, because they wanted to do so but also because they needed loans to strengthen their reserves, which in turn were conditioned on accepting that model.

“What has the crisis done to all this?” she asked. “The orthodox transformation model was very simple and based on three words: privatisation, liberalisation and stabilisation. And if we look at what the crisis has done in post-communist countries we can see whether there is a shift away from this model. Are they turning their backs on it? The answer for the moment is: not at all.”

According to Schmögnerová, the nationalisation of some industries, for instance, is much more visible in the US. And regarding liberalisation of markets, she said there is no significant turn, nor any protectionist measures – despite the criticised law on strategic companies which was passed in Slovakia recently. She said some questions remain about stabilisation.

“The crisis has hit the public finances from both sides, because lower economic growth causes less revenue coming into the state budget and the expenses grow because we need to provide for those who lost their jobs,” she said, admitting that the crisis caused destabilisation of public finances.

“But the question is: is it good that the model that to a large extent stands behind the crisis is now regarded as good enough to continue, without any changes?” asked Schmögnerová. According to her, the governments were rather open to making changes to the current neoliberal economic model when the crisis culminated, but now that it seems their economies have started to recover, they don’t appear to be ready to fulfil this commitment to introduce measures that would not only soften the crisis impact but also measures that would change the model and strengthen the position of the state.

According to Schmögnerová, the state should regulate, watch over the market and solve the failures of the market and misbalances that were caused by the previously-used model.

“When we look at the development of capitalism in Czechoslovakia, there was a change introduced by people who grew up in the times of socialism, with the image that everything can be changed with the overall change of the system,” said Prince Karel Schwarzenberg, former Foreign Affairs Minister of the Czech Republic.

According to him, there were people that recognized that the socialist system was backward and non-functioning in comparison with capitalism and when the opportunity came in the form of the Velvet Revolution, they introduced capitalism. But they did it in the same way as the generation of their parents when they introduced socialism, Schwarzenberg said.

According to him, capitalism emerged in a society that had very strict moral rules, in 17th century Holland and England. Even the capitalism of Margaret Thatcher still used strict quasi-religious methods, he said.

“We thought here that it could be done without rules,” Schwarzenberg said. “We believed, as Marxism taught us to, that the most important, the basis, was the material and that the spiritual was just an extension. But in fact it was the other way round. We thought it was like in a factory, to change production model number 3 into production model number 4, we use a little bit different machinery and it will work. But the new system had no basis here. So what we introduced here is just mockery of capitalism.

” But Schwarzenberg said a moral crisis came in the west in the 1960s also, with deep societal changes in 1968, adding that at that time, all the taboos fell – moral, sexual, and religious – as being oldfashioned prejudices.

“And when society changes, it changes completely,” Schwarzenberg explained. “Since there was sexual loosening, here was also financial loosening.”

One of his analogies was that before then ‘old banker gentlemen’ acted with the belief that the money wasn’t theirs or heir banks', but that the money belonged to others and therefore should be handled with care but they were replaced by a generation which grew up in the 1960s that handled others’ money like a merry young manin a casino.

“The basis of the crisis is therefore moral,” Schwarzenberg said. “It’s the loss of responsibility, the responsibility for omeone else’s assets.”

Schmögnerová agrees that the moral aspect played an important role in the emergence of the crisis.

“For sure all the people sitting here understand the importance of the moral aspect,” she said at the forum. “But those on the global level, who got the economy to where it is now, are deaf to the moral aspect.”

For that reason she believes there must be enforceable rules that would prevent what happened from happening again.

“There have to be ‘strong states’ that can enforce these rules,” she said, adding that there is anger among people, especially in western Europe, about what is happening; for instance, that some banks have decided to pay the same bonuses to their management as they did before the crisis.

According to her, there is an interconnection between the moral aspect and political decision-making – politicians should agree on going in the same direction while at the moment European leaders cannot reach consensus on whether to limit the actions of the banks or not.

“Even the best law cannot replace the moral rules, because every law can be avoided if one is clever,” Prince Schwarzenberg reiterated. “This is really about the moral basis.”