Is Christmas stronger than the economic crisis?

IN THE RECENT past, Christmas was a time of abundance for stores as well as shoppers. Last year, even though Slovaks had begun to feel the start of the economic crisis they did not allow it to spoil their Christmas and retail sales went on increasing. Market watchers expect that the strong tradition of enjoying Christmas in Slovakia will not change this year, even though Slovak customers have adopted some more economical shopping habits in response to the economic downturn. 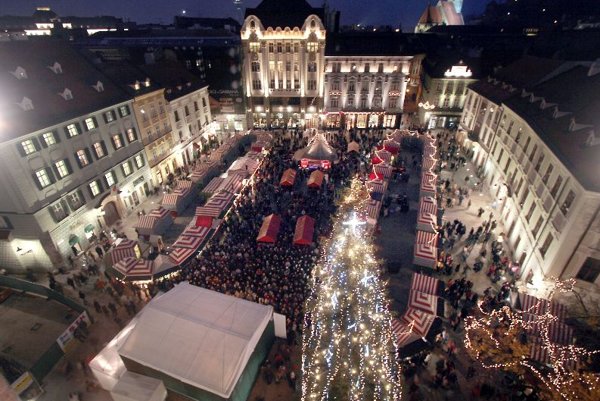 IN THE RECENT past, Christmas was a time of abundance for stores as well as shoppers. Last year, even though Slovaks had begun to feel the start of the economic crisis they did not allow it to spoil their Christmas and retail sales went on increasing. Market watchers expect that the strong tradition of enjoying Christmas in Slovakia will not change this year, even though Slovak customers have adopted some more economical shopping habits in response to the economic downturn.

Retail sales in December 2008 rose 3.2 percent in fixed prices when compared to December 2007, according to the Slovak Statistics Office. This was the second biggest increase in the European Union, with only Poland registering a higher year-on-year increase, 4.6 percent, in retail sales last December.

A survey conducted by the international accounting and consulting firm Deloitte in the autumn of 2009 indicates that the Slovak tradition of enjoying Christmas is stronger than the economic crisis. According to this survey, Slovaks plan to spend a total of €480 on Christmas, compared with the €600 European average.

Ľubomír Drahovský, a market analyst with Terno, a market survey agency, is less optimistic, predicting that average Christmas spending in Slovakia will be below €400.

“Slovakia is very regionally differentiated and the economic strength of households and individuals vary significantly across Slovakia,” Drahovský told The Slovak Spectator, adding that he cannot imagine higher spending in regions with 18-22 percent unemployment. “The average monthly wage before taxation is about €720 in Slovakia and it would be surprising as well as irresponsible for these people to spend more.”

The Deloitte survey shows that Slovaks have adopted a more cautious attitude to shopping. While last year only one third of Slovaks made a Christmas budget, this year as many as 55 percent said they want to plan what to spend their money on. They also prefer buying useful presents and want to avoid impulse purchases.

Jozef Orgonáš, the secretary general of the Slovak Association of Commerce and Tourism (ZOCR), believes that this year the Christmas season will not differ significantly from previous ones.


“It is likely that the volume of consumer goods sold, white and black goods, will decrease,” Orgonáš told The Slovak Spectator. “Sales of foodstuffs will not decrease, while in economically strong regions they may even increase.”

Some retail chains say they have reduced their prices this year. Tesco promises that the Christmas season in its stores will be much cheaper this year and Nay, a retail chain selling household electrical appliances, also reports lower prices for some goods.

“Prices of some kinds of food and consumer goods which people buy for Christmas have decreased significantly compared with last year,” Oľga Hrnčiarová, the corporate affairs manager of Tesco, told The Slovak Spectator. “Electrical appliances have become 10 percent cheaper compared to last year.”

Hrnčiarová expects that toys will be ‘in’ this year, as customers do not want to disappoint their children. Other popular goods include electrical appliances, DVDs, CDs, books, cosmetics, as well as clothing.

Nay sees that customers are hesitating more and being cautious when selecting goods, but according to Laura Ondriášová, manager for external communications for Nay, there is still one month left until Christmas and thus it is difficult to forecast how the situation will develop.


“This year it is very likely that customers will buy also large white goods, which are significantly cheaper than during previous years,” Ondriášová told The Slovak Spectator, while customers are in general interested in plasma TV screens, notebooks, home cinemas, and gaming. “Certainly small white goods, especially coffee machines, shaving and depilation apparatuses and hair technique, are the hits of this Christmas.”

A Slovak customer is the same as any other in Europe, according to Orgonáš of the Slovak Association of Commerce and Tourism.

“He is not loyal, he is demanding and aware, he knows his rights,” Orgonáš told The Slovak Spectator. “Alas, he responds less sensitively to specific campaigns to support the sale of Slovak products and he is strongly price-sensitive. The development in 2007 and 2008 started to indicate a change, but the economic crisis has again forced him to shop more according to the price level.”

Drahovský of the Terno agency agrees that the Slovak customer is sensitive to prices.

“The customer wants acceptable goods of an acceptable quality for a low price,” Drahovský told The Slovak Spectator, adding that this is behind the success of discount stores in Slovakia. Tesco, Billa and other established retail chains have responded with own-label goods to attract customers through these goods’ generally lower price and relatively sound quality.

“The Slovak customer responds very well to offers and sales by stores, but he is less mobile and has little time to think over all the offers,” Drahovský told The Slovak Spectator, explaining that it requires time to react effectively to offers advertised via store leaflets as one needs to compare the prices of goods with the leaflets of various stores and only then respond.


The number of loyalty cards in the wallets of Slovaks has been increasing too, but according to Drahovský many customers are confused by them and are not able to use all the advantages they offer.

“This also needs a certain development phase by the shopper in order for him to learn how to work with the cards in order for them to meet his expectations,” said Drahovský.

Surveys conducted by the Terno agency show that a working Slovak customer does not have time to shop carefully, and buys things impulsively. This means that he cannot benefit from advantages offered by shops. Moreover, according to Drahovský, Slovak customers leave necessary shopping to the very last moment and in such cases price is not the most decisive factor. Also, contrary to the habit of weekly or bi-weekly shopping abroad, in Slovakia the share of such customers is not yet so high. Slovaks with low mobility shop daily and only those with mobility shop once a week or every 10 days.