AFTER years of thirsting for various kinds of shopping centres, malls and galleries, the number of such facilities has mushroomed across Slovakia. Now shopping areas of various shapes, sizes and colours are scattered on the outskirts of cities as well becoming dominant close to their centres. But because international developers have focused their attention more in neighbouring countries in the past, market watchers see still space in Slovakia for new shopping facilities to be built. 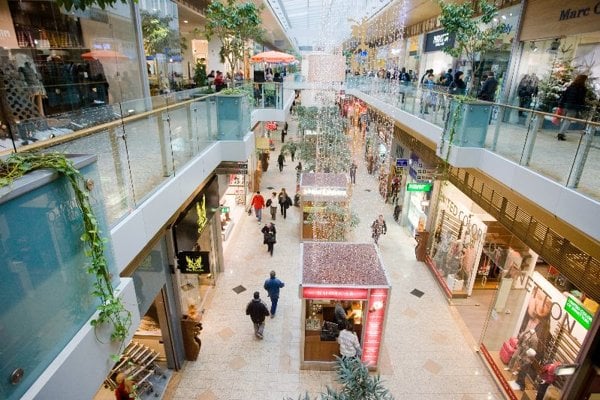 AFTER years of thirsting for various kinds of shopping centres, malls and galleries, the number of such facilities has mushroomed across Slovakia. Now shopping areas of various shapes, sizes and colours are scattered on the outskirts of cities as well becoming dominant close to their centres. But because international developers have focused their attention more in neighbouring countries in the past, market watchers see still space in Slovakia for new shopping facilities to be built.

Rafajlovič still sees many opportunities for new shopping areas in Slovakia, especially in the segment of retail parks and so-called High Street retail. He also believes that ambitious plans for expansion of retail spaces in some towns will materialise and that this will create pressure on weaker projects, regardless of whether these are new or existing centres.

In Slovakia and the Czech Republic, a traditional shopping centre is described as property serving the retail market which is managed as a whole unit with a total rental area exceeding 5,000 square metres and with 10 or more individual retailers, Rafajlovič explained to The Slovak Spectator.

A retail park can be defined as a project with three or more commercial outlets within one facility with a total space starting at approximately 5,000 square metres. A parking area, common for all shops within the park, is always part of such a project, Rafajlovič said.

During the first half of 2009, the retail shopping space in Slovakia amounted to nearly 150 square metres per 1,000 citizens, which was 70 percent of the European average, according to a report by Cushman & Wakefield published in September.

The global real estate advisor predicts the speed of new construction to have increased in Slovakia in 2009 and to increase again in 2010, pushing this ratio up to 85 percent.

According to Martin Biró, retail consultant in the Bratislava branch of the global real estate consultancy firm CB Richard Ellis (CBRE), the current situation in construction of new shopping spaces in Slovakia is distinguishable from the period of the biggest boom only by the fact that now it is more important than any time before that developers during the planning of the project pay close attention to factors which later, when marketing and operating the shopping area, will influence the success of its shopping facility.

“At question is especially a good locale and last but not least enough parking spaces,” Biró told The Slovak Spectator. “These days a customer has a choice from which to select and he or she picks a shopping centre where all these conditions are met.”

The experience of CBRE is also that when a city’s shopping market looks saturated there is still the opportunity to locate a new shopping centre there if it can better its competition with good transportation accessibility, a suitable mix of shops, good layout, enough parking places and good public transport.

The economic crisis has not only affected development of office buildings but also some shopping centres and parks. Market watchers said some schemes in various phases of construction within Slovakia were halted.

“Fortunately this is not the fate of all the projects,” said Biró of CBRE. “Those which were well planned and were not exaggerated are continuing successfully. The crisis has more significantly affected projects in regional areas in which the unemployment rate has increased and the purchasing power of the population has decreased – here many merchants are cautious and it is more difficult to arrange the pre-leasing necessary to obtain construction financing which is necessary to start building.”

According to Rafajlovič, projects which managed to arrange financing prior to September 2008 are generally under construction and will come onto the market in 2010. He expects that the crisis will be mirrored primarily in new construction which will be started late due to the inability to get loans as well as among projects which have been afloat so far but may lose key tenants because of lower spending by customers.

Several so-called fachmarktzenters for DIY fans also opened in various regions of Slovakia in 2009, according to Biró.

Next year the opening of the Pribina Gallery in Eurovea on the Danube embankment with a total area of 60,000 square metres is being anxiously awaited. Other projects include an Aupark Shopping Center and the Mirage in Žilina, the Arkadia in Prievidza, a Stop.Shop in Liptovský Mikuláš and extension of the Shopping Palace in Bratislava, a part of which opened earlier in 2009.

With regards to the future, Rafajlovič said that developers will be more cautious. “I think that from the viewpoint of the next development period a more long-term vision on the part of the developer will be of key importance,” Rafajlovič told The Slovak Spectator. “This will include cooperation with the tenants, experience from other projects, a more sophisticated concept from the aspects of operating costs and architecture and, of course, good management of the centre. In regions, there will be more shopping parks. And competition in towns will test the original concepts of developers, especially as the first five-year contracts end in most of the centres from the so-called second-wave of construction between 2004 and 2006.”