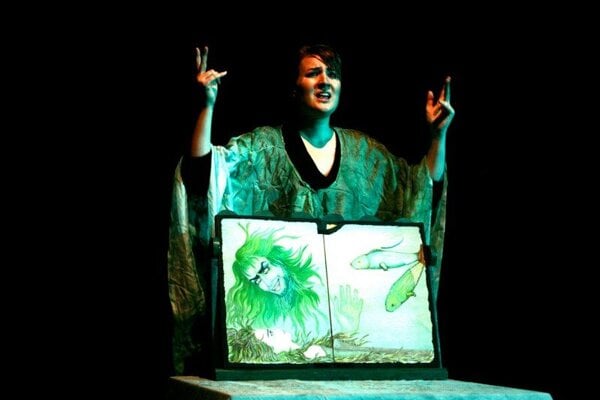 SIX theatre performances, a documentary screening and an international conference are on the programme of Error, or the International Festival of Homeless Theatres, which will be running in Bratislava on December 4 and 5. This event presents theatre ensembles featuring homeless actors from the four Visegrad countries: Slovakia, Hungary, Poland and the Czech Republic. The opening play, Silent Crime, starting on December 4 at 18:00, is a 10-minute experimental drama performed by the AHA Theatre from Budapest. All events will be held at Studio 12 at Jakubovo námestie 12 and the admission fee is voluntary. For more information go to www.divadlobezdomova.sk or call 02/5249-8508 . Photo: Courtesy of Error

Petjazz – Though small in terms of the number of guests, this mini-festival offers the best of the Slovak jazz stage.

Pandemonium Show – Neil Tennant and Chris Lowe, the famous British pop duo known as the Pet Shop Boys, who recently obtained a Brit Award for Outstanding Contribution to Music, arrive in Slovakia for the first time.

November ‘89 – The Slovak National Museum and its partners have prepared an extensive display focused on the main milestone in Slovakia’s recent history, the Velvet Revolution, including various photographs, posters, documents, and much more.

Vinum Laugaricio – For the fifth time in a row, Trenčín hosts this international competitive event celebrating the cult of wine, comprising lectures and tastings.

A JOINT exhibition by 10 Slovak artists has opened at the Central Slovak Gallery in Banská Bystrica and will be available until January 15. A part of the Intermedia.bb visual arts festival, Causa Corporalis is a selection of photographs, paintings, sculptures, installations and videos dealing with the motifs of body or corporeality. The fact that some of the exhibited works, namely those by Radim Labuda, Veronika Šramatyová and Patrik Illo, will soon be included in the gallery’s permanent collection proves that the authors, in spite of their comparatively young age, are already among the top local artists. Bethlen’s Palace at Dolná 8, which houses the display, is open Tuesday through Friday between 10:00 and 17:00, and on weekends between 10:00 and 16:00. Admission is €1.33. Further information is available at 048/4701-615 or www.ssgbb.sk. Photo: Courtesy of SSGBB

Bio-product – The Dance Studio, after having performed at numerous stages all around Europe, presents a new choreography by its founder Zuzana Hájková, exploring the theme of the “ecology of soul”.

The Goddess of Reason – Only a few days after the Slovak Sinfonietta celebrated its 35th anniversary, it presents another jewel, an operetta by 'Waltz King' Johann Strauss Jr.

The Bronze Odyssey – Bronze and glass sculptures, miniature pictures as well as large-scale paintings are included in this exhibition by Slovak artist Eva Fišerová.