'The World Under One Roof' was the slogan for Bratislava's traditional Christmas bazaar, which was opened by Slovakia's First Lady Silvia Gašparovičová in the city's PKO Culture and Leisure Centre on Sunday, November 22. 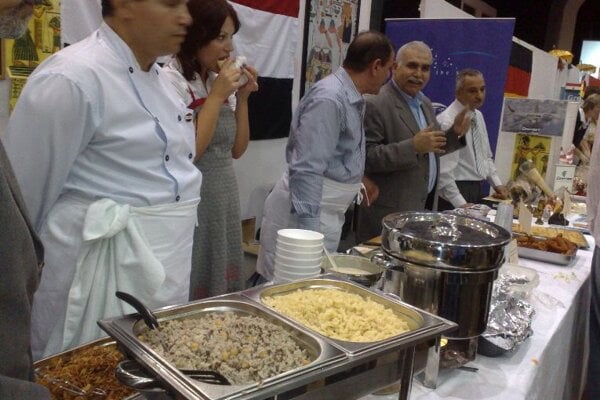 'The World Under One Roof' was the slogan for Bratislava's traditional Christmas bazaar, which was opened by Slovakia's First Lady Silvia Gašparovičová in the city's PKO Culture and Leisure Centre on Sunday, November 22.

The annual event aims to bring various cultures closer to people in Slovakia while raising funds for charity. This year, it moved from its traditional site in the Stará Tržnica, or Old Marketplace, in the city centre, which is undergoing reconstruction. The new venue is bigger, and attracted thousands of people eager to watch, smell, and taste different cultures.

“I believe that people will appreciate all kinds of culinary goodies this year too,” the wife of the Slovak president said at the ceremonial opening of the event. She said she hoped that the funds raised would help improve the lives of youngsters living in children’s homes, along with the ill, the mentally-challenged, and abused women and families all over Slovakia.

According to Zora Inka Groholová from the International Women's Club, which organised the bazaar, it is the largest joint event held by the diplomatic and international community in Slovakia. A total of 38 countries were represented this year, with an Israeli stall making its first appearance. Countries represented included Angola, Benin, China, Egypt, India, Indonesia, Korea and Turkey. The Bratislava City Office had a kiosk there, too, and Roma specialties were also available. “At the Christmas Bazaar, every embassy in Slovakia had its own stall where it sold products, souvenirs and various delicacies and specialties from its country. All the money raised has been given to the International Women's Club, which it then uses for charity purposes exclusively in Slovakia,” Groholová explained.

The International Women's Club is an organisation uniting women from all over the world that live in Slovakia for a longer period of time. It is a non-profit, non-political, and non-religious organisation. The Christmas Bazaar forms the highlight of its activities and is its largest event in Slovakia.