Eurovea and River Park near completion

Before the global economic crisis reached central Europe, Slovakia was hitting double-digit economic growth and it fed a zest by customers for luxury residences as well as confidence by real estate developers that they could sell whatever projects they put on the drawing board. During those years several projects catering to those with fat wallets started construction and several other projects entered the pipeline. 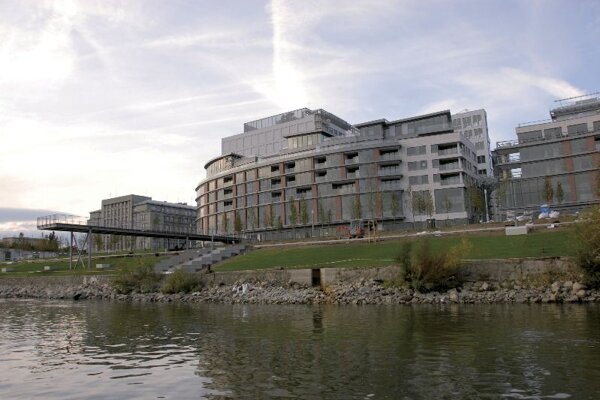 Eurovea is almost complete; local residents have shown the greatest interest but there are Russian and Austrian buyers too. (Source: Jana Liptáková)
Font size:A-|A+0

Before the global economic crisis reached central Europe, Slovakia was hitting double-digit economic growth and it fed a zest by customers for luxury residences as well as confidence by real estate developers that they could sell whatever projects they put on the drawing board. During those years several projects catering to those with fat wallets started construction and several other projects entered the pipeline.

But the economic downturn has brought both developers and potential buyers of luxury properties back down to earth. While developers now know that the available demand cannot gulp down everything coming on the market, potential buyers are also thinking twice before they sign on the dotted line of a real estate contract.

Despite the weakening in the luxury market, developers of two of the most well-known current luxury projects in Slovakia, Eurovea and River Park, on both ends of the Danube River embankment from the centre of Bratislava, are satisfied with the pace of sales in their developments, which are soon to be completely finished.

Peter Mriňák, general manager of Corpia Sotheby’s International Realty, a real estate agency focusing on luxury real estate in Slovakia, perceives the current situation in the market as a kind of normalisation or restoration of a saner situation.

“Many developers, under the influence of the global financial crisis, have realised that it is difficult to sell only luxury projects,” Mriňák told The Slovak Spectator. “Even during the summer of 2008 the Bratislava market was flooded with projects which presented themselves as luxurious.”

Now developers must curb their expectations, be satisfied with lower profit levels and think more about the middle classes which could not afford to buy an apartment in a new development or would become overly indebted when doing so, according to Mriňák.

“The market has sifted through the offers of luxury residential projects and those which remain are really upper-standard,” said Mriňák, adding that the current construction of luxury and larger apartments has been reduced and projects which have kept the veneer of luxury have had to adjust their properties to the new conditions on the market, i.e. both demand and prices have slackened.
Corpia Sotheby International Realty’s experience in Slovakia is that for its clientele the purchase of real estate is often a question of its social status and prestige. Most of Sotheby’s clients already own real estate and because they have enough available capital they are looking for something new, nicer, and more exclusive.

“A large proportion of our clients do not buy real estate as an investment, but rather for their own pleasure,” said Mriňák.

Luxury on the Danube


The two best-known luxury developments in Bratislava are nearing completion. Both are on the north bank of the Danube River. River Park by J&T Real Estate is to the west of city centre and just a few kilometres downriver the Eurovea project by Ballymore Properties anchors the other side of city centre. Construction for both projects was launched before the financial crisis surfaced but the two developers do not admit to any current problems and are satisfied with their sales of residences.

“We are continuing to sell apartments in River Park in spite of the stagnating market,” Pavel Pelikán, executive director of J&T Real Estate, told The Slovak Spectator. “More than 70 percent of the apartments are sold. In regards to the current market situation, we are satisfied with our sales.”

J&T Real Estate reduced prices of the apartments in River Park by 40 percent last autumn and since then has modified their price offer only slightly.

“We feel the crisis through a more cautious attitude of purchasers who think longer until they make a decision and, of course, in a reduced number of people who are eager to buy or are able to buy,” said Pelikán. “Since the River Park project is completely booked with future service providers, this gives us a great advantage compared to our competition.”

The first apartments, out of 203 available residences in River Park, will be handed over to their new owners at the beginning of 2010. A five-star hotel, shops, restaurants and office space are also part of the River Park development.

The apartments and prices as of October 5 on the River Park website lists that the cheapest available unit at €190,040 for 84.8 square metres with a 3.4-square metre loggia, including value added tax (VAT). The most expensive residence on offer spreads over two floors with 596.4 square metres includin a balcony and a terrace totalling 282.4 square metres. It is available for €2,772,700 including VAT.

The sale of apartments in the Eurovea project is also meeting the expectations of its developer, Ballymore Properties. There will be a total of 254 apartments of various sizes from studios up to penthouses.

“At the current time more than 50 percent of the apartments and penthouses are sold,” Patrícia Hradilová, spokesperson of Residential Ballymore Properties, told The Slovak Spectator. “Especially during the last few months interest has increased significantly and we have witnessed a large increase in new clients.”

The project is close to being finished and the opening of the whole complex, including its five-star hotel, shopping galleries and offices, is scheduled for the spring of 2010.

Similar to River Park, where most purchasers are Slovaks, Ballymore reports the greatest interest from local residents, but there are buyers and interest also from Austria, Russia and Germany.

According to Hradilová, the economic crisis has not affected the construction of Eurovea, but Ballymore, like other developers, started to more carefully watch the cost side of the project and has looked for effectiveness in its expenditures.

The crisis has brought at least one novelty: along with fully completed and equipped residences developers are also offering so-called bare apartments with lower prices. These apartments are sold without interior doors, final floor finishes, tiling and other amenities, leaving the final completion of the apartments to their owners according to their tastes as well as the thicknesses of their wallets.

Another development described by its developer, Orco Property Group, as luxurious is called Parkville. It consists of apartment buildings overlooking Bratislava from the city’s Koliba hillside and was completed in 2008. Despite its exclusive building materials and the villas being sensitively nestled into the natural surroundings of Koliba as well as winning the Construction and Investment Journal’s award as the Best Residential Development and best Overall Development in Slovakia in 2008, less than one-half of its 92 apartments have found owners so far, according to its website.

How to define luxury

Andrej Lehocký, director of the consulting division at Colliers International in Slovakia believes that it is necessary to formulate a new definition for the luxury segment in Bratislava and not to do so only by price level.

“For me, a luxury real estate segment is only emerging here,” Lehocký told The Slovak Spectator. “I really hold an opinion different than our developers. The term ‘luxury project’ can be connected to Bratislava with only a very few projects.”

According to Lehocký, the quality of life in the Slovak capital is decreasing and the city suffers from a significant non-culture of quality construction. And while prices of some projects were comparable with Vienna, the look and quality of the two cities are significantly different.

“This means that prices of Bratislava’s luxury projects would have been pushed down even without the crisis,” said Lehocký. “Maybe at the beginning speculators would buy some properties, but prices at the level of €5,000-€8,000 per square metre without VAT were utopian. Developers overestimated the Slovak market.”

Lehocký believes that the way pursued by some developers – to add a few luxury benefits but to keep the prices high is not sustainable in Slovakia.

“Our consumers are price-sensitive,” he said. “You will attract them the most with a lower price. This means that the developers can test various marketing tools for further short while, but this will not draw a lot of customers. From the longer-term point of view it is necessary to adjust prices to the purchasing power of our citizens.”

THE Future of luxury in Slovakia

“We are preparing other similar projects with a good locality and with, in particular, a comprehensive offer of services like those to be provided by River Park,” said Pelikán. “Without services, a project cannot be labelled as luxurious. Golden door handles or high-standard materials and equipment are not a definition of luxury.”

At this time Ballymore is fully focused on completing the first part of Eurovea complex while the second part is in the planning phase.

Mriňák of Corpia Sotheby’s International Realty views the current nature of the Slovak luxury market as being saturated but foresees a new phase.

“We expect that within the foreseeable future some really luxurious projects will arrive on the market which will be constructed based on the imagination and requirements of concrete clients,” said Mriňák. “Such projects are common abroad but have been missing so far in Slovakia.”