Bratislava’s location next to two of Slovakia’s neighbours, Austria and Hungary, has helped boost the real estate market in foreign villages close to the borders. Over the past few years Kittsee, Wolfsthal, Rajka, Mosonmagyaróvár and others have become cheaper, and in other ways advantageous, alternatives to the Slovak towns and villages surrounding Bratislava. Real estate experts working in this segment say the impact of the crisis on them hasn’t been huge and they are expecting business in this area to grow further in the future. 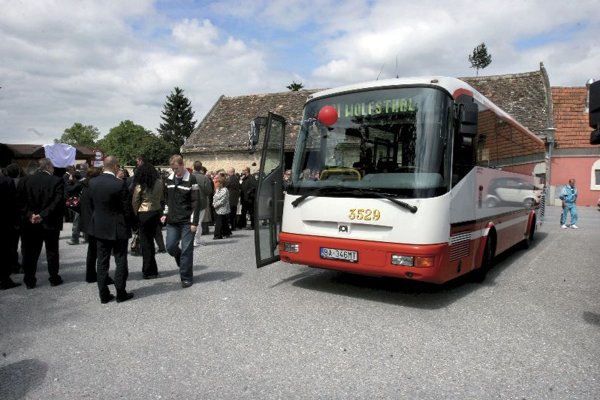 Bratislava’s location next to two of Slovakia’s neighbours, Austria and Hungary, has helped boost the real estate market in foreign villages close to the borders. Over the past few years Kittsee, Wolfsthal, Rajka, Mosonmagyaróvár and others have become cheaper, and in other ways advantageous, alternatives to the Slovak towns and villages surrounding Bratislava. Real estate experts working in this segment say the impact of the crisis on them hasn’t been huge and they are expecting business in this area to grow further in the future.

It is not just the more adventurous Slovaks who now consider buying property in Austria or Hungary close to Bratislava these days, according to experts.

“Nobody regards our clients as adventurers any more,” Monika Haklová and Martin Kollár, partners in the Immobiliengroup real estate agency in the Austrian village of Kittsee, told The Slovak Spectator, explaining that Slovaks are now better informed and more experienced in this area.

“Given the constantly increasing number of Slovaks in the Austrian borderland it’s clear to everyone that there’s ‘something’ about it.

Their groups of clients form a whole spectrum of people – from young childless couples interested mainly in small rental apartments to pensioners looking for weekend houses. The most numerous, however, are families of 25-35 years of age with one or two children who are selling a flat in Bratislava and want to build a family house in one of the Austrian villages near the border, the Immobiliengroup representatives said.

Henrieta Lukovicsová from the Remax Real Centrum, a Bratislava-based real estate agency which focuses on selling properties in Hungary, mainly in the town of Mosonmagyaróvár, defines her clients similarly, saying the situation has changed over time.

“At the start, only Hungarian-speakers were buying properties in Hungary, but now more and more Slovaks who don’t speak a word of Hungarian are moving in, as in Mosonmagyaróvár they can use also English or German but also Slovak in daily communication,” she told The Slovak Spectator.

All types of clients are showing interest in Hungarian properties, she said – from young people searching for smaller flats, to families with children, who tend to look for middle-category family houses, and people seeking luxury dream-houses. Clients have also recently started showing an interest in construction lots where they can build houses according to their wishes.

Hungary is still cheap for Slovaks

“Hungary is attractive for Slovaks more and more in my opinion,” Lukovicsová told The Slovak Spectator. “For about three years now they’ve been buying properties in Hungary, many Slovaks live there already. The most attractive location is perhaps the town of Mosonmagyaróvár, mainly for its good location [about 20 minutes from the centre of Bratislava], but also for its very good infrastructure, supermarkets, public transport, taxis, restaurants with good food and low prices, a beach, a thermal pool and its green environment.”

The prices, however, remain the main advantage of Hungarian properties, as they are much lower than in Bratislava. Due to the financial crisis the situation has changed a little bit, but for the better for Slovak buyers. Hungarians unable to pay their mortgages are selling their properties and that means a better selection for Slovak clients, according to Lukovicsová.

“Everybody can afford to buy a property here and they still have money left for a car or other things,” she said. “For the price of a 3-room [2-bedroom] flat in Bratislava you can buy an above-standard detached house in Hungary.”

Another advantage is the calm and pleasant environment of the Hungarian border villages and towns and their quick and easy access to Bratislava.

“Many clients tell me that they come home and feel like they are on holiday,” Lukovicsová said.
Angelika Majthényi from Talea real estate agency, based in Mosonmagyaróvár, agrees that living in the Hungarian border area is convenient.

“The infrastructure is being developed and the quality of services is on the rise,” she told The Slovak Spectator. “And, importantly, there are no traffic jams on the roads to Bratislava.”
Both Majthényi and Lukovicsová believe that the Slovaks will show more and more interest in buying properties in Hungary.

“I expect the interest to remain, mainly due to interesting projects that are under way,”

Lukovicsová said. “We are now preparing construction lots: some 70 lots on an area of 5 hectares with a thermal water heating system. The price for such lots will be about €33 per square metre.”

The municipal authorities have also reacted to the fact that there are now many people working in Bratislava but living outside the city, in Hungarian or Austrian villages. The city's public transport company, DPB, launched its first scheduled cross-border service, the 901 bus line, to the Austrian village of Wolfsthal. In March 2009 it was extended to run as far as the Austrian town of Hainburg.

A similar bus service, the 801 to Rajka, intended to meet the needs of Bratislavans who have moved to Hungary, should be launched with the help of EU funds in autumn 2009. The line should run to the railway station in Rajka so as to provide a connection to the train which links, the Hungarian villages of Hegyeshalom, Level and the town of Mosonmagyaróvár.

'Billig' is not popular anymore

Austria, just like Hungary, remains attractive for Slovak clients, because despite a slight increase in prices property there continues to be cheaper than on the Slovak side of the border.

“I even dare to say that prices only rose thanks to the close vicinity of Bratislava and will remain under the influence of the rise or fall of ‘Bratislava’ prices, while always remaining lower,” Haklová told The Slovak Spectator. “This market emerged as an alternative based on the demand for real estate at reasonable prices around Bratislava.”

According to Haklová and Kollár, one effect of the financial crisis was the introduction of slightly stricter conditions for getting a mortgage from Austrian banks, which now require a 25-30 percent deposit from the buyer. On the other hand, interest rates are even more attractive now than in the past. A secondary problem has been the stagnation of the real estate market in Slovakia, which has prevented Slovaks from buying property in Austria and thus slowed the whole purchasing process.

“Recently we have, however, noted an improvement also in this area, which we regard generally as a good signal,” Haklová said. “Besides, all the stimuli [of the market] remained, so with no hesitation we can say that Austria has been and continues to be interesting for Slovaks. The environment, the distance from Bratislava, the culture, the social system, the system of financing and care for [EU] citizens all remain on a very high level.”

Preferred locations have also remained unchanged – apart from the news that interest in properties in Vienna is on the rise. Nevertheless, Hainburg, Kittsee, Wolfsthal and Berg remain the leaders. Kittsee and Hainburg in particular are affected by the demand for property and there are several new projects in development or already on sale in these locations.

Access to and infrastructure for transport from the Austrian border area remains an advantage too. From Wolfsthal, Bratislava can be reached easily in 10-15 minutes, compared to the hour it can take to travel into the city from Rovinka or Malinovo, the nearest villages in Slovakia with comparable real estate prices.

Haklová said the fact that the Austrian state offers families low-interest loans with a 0.5-percent interest rate to build houses is also a great advantage. In Kittsee (in Burgenland state) a family can get €40,000 plus €11,000 per child; a four-member family can get €62,000, with a monthly payment of €48. In Hainburg (in Niederosterreich state) the base is about €19,500, with another €4,000 if the client is under 35 and then €6,000 for the first child, €8,000 for the second child and €10,000 for the third child. There are also other kinds of state support, such as allowances for heat pumps, solar panels, etc.

“In addition, in Austria the family allowances are 10 times higher than in Slovakia,” Haklová said. “Children learn German and English at schools, which is beneficial for their future. Importantly, in 2011 Austria will open its labour market and Slovaks will be able to get employment there without any problems. Lots of our clients are buying properties in Austria for this reason as well.”

The official opening of a road connection between Kittsee and Kopčianska Street in Bratislava's Petržalka district is being prepared, but at the moment the road is closed for legal reasons. Kittsee and other surrounding villages are within an ideal radius around Bratislava, with prices almost half those in comparable Slovak ones.

Experts say clients have changed their priorities lately. Until recently buyers were looking for older family houses of up to €100,000. Now they are starting to look for quality, which shows in the rapid increase of interest in construction lots in ‘new’ projects.

“‘Billig’ [cheap in German] is not popular anymore,” Haklová and Kollár said. “The prices of ready-made houses are about €1,200 to €1,300 per square metre. Another segment are projects by construction associations who are relatively fast to react to demand for flats with good financing. What until recently used to be a kind of sale is now turning into industrial projects with a focus on the Slovak client.”