Sufficient office space is on the market

The current tight-fisted approach of banks to financing new real estate projects is likely to leave fingerprints on the way the market for office space will look in the upcoming years, market watchers agree. 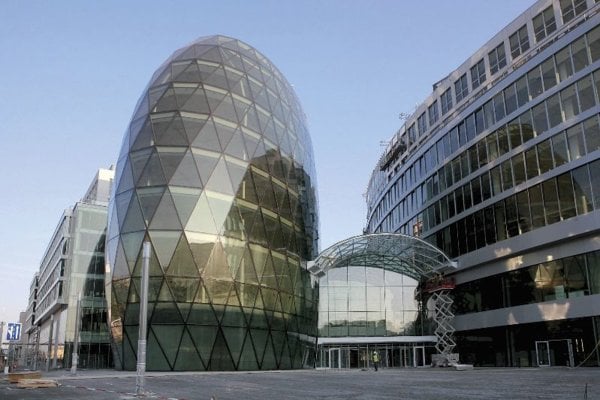 The current tight-fisted approach of banks to financing new real estate projects is likely to leave fingerprints on the way the market for office space will look in the upcoming years, market watchers agree.

The global economic downturn has forced many companies to downsize and thus has reduced their appetite for new office space, slowing down this market segment which had in previous years experienced golden times. The projects which are currently underway must be finished regardless of any financing difficulties but new projects face a rather tough time when potential tenants look at every single euro when considering their expenditures and bankers are more careful about the projects to which they will lend.

“The projects underway are being downsized if it is possible to do so,” Andrej Džurňák, head of Centrum Bývania, the real estate unit of Tatra Banka Group, told The Slovak Spectator. “There are also efforts to split some developments into additional phases.”

The Lakeside project in Bratislava, where only one of four planned towers has been built, stands as a reminder of the slowdown in the office building segment. The three remaining towers have not yet broken ground and the developer has finished only 25,000 square metres of the originally-planned 90,000.

“They are still having problems renting the office space that has been built,” Džurňák told The Slovak Spectator.

Banks are reconsidering their funding of development projects, Džurňák added.

The market for office buildings has been reacting to the credit crisis in a number of different ways, according to Victoria Miller, associate director of the valuation advisory office at CB Richard Ellis.

“There is a slowdown in the longer-term pipeline of office stock,” Miller told The Slovak Spectator. “This is in part because banks are not looking to agree to new financing except where pre-leasing is in place and also because some decision-makers are unsure of how the market will react so they are hesitating. They would prefer pre-leasing to be in place to ensure that the construction is viable.”

Džurňák expects no change in this trend in the coming year. Róbert Prega, chief analyst of Tatra Banka, agrees and suggests there will be only a slight increase in business in 2010.

“Growth in the real estate market may be slow when it comes to planning new projects and the demand for new developments,” Prega told The Slovak Spectator. “The actual slowdown in construction of new buildings may result in a shortage of office space in the future.”

Many large companies have been forced to downsize and for that reason currently need less office space. Because of this they are renting smaller spaces in the city centre which are more affordable. The available office space has swollen and rental prices of vacant properties have slumped.

“The space where a company offers its products or services is essential in many businesses,” Džurňák said. “Therefore, if a company is able to get better business space for a better price in the city centre, there is no problem for it to relocate.”

According to Andrej Churý, the CEO of the RE/MAX Elite real estate agency, larger companies tend to locate their headquarters in the city centre and operational divisions are often placed in city outskirts or even in another city.

“Only stable businesses are located in the city centre,” Churý said.

Available office space is not down

Total office space in the Slovak capital exceeded 1.233 million square metres at the end of the first half of 2009. The highest rate of unoccupied space, at 15 percent, was in the inner districts (excluding the city centre). Office space in this part of the capital accounted for 48 percent of the city’s total, according to the Bratislava Research Forum (BRF), which consists of three major real estate firms: Cushman & Wakefield, CB Richard Ellis and Colliers International.

In choosing their office space, companies have different motivations. Some need to be in the city centre to be accessible to a larger number of customers while others require less-expensive space with easier access out of town, said Miller.

“There is also the consideration that companies like to use office space which reflects the values of their firm,” Miller said. “So, an architectural firm usually prefers something a little “quirky” and artistic and often a traditional company prefers a building that looks more conventional. A bank which stresses its stability will demand appropriate, long-established office premises. An embassy seeking new offices will focus more on safety and security.”

As for current trends, Miller said that clients are now most interested in open-plan office spaces with glass separators, often for the meeting rooms as well. Building amenities and equipment which companies are seeking include hidden electrical and data cables under the floors, modern lifts, a high number of parking spaces, facilities such as canteens, restaurants, shops or gyms in the area or within the building, and quality air conditioning and heating systems, she added.

“The statement that location is the most important factor is still true,” Miller said. “For office space, this often comes down to a consideration of cost; and moving an office or having too large an office also has high costs.”

As for Bratislava’s ability to absorb new office space, Miller confirmed that in the past there had been a shortage of high quality office space but that not only have new offices been built but older office buildings have been renovated as well.

Some older office buildings have been refurbished into residential properties or the building site has been considered for redevelopment in some instances, Miller added.

According to Miller, the Bratislava market absorbed a considerable amount of new or renovated space per capita in comparison to other cities. She also admitted that some real estate projects went wrong and subsequently little interest is shown by potential tenants.

”However, it isn’t very common,” she emphasised.

There is enough office space

Andrej Churý, CEO of RE/MAX Elite real estate agency in Bratislava shared his views on the market for office properties with The Slovak Spectator.

The Slovak Spectator (TSS): Is the market for office space still active here despite the crisis?
Andrej Churý (ACH): The market for commercial real estate has slowed down; we have to wait and see what comes in the future, in which direction the market will move and whether it will be attractive to investors and developers. Personally, I feel that there is enough office space available in some parts of the market and in other parts there is even more space than the market demands. This might slow down construction of new office space in the future.

TSS: Can we expect a turnaround anytime soon?
ACH: No, I don’t predict a notable change in the near future.

TSS: How do you assess interest in office space?
ACH: Interest in office space rentals is stable despite the fact that the market has slowed down. The average prices range from €7 to €20 per a square metre. The average price per square metre in the city centre is approximately €15. The price also depends on the quality and standard of the office building.